A quarter of the U.S. population is vaccinated. So why are COVID-19 cases still rising?

A few states are leading the rise, but experts are hopeful the U.S. is at a turning point 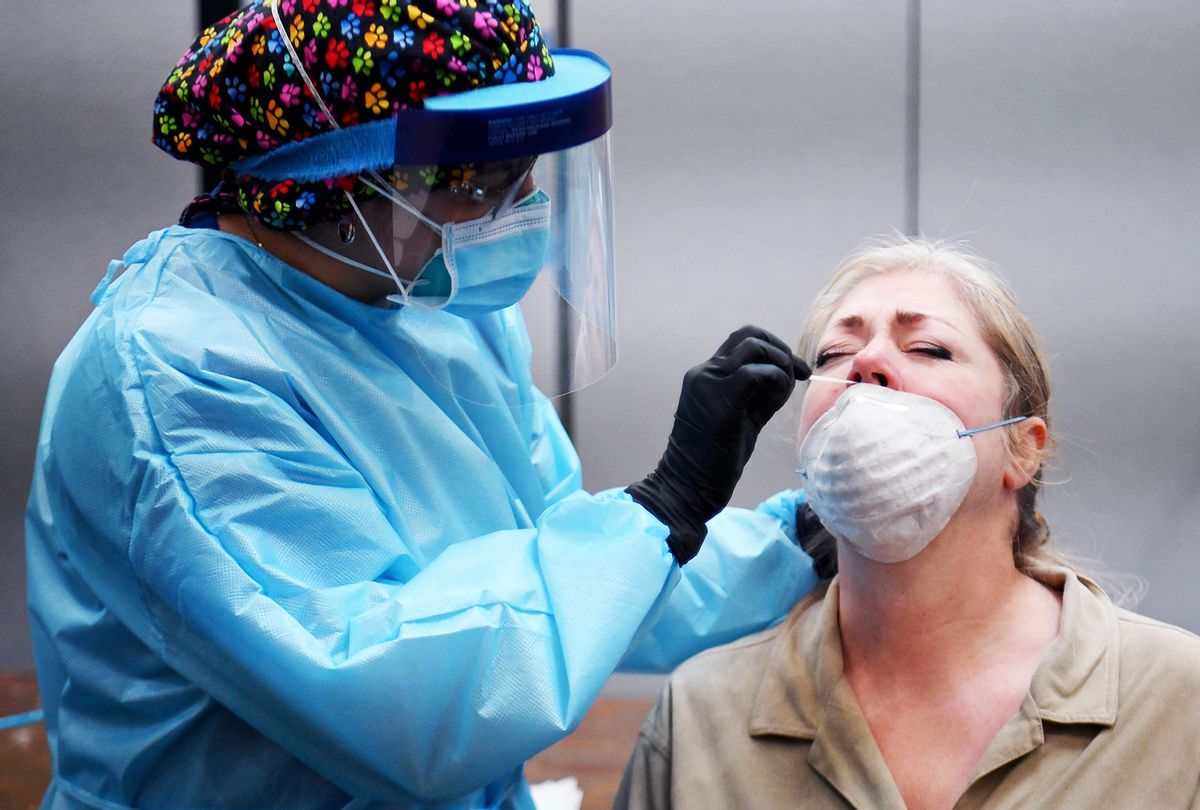 A healthcare worker takes a nasal swab sample from a resident to test for COVID-19 at The Abyssinian Baptist Church in the Harlem neighborhood of New York City on May 13, 2020. (ANGELA WEISS/AFP via Getty Images)
--

On Monday, Dr. Rochelle Walensky, director of the Centers for Disease Control and Prevention (CDC), warned that the country's seven-day average of COVID-19 cases hit 67,440 cases day. That was a marked increase from a month ago — when, as Walensky noted, the seven-day average was "just over 53,000 per day.

"Sadly, the seven-day average of daily deaths are now increasing, with six consecutive days of increases, to about 695 deaths per day," Walensky said.

The slow rise in COVID-19 cases around the country might appear incongruous with another basic public health fact: in the same span of time, tens of millions more Americans have been fully vaccinated against the novel coronavirus, which causes COVID-19. According to CDC, more than 50 percent of U.S. adults 18 and older in the U.S. have received at least the first dose of the vaccine; nearly 25 percent of the population is fully vaccinated. As Walensky noted on Monday, that means more than 84 million are fully vaccinated; and of the vaccinated, the U.S. has had less than 6,000 "breakthrough infections" in which fully vaccinated individuals tested positive for COVID-19.

Given the rapid rollout of vaccinations, the news about a rise in cases might seem very peculiar. Indeed, shouldn't cases start to decline as more people get vaccinated?

Dr. Amesh Adalja, a senior scholar at the Johns Hopkins Center, said the reasons for this are related to demography — specifically, who has been vaccinated, and who hasn't.

"If you look at the demographics of the cases that are occurring, they're often in that twenties to thirties age group which has largely not been vaccinated," Adalja said. "I think it's going to take some time for cases to go down as the vaccine penetrates into that population."

Indeed, until this week, availability in all states was based primarily on age brackets; only now are COVID-19 vaccines available to people in their 20s and 30s. And indeed, younger adults appear to be the ones being infected. Last week, the Conway Daily Sun in New Hampshire reported that younger people were accounting for nearly half of the new COVID-19 cases in the state. Young people are also believed to be driving surges in states like Michigan, where young people are getting hospitalized.

Adalja said he thinks the U.S. will see cases fall when more of the population is vaccinated — perhaps around 40 percent, which he says may be an inflection point.

"All you have to do is look at a country like Israel where they've been able to vaccinate a huge proportion of their population, and once they got to around 40 percent or so, you started to see cases fall," Adalja said. "It's hard to know exactly when we're going to cross that threshold because the threshold will be crossed by a combination of natural infection, as well as vaccine-induced immunity."

Adalja noted that "one of the biggest obstacles now is going to be vaccine hesitancy."

Monica Gandhi, an infectious disease doctor and professor of medicine at the University of California–San Francisco, told Salon it is hard to make sweeping generalizations about this trend across the country because of how the pandemic varies around the country. "It's like there are almost 50 different pandemics going on across the country," Gandhi mused.

Gandhi noted that 50 percent of new cases are coming from a few states: Minnesota, Michigan, New York, Florida and Pennsylvania. One metric Gandhi keeps her eye on is what she refers to as the "hospitalization per case rate," which tracks the number of cases that lead to hospitalizations.

Gandhi said, however, that large numbers of younger people getting infected will lead to an uptick in hospitalizations, too. Gandhi also pointed to Israel as an example of how the U.S. could expect to reach a turning point.

The spread of highly transmissible variants might be playing a role in the increase in cases across the country, but Gandhi said it's likely not the only reason why. The COVID-19 strain known at B.1.1.7., which was first identified in the United Kingdom, is believed to be 40 to 70 percent more transmissible.

"I'm sure that I'm sure in places where B.1.1.7 is circulating, and that was true in Israel as well, it does seem to have increased transmissibility and I'm sure it is contributing,"  Gandhi said. "However, that cannot be the only reason, because there are places that have equally high percentages of variants and do not have the surges."

Gandhi said another contributing factor to the rise across the U.S. could be the propensity for people to gather, along with the degree of natural immunity in a state's population. But she said she's hopeful could be nearing the "inflection point" where cases start to decrease nationwide.