Derek Chauvin verdict: How the crack in the blue wall of silence should be exploited

From Rodney King to George Floyd, what progress in policing has been made over the last 30 years in the U.S? 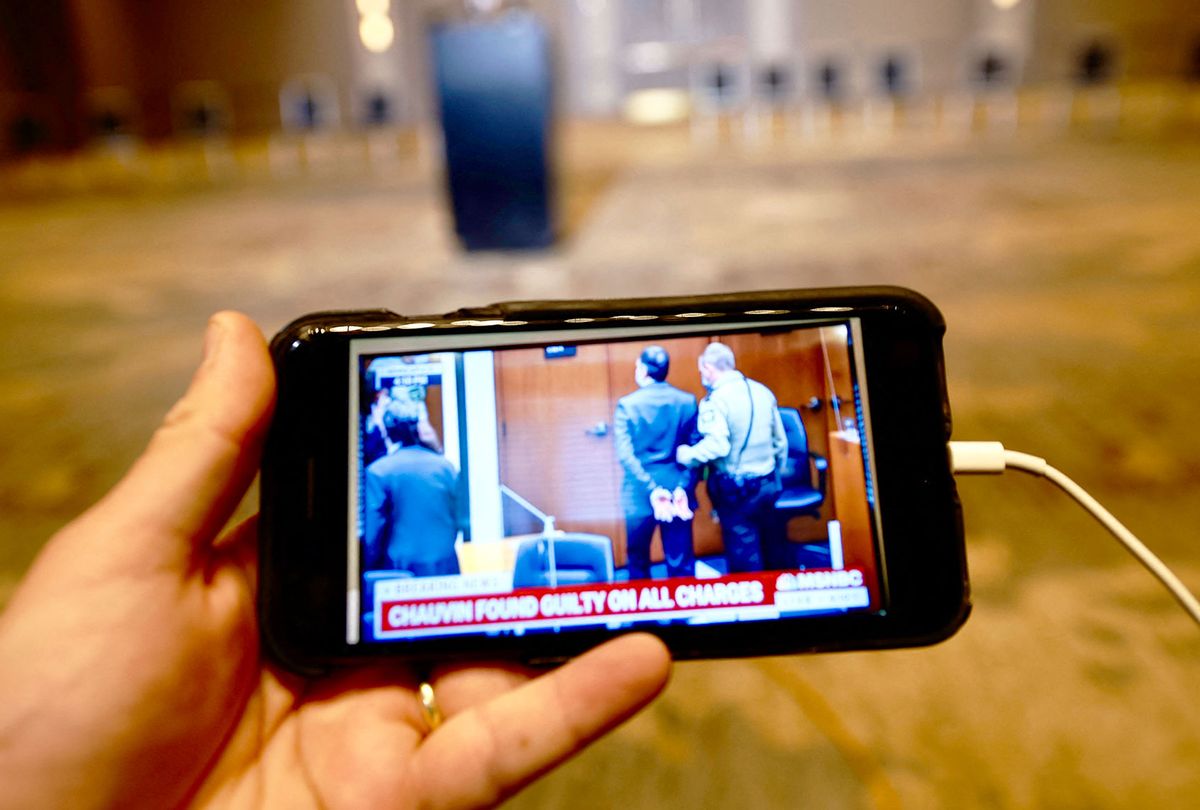 A journalist watches their mobile phone showing Derek Chauvin taking back into custody after the verdict in his trial over the death of George Floyd has been announced in Minneapolis, Minnesota on April 20, 2021. - Sacked police officer Derek Chauvin was convicted of murder and manslaughter on april 20 in the death of African-American George Floyd in a case that roiled the United States for almost a year, laying bare deep racial divisions. (KEREM YUCEL/AFP via Getty Images)
--

30 years ago last month I was watching the 11 o'clock news in LA and a grainy black and white video came on that shocked me and shocked the conscience of the entire world. It showed a group of policemen, bathed in the harsh glare of their vehicle headlights, viciously tasering and beating a Black man on a deserted street while several others stood by and watched. There had been police beatings on television before, of course. We saw many of them during the civil rights and Vietnam War protests. But this was different. This video showed what the police did when they thought no one was looking, validating their victims' accusations of police brutality, which were routinely dismissed as the complaints of combative criminals who resisted arrest.

We soon knew the name of the victim: Rodney King, a name which will go down in history because of that awful incident and everything that happened afterward. The Los Angeles Times chronicled the escalating horror as the nation grappled with what we were seeing and the reaction from the leaders of the community was swift. The mayor, the city council and even the police chief, a notorious fellow named Darryl Gates, all called for the cops to be prosecuted, an unusual response to say the least. That videotape put into doubt the officers' initial account of what happened that night in which they described a wild man they suspected of being on PCP, spitting and violently resisting arrest. Rodney King got out of his car and almost immediately laid face down on the pavement. A witness said, "the officers were all laughing and chuckling, like they had just had a party."

The four cops who meted out the worst brutality on King were put on trial in a suburban enclave known for being the home of half of the LAPD. The blue wall of silence was strong and the cops on the scene defended their colleagues' actions, insisting that King was resisting and the accused were justified in their actions. The defense made the case that you cannot believe your eyes when you see something on video by slowing it down, offering alternative explanations for their clients' actions.

The sympathetic jury found the cops not guilty and everyone knows what happened next. All of us who were living in LA at the time have stories to tell about what the next few days were like. Let's just say the city exploded and nobody in it was shocked except the police.

I've been thinking about that time ever since George Floyd was murdered almost a year ago in Minneapolis. Once again we only know what happened that day because the incident was videotaped by a bystander and we were able to see and hear exactly what happened. The police report was just as dishonest as the report in the Rodney King case three decades before and even more inexplicable since the cops in Floyd's case knew their actions had been recorded. They must have believed they were immune from the law they were charged with upholding.

This time the reaction to the tape sparked global protests against police brutality, following the precepts of the already established Black Lives Matter movement. The authorities took quick action and indicted Derek Chauvin, the man who stared at the camera with dead eyes as he ground his knee into George Floyd's neck for over nine minutes, snuffing the life from him. The police reform movement took on new urgency as this grotesque display of authoritarian brutality, echoed by dozens and dozens of previous such incidents filmed by witnesses and police body cams, seemed to be the last straw.

But when I thought of the Rodney King beating and everything that happened after, I had to wonder whether we'd made any progress in that time other than providing witness to the violence, sort of the way people used to gather to witness executions by the state (or lynchings by the KKK). Yesterday, I think we got an answer. Yes, there has been a little progress after all.

The trial of Derek Chauvin was impressive. They managed to seat a jury that accurately reflected the community. The defendant had professional counsel. The judge was fair and the prosecution did its job which is often not the case in cases where police are on trial since prosecutors and cops see themselves as being on the same team. Perhaps most importantly, the blue wall evaporated and police testified against Chauvin with clear compelling testimony, declaring that what he did was unacceptable. (If only one of the cops on the scene had raised those objections and knocked Chauvin off of Floyd's neck, the man might be alive today.)

In other words, we saw a fair trial of a police officer. And instead of the video being used to create reasonable doubt as the defense successfully did in the Rodney King case, the video was the star witness and it convicted Derek Chauvin.

Crowds gathered all over the country last night upon word of the verdict. Rather than the days of rage we experienced in 1992, this time people were able to hug each other in relief that a little bit of justice was done for once. They could hold candlelight vigils and silent marches for George Floyd and instead of feeling impotent in the face of this ongoing struggle for equality and dignity for Black Americans they could feel a little hope that maybe it's just possible that things can change.

But nobody in those crowds felt this verdict meant that the job was done. President Biden and Vice President Harris both gave eloquent, heartfelt speeches promising to take up the mantle of police reform. Civil rights leaders and politicians pledged to keep the pressure on. But most impressive were the people in the streets yesterday telling the media that they planned to keep protesting, keep filming, keep demanding that this country finally live up to its purported ideals and create a system of justice in which all people are treated equally and fairly. None of them think it is going to be easy. But they are not going to stop trying.

People gathered at the scene of the outbreak of the Rodney King uprising in South Central Los Angeles yesterday too. And they said some things were better:

It shouldn't have taken 30 years to get there but considering it's a centuries-old problem, at least it's a start.