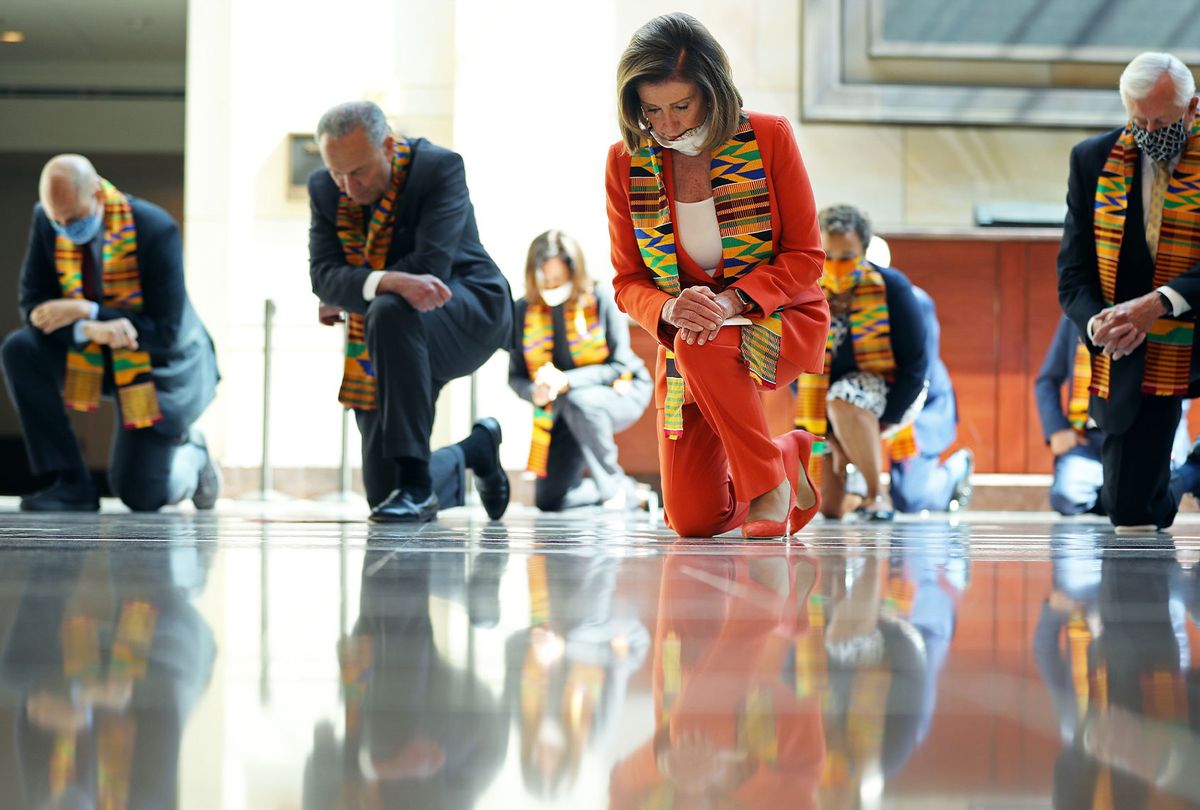 On Tuesday, after a three-week trial, Minneapolis police officer Derek Chauvin was found guilty of murdering George Floyd, a 46-year-old Black man who Chauvin pinned to ground on suspicion of passing a counterfeit $20 bill until Floyd died of "asphyxiation from sustained pressure." Chauvin's conviction, a rare occurrence when it comes to the prosecution murder by police, drew a wide variety of responses from both the left and right, many of which received vicious backlash.

At a Tuesday press conference following the verdict, House Speaker Nancy Pelosi, D-Calif., delivered remarks with members of the Congressional Black Caucus. "Thank you, George Floyd, for sacrificing your life for justice," Pelosi declared. "Because of you and because of thousands, millions of people around the world who came out for justice, your name will be synonymous with justice."

Pelosi's statement, far from her first gaffe, was widely panned as tone-deaf, but she appeared to just shrug it off.

The NFL's Las Vegas Raiders also caused quite a tizzy when they tweeted out: "I CAN BREATHE 4-20-21." The tweet, reportedly inspired by what Floyd's brother Philonise told reporters following the verdict ("Today, we are able to breathe again because justice for George means freedom for all."), received a sharp rebuke online. NBA player Lebron James retweeted the post: "This is real???? Nah man this ain't it at all. The F^%K!!!!"

New York City Mayor Bill De Blasio also expressed unsolicited thoughts over Twitter that drew widespread criticism. "In June we watched in horror as Derek Chauvin took the life of George Floyd. The reality of racism in this nation finally hit a boiling point, the pain of more than 400 years of injustice. Today, justice was served." De Blasio, who defended the New York Police Department after its officers rammed into protestors with a car last summer, was raked through the coals by many on the left for whom the violent incident was still fresh in the mind.

Chauvin's conviction saw a lot of glib rhetoric from right-wing media as well. Ben Shapiro, conservative radio host and long time purveyor of the gish gallop, retweeted CNN anchor Don Lemon's tweet ("Justice has been served") and replied, "We all know he would never have said this had the reverse verdict been reached."

Shapiro's retweet was widely mocked online and heavily ratioed by left-wing political commentator Hasan Abi, who rebutted: "almost like there's a difference between a murderer going free and not."

Other right-wing provocateurs gave their two cents. "George Floyd is not and will never be a name that is synonymous with justice," tweeted Black conservative pundit Candace Owens. "He victimized TOO MANY people during his life." Tomi Lahren, known for her particular animus toward Black-led demonstrations of any kind, raged, "You got your justice so I'd assume there will be peace in Minneapolis tonight? No rioting? No looting? No harassing officers?"

"Is the Foot Locker safe tonight?" Lahren continued. "Should be, right? Justice, right? No need to steal in the name of George Floyd anymore, right?"

Political satirist Jeremy Newberger responded, "Feels like your mouth is the foot locker, as every time you open it, your foot goes right inside."