Why this trial was different: Experts explain what guilty verdict for Derek Chauvin means for police

Scholars of policing, law and race explain the landmark guilty verdicts handed down in Chauvin's trial 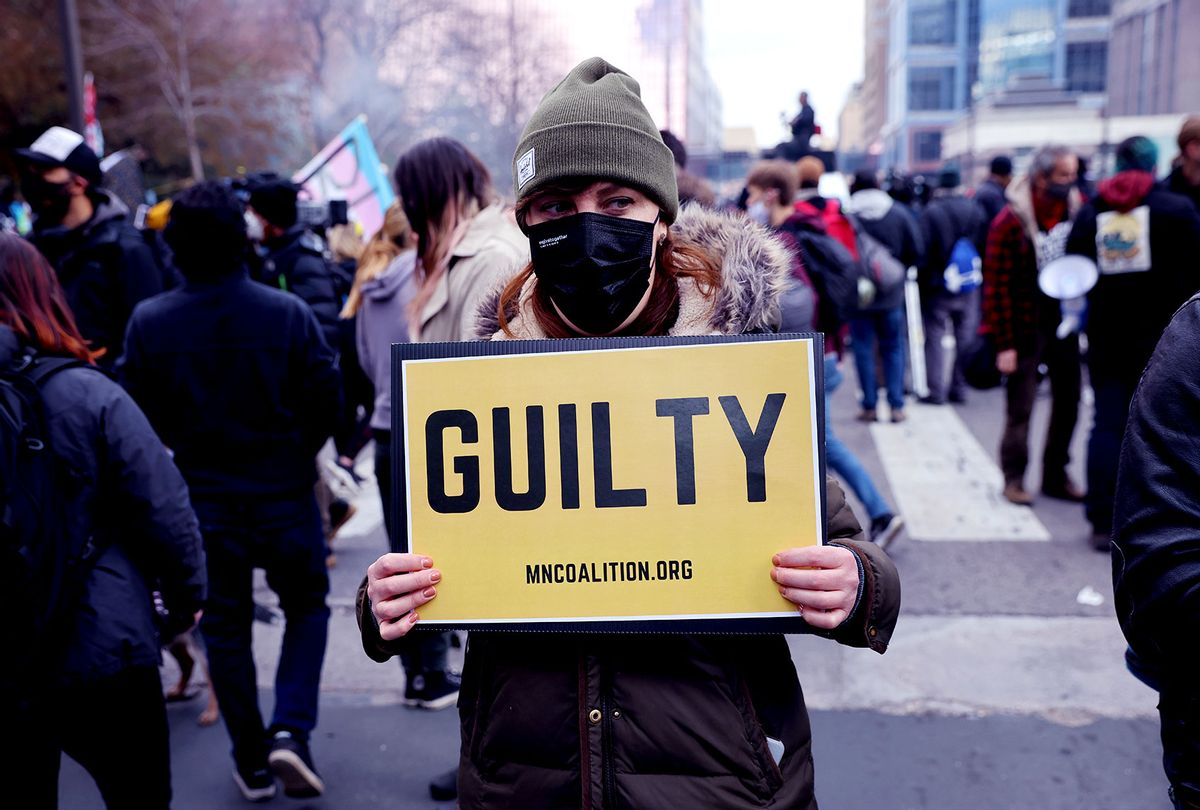 People react after the verdict was read in the Derek Chauvin trial on April 20, 2021 In Minneapolis, Minnesota. Former police officer Derek Chauvin was on trial on second-degree murder, third-degree murder and second-degree manslaughter charges in the death of George Floyd May 25, 2020.  After video was released of then-officer Chauvin kneeling on Floyd’s neck for nine minutes and twenty-nine seconds, protests broke out across the U.S. and around the world. The jury found Chauvin guilty on all three charges. (Scott Olson/Getty Images)
--

Scholars analyze the guilty verdicts handed down to former Minneapolis police officer Derek Chauvin in the 2020 murder of George Floyd. Outside the courthouse, crowds cheered and church bells sounded – a collective release in a city scarred by police killings. Minnesota's attorney general, whose office led the prosecution, said he would not call the verdict "justice, however" because "justice implies restoration" – but he would call it "accountability."

Race was not an issue in trial

Derek Chauvin's criminal trial is over, but the work to ensure that no one endures a tragic death like George Floyd's is just getting started.

It is fair to say that race was on the minds of millions of protesters who took to the streets last year to express their outrage and pain in response to the killing. Many felt it was impossible for someone who wasn't Black to imagine Chauvin's brutal treatment of George Floyd.

But race went practically unmentioned during the Chauvin trial.

This should not be surprising, because the criminal legal system writes race out at virtually every turn. When I led a lawsuit as a civil rights attorney challenging the New York Police Department's stop-and-frisk program as racist, the department's primary defense was that it complied with Fourth Amendment standards, under which police officers need only "reasonable suspicion" of criminal activity to stop someone. Presence in what police say is a "high-crime area" is relevant to developing reasonable suspicion, as is a would-be subject taking flight when being approached by a police officer. But the correlation with race, for a host of reasons, is obvious to any keen observer.

American policing's most pressing problems are racial ones. For some, the evolution of slave patrols into police forces and the failure of decadeslong reform efforts are proof that American policing is irredeemable and must be defunded. For others, changes to use-of-force policies and improved accountability measures, like those in the proposed George Floyd Justice in Policing Act, are enough.

Different communities across the country will follow different paths in their efforts to prevent another tragic death like George Floyd's. Some will do nothing at all. But progress will be made only when America as a whole gets real about the role of race – something the legal system routinely fails to do.

Derek Chauvin had his knee on George Floyd for 9 minutes, 29 seconds.

Why this trial was different

The guilty verdicts in the Chauvin trial are extraordinary, if unsurprising, because past incidents of police lethal use of force against unarmed civilians, particularly Black civilians, have generally not resulted in criminal convictions.

In many cases, the prosecuting office has been reluctant or halfhearted in pursuing the case. Prosecutors and police officers work together daily; that can make prosecutors sympathetic to the work of law enforcement. In the Chauvin case, the attorney general's office invested an overwhelming amount of resources in preparing for and conducting the trial, bringing in two outside lawyers, including a prominent civil rights attorney, to assist its many state prosecutors.

Usually, too, a police officer defendant can count on the support of other police officers to testify on his behalf and explain why his or her actions were justified. Not in this case. Every police officer witness testified for the prosecution against Chauvin.

Finally, convictions after police killings are rare because, evidence shows, jurors are historically reluctant to substitute their own judgment for the split-second decisions made by trained officers when their lives may be on the line. Despite the past year's protests decrying police violence, U.S. support for law enforcement remains very high: A recent poll showed that only 18% of Americans support the "defund the police" movement.

But Chauvin had no feasible argument that he feared for his life or made an instinctive response to a threat. George Floyd did nothing to justify the defendant's brutal actions, and the overwhelming evidence presented by the prosecutors convinced 12 jurors of that fact.

Like other high-profile police killings of African Americans, the murder of George Floyd revealed a lot about police culture – and how it makes interactions with communities of color fraught.

Derek Chauvin used prohibited tactics – keeping his knee on Floyd's neck when he had already been subdued – to suffocate a man, an act the jury recognized as murder. Three fellow Minneapolis Police Department officers watched as Chauvin killed Floyd. Rather than intervene themselves, they helped him resist the intervention of upset bystanders and a medical professional. They have been charged with aiding and abetting a murder.

The police brotherhood – that intense and protective "thin blue line" – enabled a public murder. Police Chief Medaria Arradondo, unusually, broke this code of silence when he testified against Chauvin.

Research shows that even if officers see a fellow officer mistreating a suspect and want to intervene, they need training to teach them how to do so effectively. The city of New Orleans is now training officers to intervene. Once training is in place, police departments could also make intervention in such situations mandatory.

When some officers stand by as other officers ignore their training, the consequences can be dangerous – and potentially lethal – for civilians.

This verdict reflects a little-known truth about Minneapolis: As the city and metro region have become Blacker and more diverse, police violence against Black people has intensified. This is not to suggest that things have always been good for Black Minneapolis residents. Indeed, Minneapolis' Black population – a group without political power or visibility – has faced segregation, police violence and Northern Jim Crow policies in its downtown music venues for decades.

White Minnesotans and Minneapolitans developed a false belief that somehow they were above racism; that their form of neighborliness known as "Minnesota nice" was an antidote to anti-Blackness and that – most of all – race didn't matter in a place as nice as Minnesota.

That false assumption was easy to believe when the Black population was small, contained and largely out of sight. But Black Minneapolis' population growth in recent decades, and the torrent of police violence that has followed, proved otherwise.

The murder of George Floyd last year and Daunte Wright's killing in a nearby community last week demonstrate that despite the state's liberal posture and Lutheran ethic, institutional anti-Black racism is as Minnesotan as ice fishing, untaxed groceries and "ya, sure, youbetcha" memes.