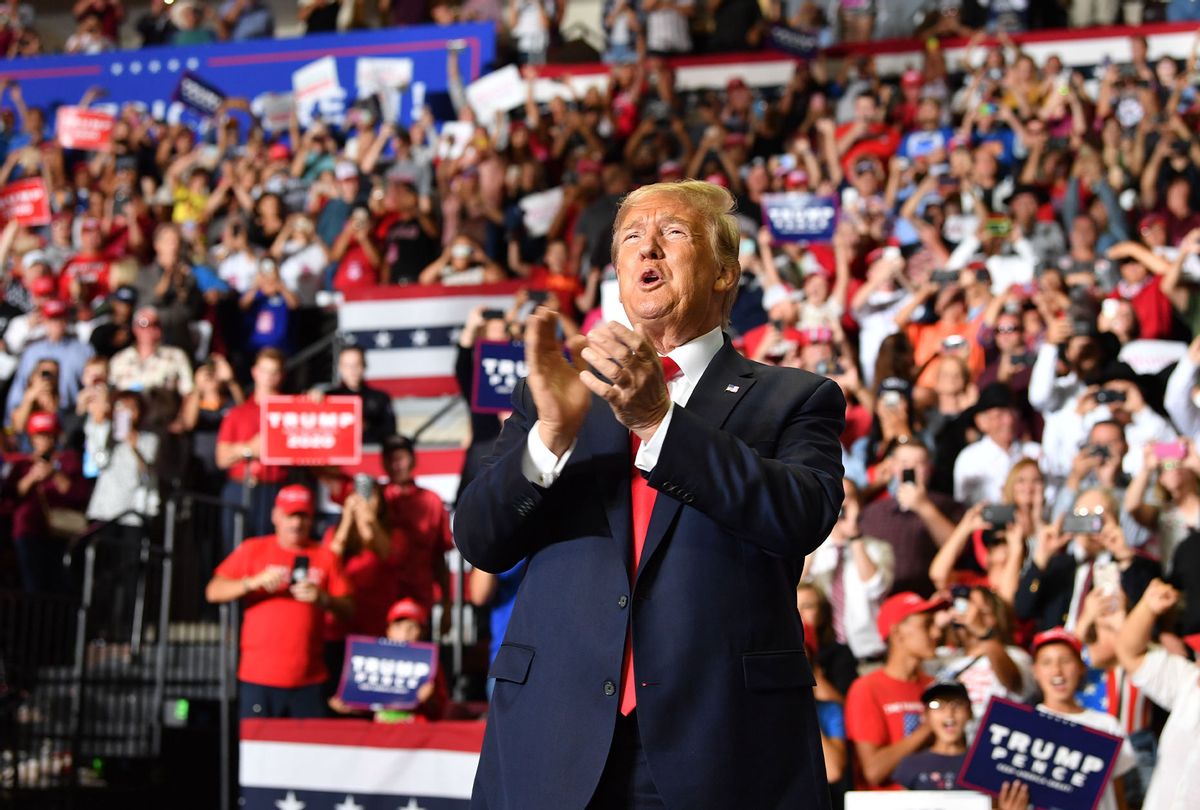 The city of Albuquerque, New Mexico, has referred the Trump campaign's unpaid rally debt to a collections agency, according to Mayor Tim Keller.

Trump left office with nearly $2 million in unpaid bills from cities that hosted his campaign rallies, including a $211,175 invoice from Albuquerque, stemming from his 2019 event in Rio Rancho.

"We decided to bill him because the costs to the city were tremendous," Keller told The Daily Show's Jordan Klepper this week. "They made us shut down downtown. We had to close City Hall. … In my mind, he owes us a lot more because there were about a day and a half where we couldn't even function as a city."

The bill includes costs for extra police protection, security measures and paid leave for city employees who were forced to stay home. But as of roughly 18 months later, Keller said that "no phone calls have been returned, so we hired a collection agency."

"He should be getting these annoying voicemails that we get, usually from scam companies where it's like,'You owe debts,'" Keller joked. "I think Mar-a-Lago is now getting those calls."

Keller told local news outlet KOB-TV that the city treated the unpaid Trump invoice "like any other debt" after the city got "no response" to its requests for payment. He said that like many creditors, the city automatically refers outstanding debts to collection agencies.

The city is also working to collect the debt, sending its latest bill to Mar-a-Lago instead of to the Trump campaign office in New York.

"They are still pursuing it, as recently as this month," city spokeswoman Lorena Sanchez told the Albuquerque Journal.

Sanchez said Trump's debt is one of more than 2,500 that the city has referred to collections, which it typically does for invoices more than 61 to 90 days old.

Trump left office with at least $1.82 million in unpaid rally debt to 14 cities, according to a 2020 analysis by the Center for Public Integrity, including a $543,000 bill from Minneapolis for a rally in October 2019.

Minneapolis Mayor Jacob Frey, a Democrat, said the money could have helped hundreds of families amid the coronavirus pandemic and business shutdowns.

"During this crisis, that loss is even more pronounced — $150,000, for instance, could pay for emergency rental assistance for 100 Minneapolis families," Frey told Public Integrity.

Trump also owes more than $430,000 in police bills to El Paso, Texas, stemming from a February 2019 rally, which prompted officials to charge the campaign with late fees, to no avail. Tuscon, Arizona, has also waited more than four years for the campaign to pay its $82,000 debt.

Most of the costs stem from the costs of additional police to provide security for Trump's rallies.

"Is it fair to say Donald Trump has effectively defunded the police?" Klepper asked Keller.

"You could say that," Keller replied.

The Trump campaign claimed in a statement to Public Integrity last year that it was not responsible for the costs to cities, arguing that "all billing inquiries should go to the Secret Service." But Secret Service officials said they "receive no funding from Congress to reimburse municipal governments for the local public safety protection they request," according to the report.

Many of the cities that hosted Trump's rallies did not bill his campaign, according to Public Integrity, which noted that some localities have policies against such bills while others "didn't bother because of Trump's history of nonpayment." In those cases, local taxpayers are forced to foot the bill.

Trump has a long history of refusing to pay his bills going back to the 1980s, when he refused to pay undocumented workers who worked on his Trump Tower project. Since then, he has stiffed hundreds of contractors and even his own lawyers, according to an investigation by USA Today.

Trump's campaign committee still had more than $18 million in cash on hand after the 2020 election, while the joint fundraising committee that the ex-president shares with the Republican National Committee has raised hundreds of millions since mid-October, little of which went toward funding Trump's baseless legal challenges. The campaign has been forced to refund more than 530,000 donations worth over $64 million after online donors complained about scam tactics that drained their bank accounts each month without their knowledge, The New York Times reported earlier this month.

Keller said he doesn't expect Trump's campaign to pay the Albuquerque bill, even though the city sent it to a collection agency.

"Given what else has happened, I mean in terms of even his own campaign owing money to donors and lots of shady stuff there, so, unfortunately, I don't really expect us to get paid," he told KOB-TV. "But ... you know, we would do it for anyone else, so he's no different."