New deluxe remix set features an incredible 159 tracks, along with a well-researched and lushly illustrated book 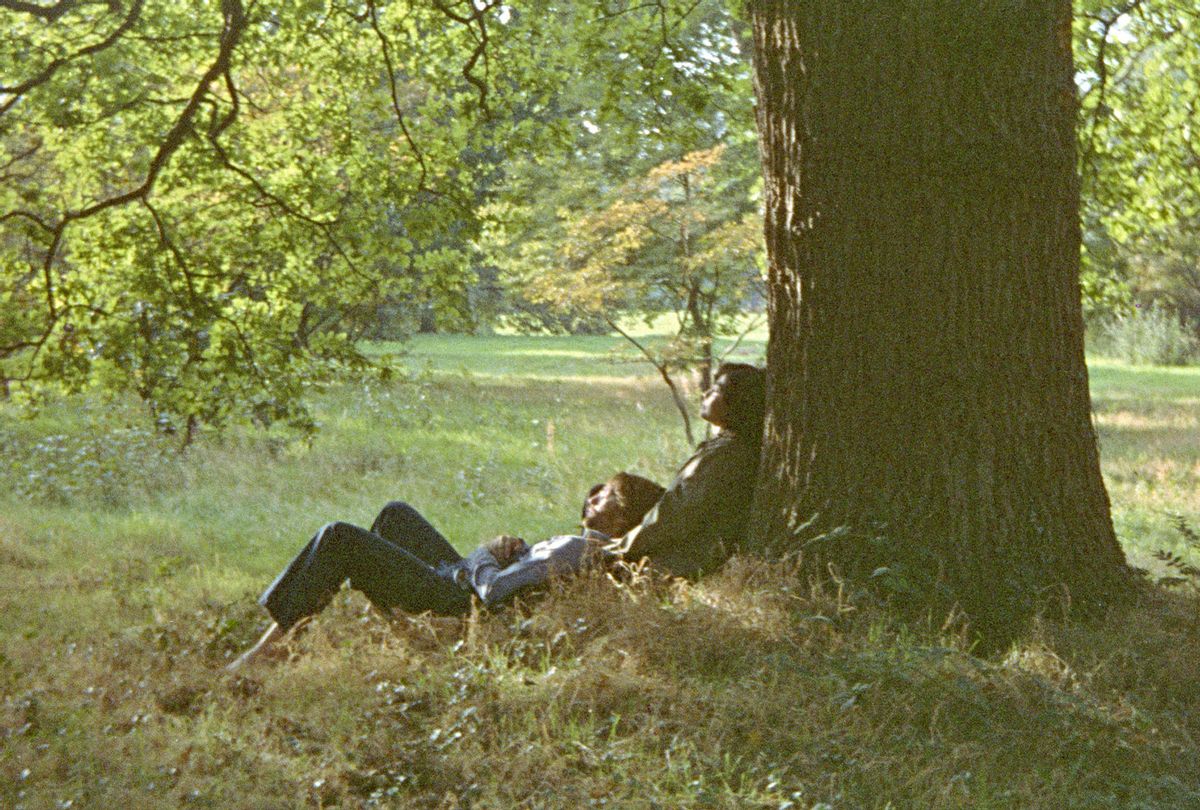 Restored from the original Kodak 126 Instamatic square-format negaive, this photograph was used as the cover shot for the original twelve-inch vinyl LP John Lennon / Plastic Ono Band. Based on an original drawing by John, it features John & Yoko photographed underneath a huge oak tree in the gardens of their home at Tittenhurst Park, Ascot, Berkshire, autumn 1970. For the cover of the companion album, Yoko Ono / Plastic Ono Band, John & Yoko swapped positions. (Dan Richter/Universal Music Group)
--

When it comes to the vaunted world of remixes and deluxe boxed sets, the Lennon camp has, once again, proven itself to be the top of the class.

With the release of "John Lennon/Plastic Ono Band (The Ultimate Collection)," Yoko Ono, Sean Lennon, and their team have taken great pains to afford music lovers with a premier version of the original LP. With crisp new mixes and high production values, the collection reminds us why "Plastic Ono Band" has stood the test of time as one of the great post-Beatles solo albums.

And for the folks out there who enjoy a deep dive into the making of such landmark LPs, "Plastic Ono Band" is not only a superlative specimen—it's an overwhelming one. The deluxe edition features an incredible 159 tracks, along with a well-researched and lushly illustrated book.

In her preface to the book, Ono writes that "with the Plastic Ono Band albums, John and I liked the idea of this really raw, basic, truthful reality that we were going to be giving to the world. We were influencing other artists, giving them courage, giving dignity to a certain style of vulnerability and strength that was not accepted in society at the time. It was a revolution for a Beatle to say, 'Listen: I'm human, I'm real.' It took a lot of courage for him to do it."

In its essence, the beauty of the "Plastic Ono Band" remixes finds its origins in this same ethic of presenting a "truthful reality." This aspect of the collection is especially well-revealed by the Elements and Raw Studio mixes that fans have come to expect from the newer Lennon releases, as evidenced by the recent deluxe set associated with Lennon's "Imagine" LP. As the name implies, the Elements mixes afford listeners with musical highlights, while the Raw Studio mixes draw listeners into the original moment of studio creation.

Take the remixes for "Love," for example. With each new iteration, listeners to the Plastic Ono Band remixes are treated to successive recordings that chart the song's painstaking growth in the studio. What is especially appealing about providing new mixes at such a granular level is the manner in which we are able to experience hitherto unrealized nuances of sound and meaning. With "Love," a song already rife with its own inherent beauty, we are provided with the capacity for experiencing new layers of aesthetic bliss.

By way of contrast, a track such as "God" seems to emerge with new, previously unheard levels of passion as the song builds to its powerful crescendo. This is especially true during the middle section, when Lennon offers his litany of disbelief against such historical figures as John F. Kennedy and Jesus Christ — even the Beatles, in the song's emotional climax. The remixes provide a new window into our understanding of the song's construction, particularly the ways in which Lennon and his bandmates summon the musical forces that drive one of his most vital solo compositions into the stratosphere.

In short, the "Plastic Ono Band" remixes not only celebrate the LP's original release back in December 1970; they provide music lovers with a lasting memorial to one of rock's greatest albums. Indeed, the remixes afford listeners with the opportunity to find new vistas of meaning with each return visit. That's truly a remarkable achievement for any work of art, no matter the genre. But with "Plastic Ono Band," we're privileged to discover that—a mere 50 years after its original release—the journey has only just begun.