Brexit has reopened an old battle over Northern Ireland's identity, leading to clashes in the street 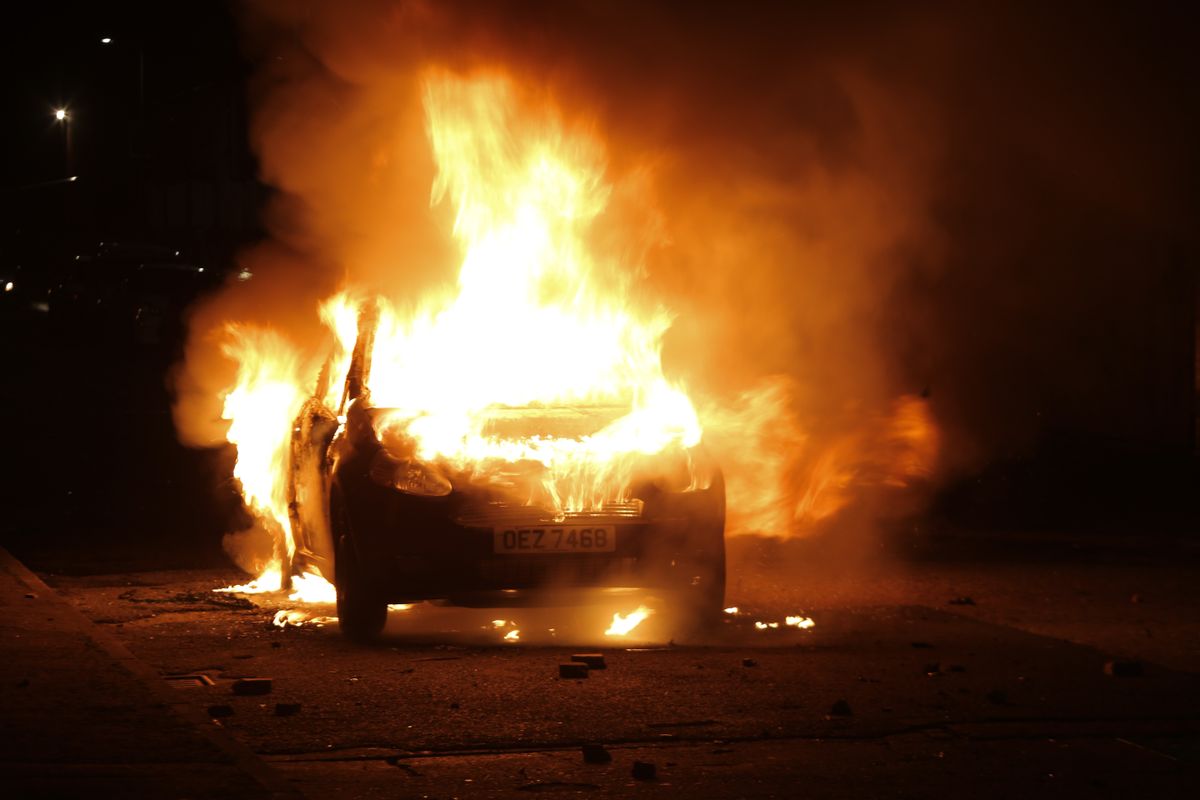 Sectarian rioting has returned to the streets of Northern Ireland, just weeks shy of its 100th anniversary as a territory of the United Kingdom.

For several nights, young protesters loyal to British rule — fueled by anger over Brexit, policing and a sense of alienation from the U.K. — set fires across the capital of Belfast and clashed with police. Scores have been injured.

U.K. Prime Minister Boris Johnson, calling for calm, said "the way to resolve differences is through dialogue, not violence or criminality."

But Northern Ireland was born of violence.

Deep divisions between two identity groups — broadly defined as Protestant and Catholic — have dominated the country since its very founding. Now, roiled anew by the impact of Brexit, Northern Ireland is seemingly moving in a darker and more dangerous direction.

The island of Ireland, whose northernmost part lies a mere 13 miles from Britain, has been contested territory for at least nine centuries.

Plantations offered settlers cheap woodland and bountiful fisheries. In exchange, Britain established a base loyal to the British crown, not to the Pope.

England's most ambitious plantation strategy was carried out in Ulster, the northernmost of Ireland's provinces. By 1630, according to the Ulster Historical Foundation, there were about 40,000 English-speaking Protestant settlers in Ulster.

Though displaced, the native Irish Catholic population of Ulster was not converted to Protestantism. Instead, two divided and antagonistic communities — each with its own culture, language, political allegiances, religious beliefs and economic histories — shared one region.

Whose Ireland is it?

Over the next two centuries, Ulster's identity divide transformed into a political fight over the future of Ireland.

These fights played out in political debates, the media, sports, pubs — and, often, in street violence.

By the early 1900s, a movement of Irish independence was rising in the south of Ireland. The nationwide struggle over Irish identity only intensified the strife in Ulster.

The British government, hoping to appease nationalists in the south while protecting the interests of Ulster unionists in the north, proposed in 1920 to partition Ireland into two parts: one majority Catholic, the other Protestant-dominated — but both remaining within the United Kingdom.

Irish nationalists in the south rejected that idea and carried on with their armed campaign to separate from Britain. Eventually, in 1922, they gained independence and became the Irish Free State, today called the Republic of Ireland.

In Ulster, unionist power-holders reluctantly accepted partition as the best alternative to remaining part of Britain. In 1920, the Government of Ireland Act created Northern Ireland, the newest member of the United Kingdom.

In this new country, native Irish Catholics were now a minority, making up less than a third of Northern Ireland's 1.2 million people.

And when Northern Ireland seated its first parliament in May 1921, nationalist politicians did not take their elected seats in the assembly. The Parliament of Northern Ireland became, essentially, Protestant — and its pro-British leaders pursued a wide variety of anti-Catholic practices, discriminating against Catholics in public housing, voting rights and hiring.

By the 1960s, Catholic nationalists in Northern Ireland were mobilizing to demand more equitable governance. In 1968, police responded violently to a peaceful march to protest inequality in the allocation of public housing in Derry, Northern Ireland's second-largest city. In 60 seconds of unforgettable television footage, the world saw water cannons and baton-wielding officers attack defenseless marchers without restraint.

On Jan. 30, 1972, during another civil rights march in Derry, British soldiers opened fire on unarmed marchers, killing 14. This massacre, known as Bloody Sunday, marked a tipping point. A nonviolent movement for a more inclusive government morphed into a revolutionary campaign to overthrow that government and unify Ireland.

The Irish Republican Army, a nationalist paramilitary group, used bombs, targeted assassinations and ambushes to pursue independence from Britain and reunification with Ireland.

Longstanding paramilitary groups that were aligned with pro-U.K. political forces reacted in kind. Known as loyalists, these groups colluded with state security forces to defend Northern Ireland's union with Britain.

The troubles subsided in April 1998 when the British and Irish governments, along with major political parties in Northern Ireland, signed a landmark U.S.-brokered peace accord. The Good Friday Agreement established a power-sharing arrangement between the two sides and gave the Northern Irish parliament more authority over domestic affairs.

The peace agreement made history. But Northern Ireland remained deeply fragmented by identity politics and paralyzed by dysfunctional governance, according to my research on risk and resilience in the country.

Violence has periodically flared up since.

Then, in 2020, came Brexit. Britain's negotiated withdrawal from the European Union created a new border in the Irish Sea that economically moved Northern Ireland away from Britain and toward Ireland.

Leveraging the instability caused by Brexit, nationalists have renewed calls for a referendum on formal Irish reunification.

For unionists loyal to Britain, that represents existential threat. Young loyalists born after the height of the troubles are particularly fearful of losing a British identity that has always been theirs.

Recent spasms of street disorder suggest they will defend that identity with violence, if necessary. In some neighborhoods, nationalist youths have countered with violence of their own.

In its centenary year, Northern Ireland teeters on the edge of a painfully familiar precipice.