Republicans from Marjorie Taylor Greene to Donald Trump Jr. are angry about something that isn't true — again 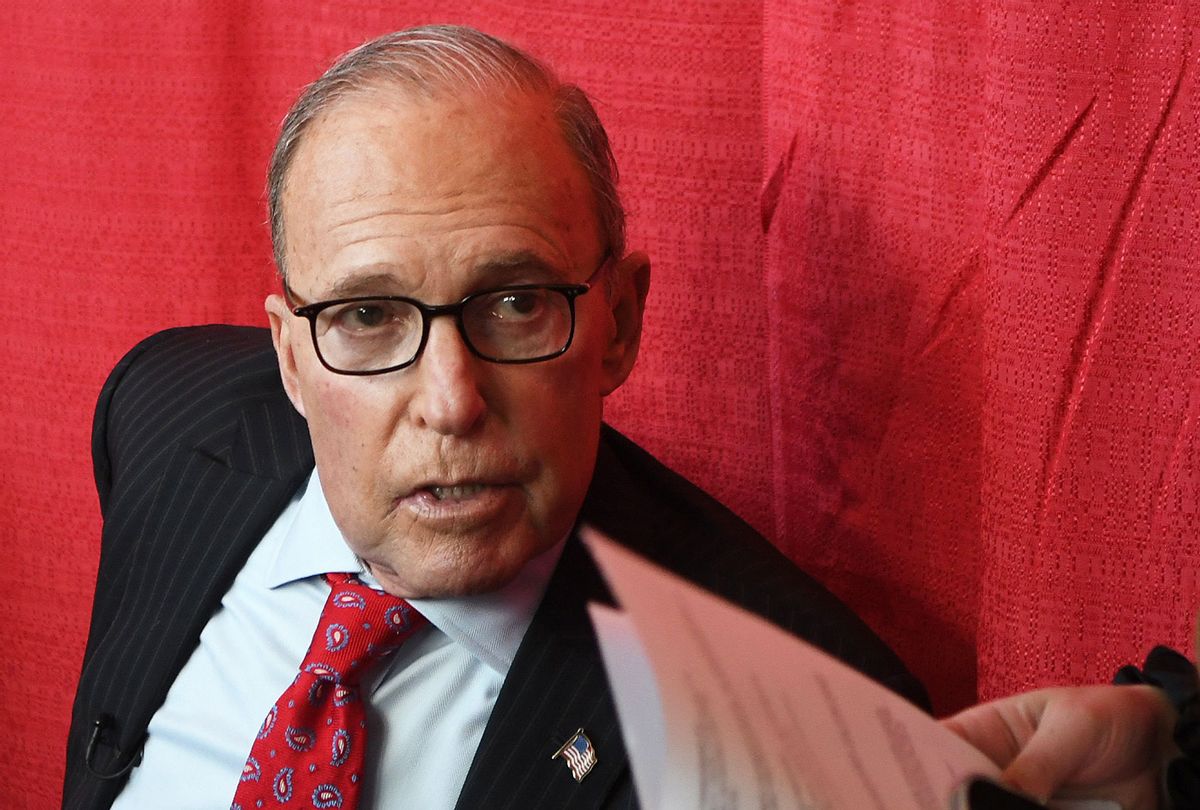 Fox Business Network host and former economic Trump adviser Larry Kudlow set off something of a right-wing smear campaign over the weekend when he went on a tirade against President Joe Biden's nonexistent plan to force "plant-based beer" upon the American public, calling Biden an "ideological zealot" intent on scrapping America's most cherished tradition of meat-eating.

In an interview on Thursday, Kudlow erroneously attacked Biden for putting forth a climate plan that calls for the elimination of meat, eggs, and dairy from the American diet. "There's a study coming out of the University of Michigan which says that to meet the Biden Green New Deal targets, America has to…stop eating poultry and fish, seafood, eggs, dairy, and animal-based fats," he started. "Ok, got that? No burger on July 4. No steaks on the barbecue. I'm sure Middle America is just going to love that. Can you grill those Brussels sprouts?"

"You can throw back a plant-based beer with your grilled Brussels sprouts and wave your American flag. Call it July 4th Green. Now, I'm making fun of this because I intend to make fun of it. This kind of thing is stupid. It comes from a bunch of ideological zealots who don't care one whit about America's well-being. Not one whit."

It should be noted that beer, generally made from water, grain, hops, and yeast, and barley malt, is already, in fact, plant-based. Furthermore, nothing in President Biden's plan so far calls for a prohibition on meat consumption. The original culprit of this misinformation, a Thursday Daily Mail article headlined "How Biden's climate plan could limit you to eat just one burger a MONTH," speculated that Biden intends on "cutting red meat consumption by 90% and animal products by 50%."

The article, quickly feasted upon by Kudlow and amplified by Fox Business News without the slightest fact-check, was then picked up by Republicans in government, including Texas GOP Gov. Greg Abbott, Rep. Lauren Boebert, R-Colo., and Rep. Marjorie Taylor Greene, R-Ga., who spread the lies to their voting bases.

"Joe Biden's climate plan includes cutting 90% of red meat from our diets by 2030. They want to limit us to about four pounds a year," tweeted Boebert. "Why doesn't Joe stay out of my kitchen?"

"Not gonna happen in Texas!" Gov. Abbott tweeted, with a screenshot of Kudlow's broadcast.

Greene, posting a picture of Biden eating a hamburger with others a table, echoed: "The Hamburglar. No burgers for thee, but just for me."

The misinformation also came into the good graces of Donald Trump Jr., who declared most proudly, "I'm pretty sure I ate 4 pounds of red meat yesterday. That's going to be a hard NO from me."

"If you read what Kudlow actually said,'' Krugman argued on Twitter, "he's cagey — doesn't say that Biden proposed this, only that some people say this is what would happen. But Fox viewers won't notice, which is the intention. This is what right-wing politics is down to. It's all false claims about evil liberals, which the base is expected to believe because it's primed to believe in liberal villainy. They're not even trying to engage on actual issues."

The White House has thus far released scant information about any formal plan to address emissions. According to the Washington Post, on Thursday, the President made vague remarks about investing in "American infrastructure and American innovation" in order to build "a critical infrastructure to produce and deploy clean technology."

The right's outrage was widely mocked online by the left, who were quick to point out that Biden's apparent political aversion to meat has no factual or historical basis at all. On Sunday, Senate Majority Leader Chuck Schumer, D-N.Y., took a jab at his conservative colleagues . "Excited to be watching the Oscars with an ice cold plant-based beer," he tweeted, with a picture of himself holding a beer while watching the Oscars. "Thanks Joe Biden."