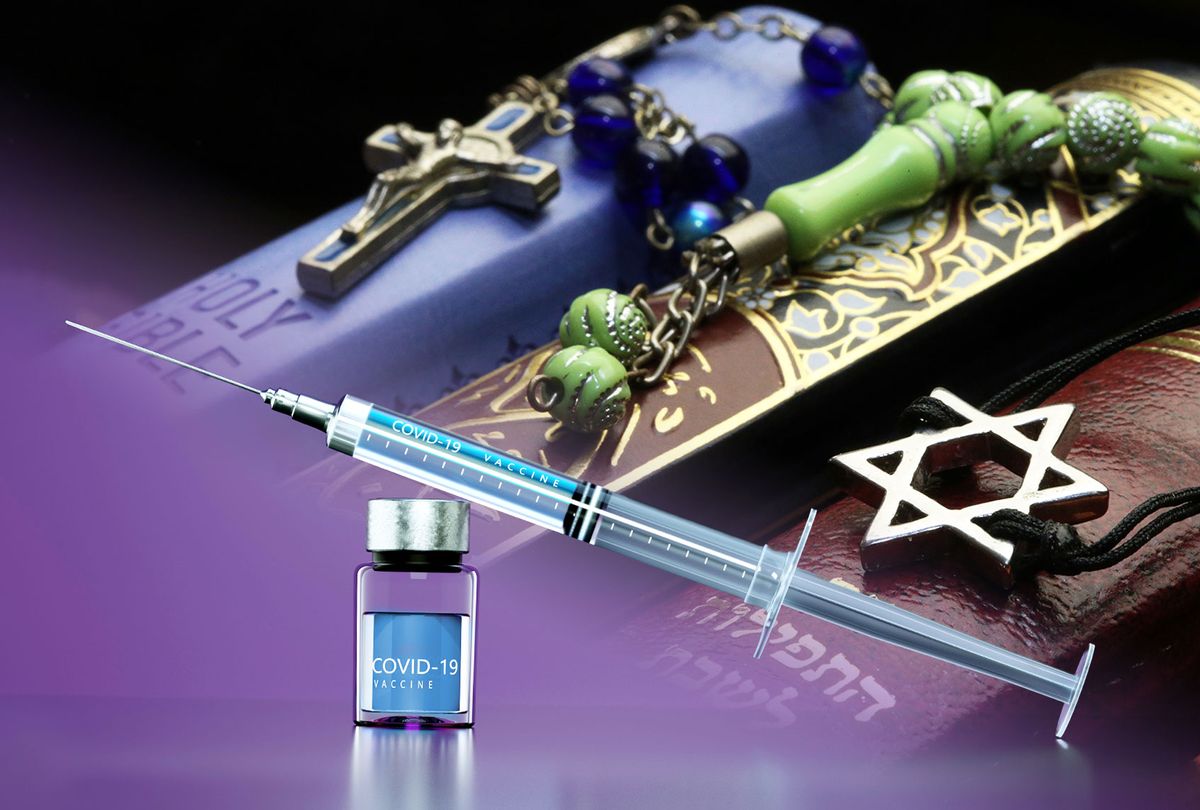 A nonpartisan and nonprofit organization that focuses on studying intersections between religion and politics released a survey on Thursday that is both hopeful and troubling: While millions of Americans remain hesitant to get a COVID-19 vaccine, religious leaders could actually help convince many people to do the safe and right thing.

By contrast, Jewish Americans are by far the most likely to support vaccinations, with 85% being either vaccine accepters, having already received a vaccine or saying they plan on getting vaccinated soon. There are also a majority of vaccine acceptors among white Catholics, other Christians, white mainline protestants, other non-Christian religious Americans, religiously unaffiliated Americans and Hispanic Catholics. The study also found, not surprisingly, that Republicans are less likely than Democrats and independents to be vaccine accepters, with the numbers being more extreme as a given Republican's media outlets skew farther and farther to the right. While only 45% of Republicans are vaccine acceptors (compared to 73% of Democrats and 58% of independents), that number becomes a majority among those who trust mainstream news or Fox News. It drops to less than one-third among those who trust far right outlets like Newsmax or One America News, or don't trust any television news.

"The current picture we have is a complex one," Robert Jones, the CEO and founder of PRRI, told Salon. "If I just take two groups, you can see the differences. For example, among African-American Protestants — one group that that is more hesitant than the general population — we find there that clergy seem to be playing a positive role and moving congregants to being more likely to be vaccine accepting. Among African-American Protestants who attend services regularly, six in ten are vaccine acceptors, but among those who seldom or never attend, it's only about four in ten. So we see there a positive role that black clergy are playing in their churches."

He added, "We see the opposite thing among white evangelical churches. Among those who attend regularly, only 43% say they are vaccine acceptors and for those who never attend, it's actually a 48%. It's actually a little bit higher."

These numbers reflect broader national trends. The PRRI survey found that 26% of all Americans who are hesitant to get a COVID-19 vaccine, and 8% of those who are resistant to getting one, say that at least one of six faith-based pro-vaccine approaches could change their mind on the subject. That number increased among Americans who attend religious services at least a few times each year, with 44% of the vaccine hesitant and 14% of those who are resistant saying they could be persuaded through faith-based approaches.

Scientists and other public health experts have long been concerned about the possibility that not enough Americans will get vaccinated. Dr. Georges Benjamin, executive director of the American Public Health Association, told Salon in December that experts hope that somewhere between 70% and 75% of the population getting vaccinated will be enough to achieve herd immunity. Dr. Russell Medford, Chairman of the Center for Global Health Innovation and Global Health Crisis Coordination Center, explained to Salon at that time that "Americans should expect, with 95% certainty, to be personally protected from developing any symptoms or complications from COVID-19 after receiving both doses of either the Moderna or Pfizer vaccines."

He added that "the current rapid rise in infection, hospitalizations and death will not be immediately impacted by the roll-out of the vaccine alone but the faster that Americans are vaccinated, combined with rigorous mask wearing and social distancing, the greater and more rapid that impact."

According to a recent Quinnipiac University poll, 68% of Americans either plan to or have already been vaccinated while 27% do not plan on getting vaccinated. As Jones told Salon, America has already utilized its best scientific, manufacturing and logistical resources to produce working vaccines and distribute them throughout the country.

"We're at a point where we need to marshal the best of our cultural resources," Jones told Salon. "That includes the media. It includes religious and political leaders that are really about making appeals so that people feel safe, that they feel like it is either an act of solidarity or it's put in religious terms as an act of loving their neighbors, to participate and get vaccinated so that we reach herd immunity. We're at this point where it really is going to be the cultural resources that are going to carry us over the finish line. Religious appeals can be part of that."