As big corporations strike a pose for racial justice, they keep on funding the police

Corporations like AT&T, Target and Starbucks have embraced racial-justice rhetoric, while funneling money to police 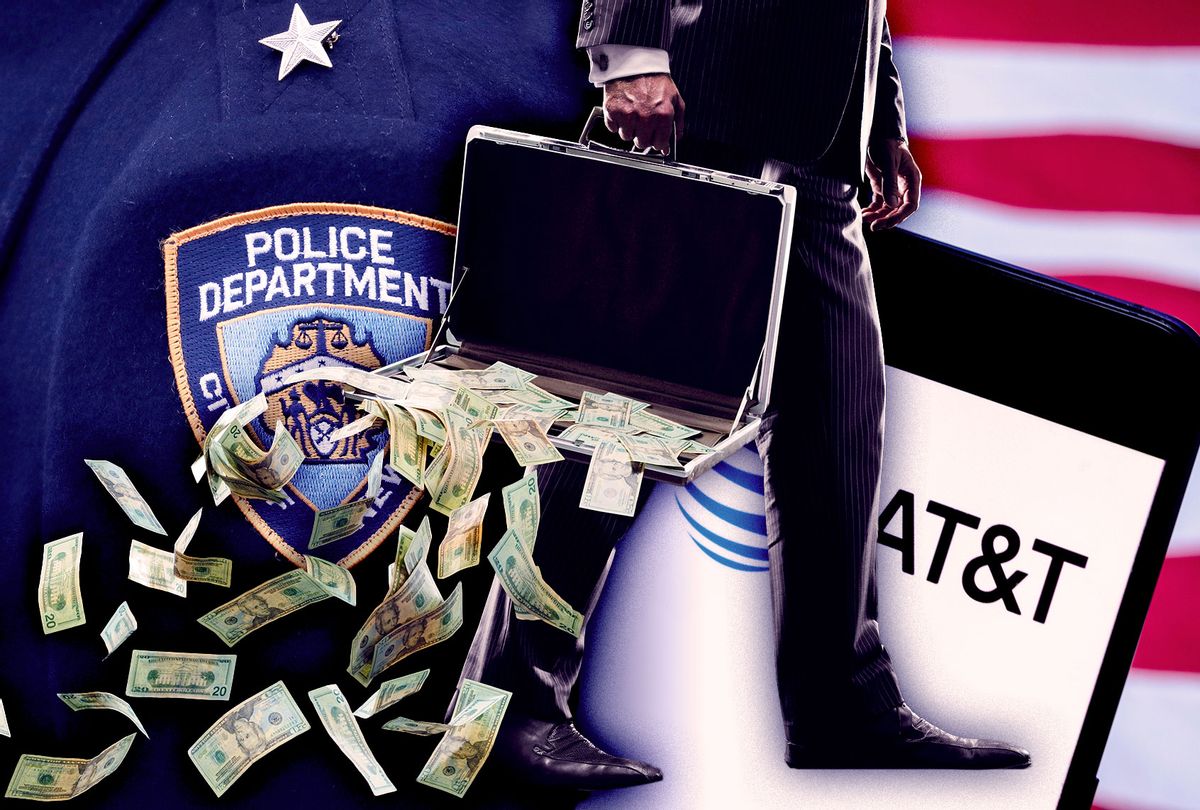 As protests for racial justice erupted around the globe last summer following the killing of George Floyd at the hands of former Minnesota police officer Derek Chauvin, many activists called upon corporate America to step up and fight for racial equality in the workplace and beyond, bringing to light a long history of discrimination toward workers of color. The push prompted a series of sweeping apologies and broad action plans, shifting the goalposts for what would be expected of corporations in their relatively new status as "corporate citizens."

Nearly a year later, many major corporations have assumed a similar posture following Chauvin's conviction on murder charges, reminding the American public of their purported commitment to diversity, equity and inclusion. Amid mounting evidence that many police departments routinely display both implicit bias and outright racism, reports show that corporate America continues to pour millions of dollars into the police. If "defund the police" was always more an activist slogan than a reality, in effect the opposite seems to be occurring.

One way corporations funnel money into law enforcement is through police foundations. As nonprofits, police foundations allow police departments to raise unregulated slush funds from undisclosed sources, generally meaning corporations or private foundations associated with wealthy families or individuals. Police have historically used this money to expense  weaponry and special equipment that is not covered by their municipal budgets.

"Police foundations are really good at hiding what they're actually spending their money on," Arisha Hatch, vice president of Color of Change, told Salon. "These foundations exist completely off the books."

According to Nonprofit Quarterly, there are about 251 police foundations across the U.S. A report last year by the government watchdog LittleSis found that a whole host of well-known corporations have been intimately involved with police foundations throughout the nation.

One notable example is AT&T. Last year, Sludge found that AT&T was "an active donor" to the Seattle Police Foundation, which according to IRS filings amassed more than $1.5 million in contributions and grants in 2019 alone. Gothamist reported in 2019 that AT&T made an appearance as a "deep-pocketed donor" at the New York City Police Foundation, which collected $9.2 million in contributions and grants over the fiscal year ending in June 2019. Because these foundations are not subject to typical IRS disclosure laws, neither of them reported how that money were spent.

AT&T is also a "Platinum Partner" of the National Sheriffs' Association, a pro-police lobbying group that fights to preserve the 1033 Military Surplus Program, a government-run initiative that distributes surplus military-grade weaponry and supplies to police departments throughout the nation. In order to become a Platinum Partner, a corporation must donate at least $15,000.

Kevin Walby, an associate professor in the Department of Criminal Justice at the University of Winnipeg, told Salon that any company that makes strong rhetorical commitments to racial equality should not donate to police foundations at all, saying that in doing so, "they are actually backstopping very racist policing practices."

Target is another corporate giant with deep ties to the police. On Tuesday, Target CEO Brian Cornell postponed a speaking event in anticipation of Chauvin's verdict, later telling his employees in an internal memo: "The murder of George Floyd last Memorial Day felt like a turning point for our country. The solidarity and stand against racism since then have been unlike anything I've experienced. Like outraged people everywhere, I had an overwhelming hope that today's verdict would provide real accountability. Anything short of that would have shaken my faith that our country had truly turned a corner."

One might assume such concern for racial justice would translate to the company's spending habits. However, according to government watchdog LittleSis and Sludge, the Minnesota-based retail giant has donated to at least nine police foundations since 2015, including those in Atlanta, New York and Los Angeles. Back in 2014, Target quietly donated $200,000 to the Los Angeles Police Foundation so that its affiliate department could gain early access to surveillance software engineered by Palantir, a company accused of whitewashing systemic racism with its supposed data-driven solutions to policing. Target has also supplied thousands of dollars in grant money to various law enforcement agencies throughout the country. The company reported that by 2011, it had given "Public Safety Grants" to over 4,000 law enforcement agencies. In that same year alone, Target said it had distributed more than $3 million in grants to "law enforcement and emergency management organizations."

A Target spokesperson declined to provide more recent figures on grant money. The company also declined to clarify whether its relationships with police foundations remain active, instead providing the following statement: "We also believe that team members and guests should feel safe in their engagements with law enforcement. We support holistic changes in policing that advance more equitable, community-centric policing that is grounded in innovative law enforcement reform best practices."

Numerous tech giants, including Amazon, Google, Facebook and Microsoft, also support the police in ways outlined above. Amazon, for example, which claimed to "stand with [its] Black employees, customers, and partners" following Chauvin's verdict, has supported the police in a variety of different ways. In 2019, the tech giant reportedly donated up to $9,999 to the Seattle Police Foundation. A company representative told Salon that the company has not donated to the Seattle Police Foundation within the last two years. Salon was unable this, since the foundation reportedly scrubbed all information pertaining to its corporate sponsors shortly after LittleSis released its report.

Additionally, Amazon board member Indra Nooyi serves as a trustee on the board of the New York City Police Foundation, according to digitally archived information on the foundation's website from last year.

Meanwhile, AmazonSmile, the company's charity initiative — which allows Amazon to donate 0.5% of proceeds from a sale to the buyer's chosen charity — has helped pass along donations from customers to numerous police foundations, including those in Chicago, Los Angeles, Seattle and Cleveland. (This relationship has been publicly advertised via Twitter.)

A company representative said that Amazon defers to guidance from the U.S. Office of Foreign Assets Control and the Southern Poverty Law Center on what organizations meet AmazonSmile's eligibility requirements. These requirements state that eligible organizations cannot "engage in, support, encourage, or promote … intolerance, discrimination or discriminatory practices based on race." Just this year, however, the SPLC published a feature calling racial bias in policing a "national security threat."

Coffeehouse giant Starbucks has visibly attempted to go above and beyond in demonstrating its commitment to racial justice. Last year, at the height of the racial unrest following George Floyd's death, the coffee chain said it would distribute 250,000 shirts bearing the "Black Lives Matter" slogan to employees, flouting its existing ban on any apparel that "advocate for a political, religious or personal issue," according to the Wall Street Journal. Just this year, Starbucks invested $100 million in "small business growth and community development projects in BIPOC neighborhoods."

Following the Chauvin verdict, Starbucks the company released a statement from CEO Kevin Johnson, which read in part:

Today's jury verdict in the murder trial of ex-police officer Derek Chauvin will not soothe the intense grief, fatigue and frustration so many of our Black and African American partners are feeling. Let me say clearly to you: We see you. We hear you. And you are not alone. Your Starbucks family hurts with you ... We will be here for our partners in the Twin Cities and for each and every BIPOC Starbucks partner as we try to understand the systemic wrongs that lead to inequality.

One might argue these "systemic wrongs" have been exhibited by the Seattle Police Department. In a 2019 "Use of Force" report released by the Seattle Police, the department revealed that it used force against Black residents at a disproportionately higher rate than white residents. According to the report, more than 31 percent of cases of police force used against males involved Black males, even though they make up around 7 percent of the city's population. A subsequent "Disparity Review" that year found that residents of color were frisked at higher rates than white residents, even though white people were statistically more likely to be carrying a weapon, and that Seattle officers drew their guns in encounters with residents of color at a higher rate than with white residents.

In that same year, Starbucks donated two grants totaling $15,000 to promote "implicit bias training" within the Seattle police and help the department host its "2019 banquet gala," a spokesperson told Salon. The company also "contributed $25,000 to the New York City Police Foundation to help provide protective equipment such as masks, gloves and hand sanitizer, and coordinated the delivery of meals to precincts." The representative did not say whether there were any accountability mechanisms in place to ensure the money was used appropriately, but did note that the company does "not currently have any funding with the Seattle Police Foundation."

When corporations like Target and Starbucks give money to police foundations, it not only presents an ideological contradiction; it also presents a conflict of interest within the department itself, noted Walby, of the University of Winnipeg. "We only hear about donations" to police "when corporations want to celebrate them," he said. "They want that halo effect. However, there are lots of instances in which the transfers and purchases aren't made public. It's an even bigger problem if they're spending it on something that pertains to the corporation."

In 2014, for instance, the Los Angeles Daily News reported that the Los Angeles Police Foundation received $84,000 in donations from stun-gun maker TASER International (now known as Axon) prior to TASER's contract with the LAPD. In another case, Motorola, a donor to the New York Police Foundation, was later awarded several NYPD contracts, as reported by Politico in 2017. "There's a real potential for private influence in public policing through police foundations," Walby said. "It's appropriate to call this money dark money. Because we can't really see this money going in. We can't really see this money going out."

As the negative impact of police violence and criminalization becomes increasingly apparent in communities of color, Walby and Hatch argued, continuing to donate to police undermines corporations' claims to awakened social consciousness. "Police departments across this country have plenty of money," Hatch said. "They are well-resourced in a way that undermines other programs that could lead to safer and healthier communities."

"Any money for police reform just enhances the power base of police as an institution," Walby said. "The institution can't change conduct that is institutionalized. The funds should be given directly to community and social development groups, groups that actually have a chance of creating something like equality in our world."