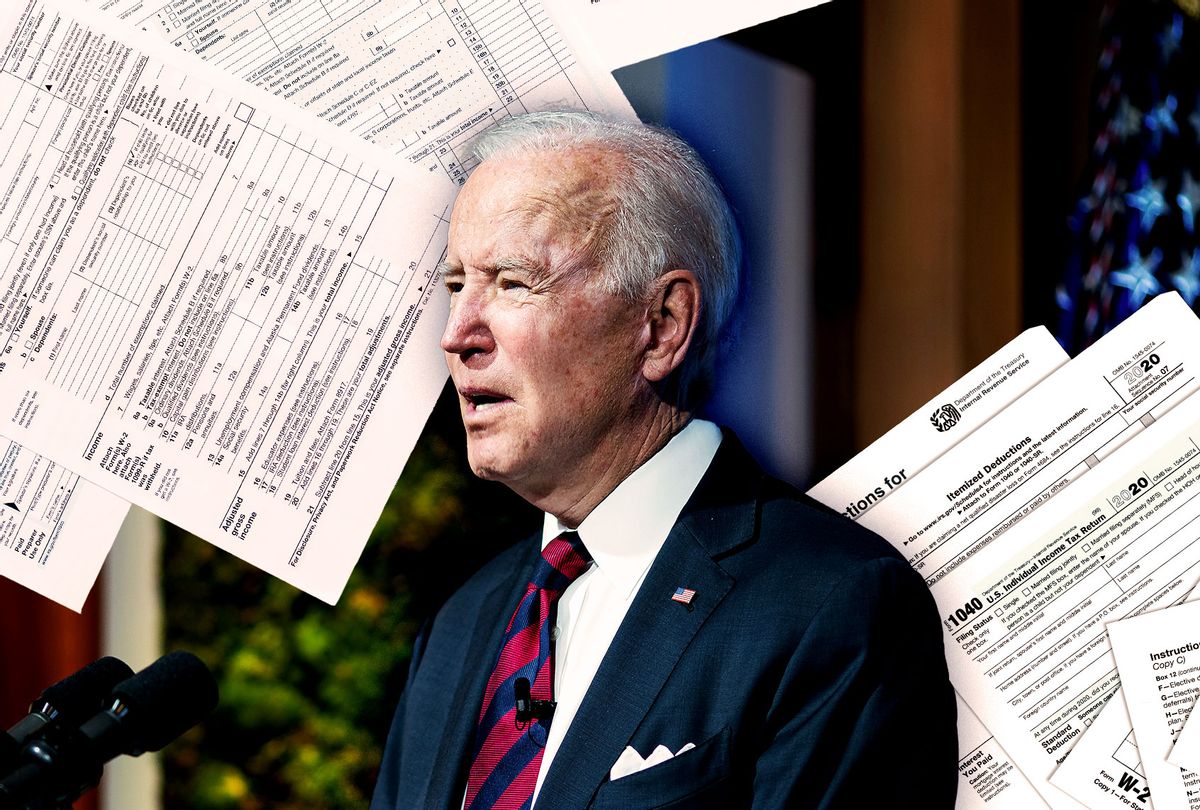 President Biden is expected to propose pumping an added $80 billion into the Internal Revenue Service over the next 10 years to enhance the agency's audits of high-earning individuals, a move designed to crack down on tax evasion and fraud by the wealthiest Americans.

According to a New York Times report published Tuesday, the proposal will apply new disclosure laws to high net-worth individuals who own businesses, as well as to large organizations that are not technically registered as corporations. Biden administration officials estimate that the extra funding to the IRS could yield a whopping $780 billion or more in new tax revenue over the next decade, although the Congressional Budget Office has cast doubt on that number.

An $80 billion increase in funds to the IRS would amount to "an increase of two-thirds over the agency's entire funding levels for the past decade," the Times reports. The proposal would come just after the president's announcement of the IRS's $1.2 billion annual budget, a 10 percent increase over last year.

The IRS proposal is part of Biden's larger plan to finance his American Families Plan, which Biden will reportedly unveil in his speech before a joint session of Congress on Wednesday. The bill, a legislative companion to his American Jobs Plan, is expected to deliver relief for child care-givers, $500 billion in tax credits, free community college education, paid family and medical leave and an extension of the subsidies doled out by the Affordable Care Act. Officials have yet to release concrete details, however.

According to CNN, additional funding for the American Families Plan will come from tax hike that raises the top marginal income tax rate from 37 percent to 39.6 percent, a return to the top tax rate prior to the Trump administration's cuts in 2017. The capital gains tax rate will also be raised for Americans making over $1 million a year, from 20 percent to 39.6 percent, which after accounting for the Affordable Care Act surtax, amounts to about 43 percent. Finally, the corporate tax rate is expected to be increased from 21 percent to 28 percent, still significantly below the pre-2017 level, when the rate was around 35 percent.

The American Families Plan is expected to come with a price tag of $1.5 trillion, the Times reports, and has garnered support from many economists and tax law experts.

"The plan is good news for honest filers and businesses, the budget, and the rule of law," Chye-Ching Huang, executive director of the Tax Law Center at NYU Law, told the Times. "Stopping tax cheats from having an unfair advantage helps honest businesses to compete and thrive."

"The plan is excellent in that it's comprehensive both on the funding side and on the information reporting side," Chuck Marr, senior director for federal tax policy at the Center on Budget and Policy Priorities, told the Wall Street Journal.

According to the Journal, experts have praised the American Families Plan for its effort to narrow the tax gap, which reflects the difference between the amount of taxes owed to the government and the amount of taxes actually paid by the American people. Thanks to dwindling IRS resources over the past decade after cuts to the agency's budget, the tax gap has precipitously widened all while, the Journal reports, audit rates have hit a 40-year low point. The IRS reported recently that it dedicates 30 percent less funds to enforcement and staff than it did over a decade ago. Earlier this month, IRS Commissioner Charles Rettig estimated that the tax gap may be close to $1 trillion.

On Monday, former Obama economic adviser Larry Summers, whose advice about the size of the second COVID relief package was rebuffed earlier this year, praised the President's expected plan. "This is the broadly right approach," he said in an email to the Times. "Deterioration in I.R.S. enforcement effort and information gathering is scandalous. The Biden plan would make the American tax system fairer, more efficient and, I'm confident, raise more revenue than official scorekeepers now forecast — likely a trillion over 10 years."