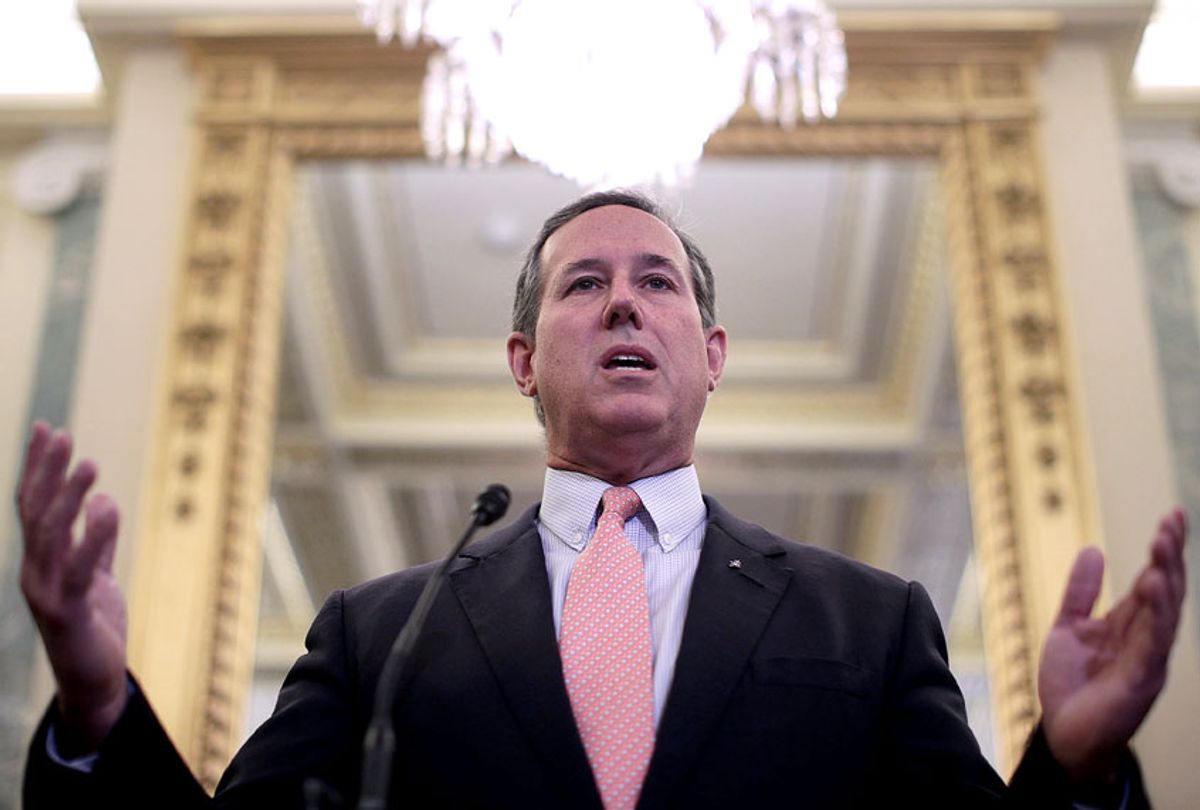 CNN commentator Rick Santorum, a onetime Republican senator from Pennsylvania and 2008 presidential candidate, is facing calls for his firing after seemingly erasing Native Americans from American history during a speech to a conservative student group last week.

Santorum argued that countries like Italy, Greece, China and Turkey evolved over time but claimed that Europeans seeking religious freedom built America from scratch — even though estimates suggest there were already millions of indigenous Americans living in what is now the United States before the arrival of European settlers.

"They came here, mostly from Europe, and they set up a country that was based on Judeo-Christian principles," Santorum said in a speech to the Young America's Foundation's Standing Up for Faith & Freedom conference, first flagged by Media Matters. "That's what our founding documents are based upon. It's in our DNA."

"We came here and created a blank slate. We birthed a nation from nothing," he continued. "I mean, there was nothing here. I mean, yes, we have Native Americans but candidly there isn't much Native American culture in American culture. It was born of the people who came here pursuing religious liberty to practice their faith, to live as they ought to live, and have the freedom to do so."

After his remarks were widely circulated on social media, Santorum said in a statement to Salon that "I had no intention of minimizing or in any way devaluing Native American culture."

"Yes, strange how when you commit a genocide against an existing people, their culture goes away," tweeted author John Scalzi.

Santorum's claim is also untrue. The U.S. representative democracy system "stems from a political system developed by the Iroquois Confederacy of Nations, founded in 1142," explained HuffPost's Jennifer Bendery. "Beyond that, all kinds of aspects of Native American culture ― sports, food, dance, art, languages, spiritual practices― are very much a part of American culture today, even if Santorum may not be aware of it."

"The word 'Minnesota' is literally from a Native American language," wrote reporter Tom Weber. "Every time you say the name of this state — and several others — you're speaking a Native language."

"Native & Indigenous nations lived, governed, and thrived here before their land was stolen and they were murdered in a mass genocide, you ignorant white supremacist," tweeted Rep. Mark Pocan, D-Wis.

"Scholars call this the 'pristine nature' or 'untouched wilderness' myth — the claim nothing was happening in America before colonization," wrote Gizmodo reporter Dell Cameron. "It was used to justify the extermination of indigenous people, policies that Adolf Hitler said he drew inspiration from in writings & speeches."

Many questioned why CNN still employs Santorum given his history of offensive statements. A spokesperson for the network did not immediately respond to a request for comment.

"Seriously is any one surprised to hear this hot garbage coming from Rick Santorum?!" tweeted Jaime Harrison, the chairman of the Democratic National Committee. "Nothing was here?! No native American culture in American culture?! America hasn't changed?! Ok @CNN ... ok!"

"If you are this ignorant about American history, then you probably shouldn't be a political commentator on @CNN," wrote former Obama aide Tommy Vietor.

"We both work for @CNN & that has never stopped me from calling him out," he said on Twitter. "I look forward to all my CNN colleagues who regularly have him on doing the same. This is no 'both sides' to this. Mainstream media doesn't have a Black version of this on air regularly. This is QKKK."