"As for forcing children to wear masks outside, that should be illegal," Carlson declared 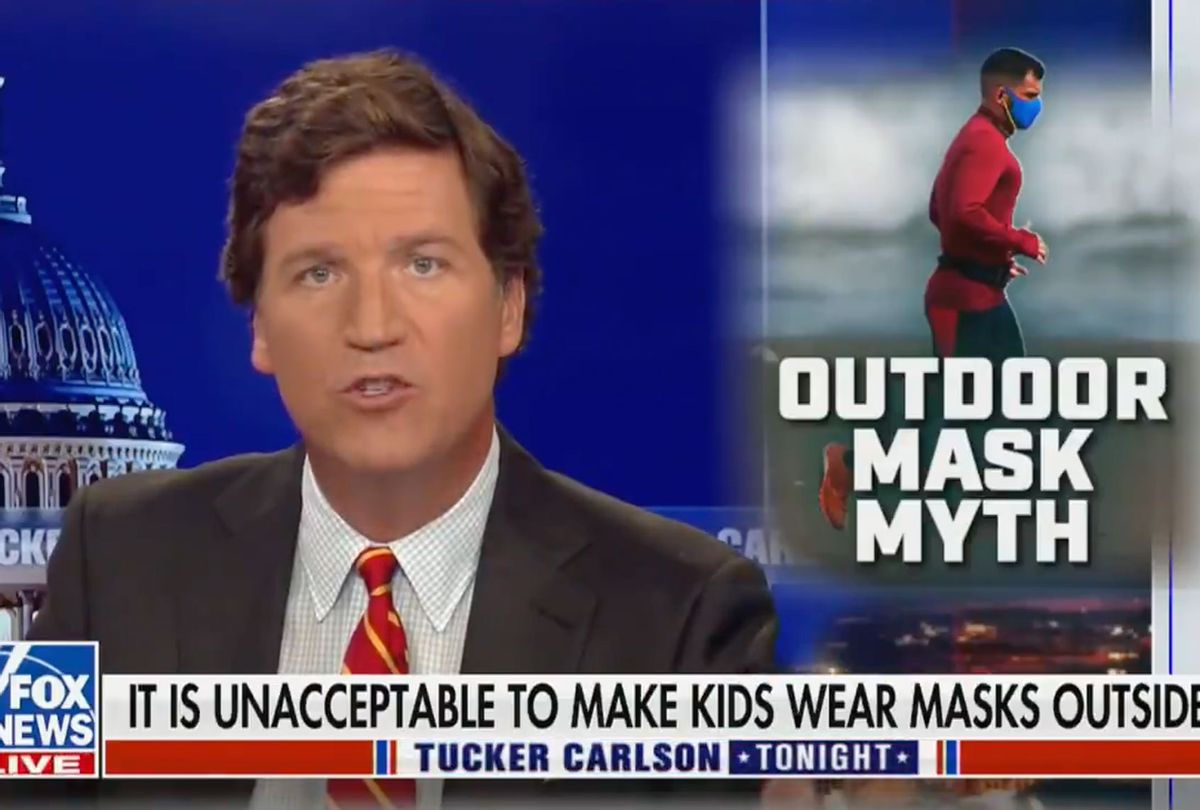 Fox News host Tucker Carlson dramatically escalated his incendiary anti-mask message with a Monday night diatribe directing his audience to call the police on people using the proper personal protective equipment while the nation still grapples with a pandemic.

"Call the police immediately," Carlson instructed his Fox News audience if they see a child wearing a mask outside.

"As for forcing children to wear masks outside, that should be illegal. Your response when you see children wearing masks as they play should be no different from your response to seeing someone beat a kid in Walmart. Call the police immediately, contact child protective services. Keep calling until someone arrives," Carlson declared. "What you're looking at is abuse, it's child abuse, and you are morally obligated to attempt to prevent it."

"If it's your own children being abused, then act accordingly," Carlson continued on his anti-mask tirade.

"Let's say your kid's school emailed you and announced that every day after lunch, your sixth-grader was going to get punched in the face by a teacher. How would you respond to that? That's precisely how you should respond when they tell you that your kids have to wear masks on the soccer field. That is unacceptable, it is dangerous, and we should act like it because it is. But too few of us have responded like that; we have been shamefully passive in the face of all of this."

Carlson further compared vaccinated people wearing masks outside, during his opening monologue, to that of "watching a grown man expose himself in public."

"The only people who wear masks outside are zealots and neurotics," Carlson began before calling on his older viewers to take up the fight themselves and tell others outside to take off their masks.

Tucker Carlson is now telling his audience to harass people who wear face masks outside.

If they see children wearing masks, Tucker says the response should be no different than when you see a kid being abused -- "call the police immediately, contact child protective services" pic.twitter.com/4svVH0JY3s

But on Carlson's Monday night program, the remarks on masks didn't stop there. When right-wing pundit Matt Walsh joined in on the mask bashing, things took a weird turn after Walsh claimed: "people are afraid to breathe air."

"I was in Austin a few days ago, and I'm walking outside without a mask on, and people are staring at me like I'm the crazy one for not having a mask on. Meanwhile, if you're walking outside with a mask on, I should be looking at you, and I do look at you like I would look at a grown man hugging a teddy bear and having a pacifier in his mouth while he's walking down the street. This is your security blanket," Walsh told Carlson. "There's no reason for you to have it on. You're just afraid. You're afraid of fresh air...People are afraid to breathe air, and we're making it so that kids are afraid of air too, and that's insane to me."

Tucker Carlson says wearing a mask outside is equivalent to "watching a grown man expose himself in public" pic.twitter.com/tPRt2Q3tDg

Carlson then shared that he agreed and added: "I would even actually up that and say a vaccinated person, someone with the antibodies wearing a mask outside is like watching a grown man expose himself in public. 'That's disgusting; put it away, please. We don't do that here.'"

While many conservative and right-wing firebrands voiced support for Carlson, right-wing radio host Erick Erickson tweeted in response, "Conservatives don't get in other people's faces and tell them how to raise their kids." As for many of the usual conservative firebrand suspects, they jumped at the opportunity to defend Carlson, including Rep. Marjorie Taylor Greene, who equated mask-mandates to that of being "hateful."