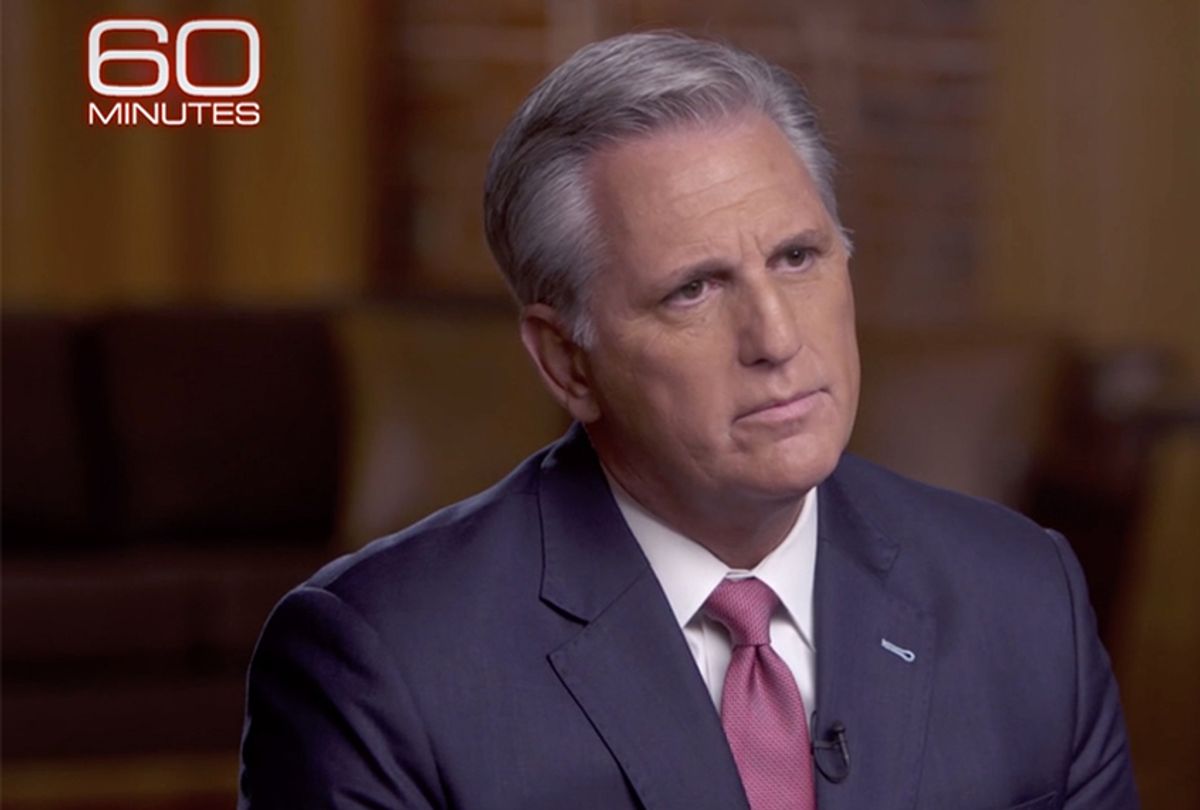 Kevin McCarthy just can't help himself. While Republicans have long been known to spread debunked lies to their constituents, including but not limited to Trump's Big Lie and baselessly claiming that wearing masks inside cause cancer, the California Republican and leader of Republicans in the House of Representatives just can't seem to give up the right-wing's widely debunked smear about burgers.

Appearing on Fox News with Sean Hannity on Wednesday, McCarthy reacted to President Joe Biden's first joint speech to Congress by falsely claiming that "he's going to control how much meat you eat."

It should comes as little surprise that this is a falsehood promoted by Fox News. It began on a Fox Business Network segment on Biden's supposed plans to create strict beef rations on Americans, which has since been debunked by fact-checkers. Former Trump adviser Larry Kudlow set off the chain of lies when he attacked Biden for establishing a climate plan that will ban meat, eggs, and dairy from the American diet.

"There will be no burgers on Fourth of July, no steaks on the barbecue," said Kudlow.

"Americans would have to cut red meat consumption by a whopping 90%. That means only one burger a month," said another Fox host.

"There's a study coming out of the University of Michigan which says that to meet the Biden Green New Deal targets, America has to…stop eating poultry and fish, seafood, eggs, dairy, and animal-based fats," a Fox host claimed this week. "Ok, got that? No burger on July 4. No steaks on the barbecue. I'm sure Middle America is just going to love that. Can you grill those Brussels sprouts?"

Biden's climate plans don't include any restrictions on red meat consumption and he didn't even mention red meat when he announced his plan to reduce U.S. greenhouse gas emissions by 50% by 2030.

Fox News host John Roberts has since retracted his lies about the burger myth.

"On Friday, we told you about a study from the University of Michigan to give some perspective on President Biden's ambitious climate change goals," he said on Monday's segment of America Reports. "That research, from 2020, found that cutting back how much red meat people eat would have a drastic impact on harmful greenhouse gas emissions."

He continued: "The data was accurate but a graphic and the script incorrectly implied that it was part of Biden's plan for dealing with climate change. That is not the case."

McCarthy has yet to retract his false statement