Florida and Texas join the Republican war on voting 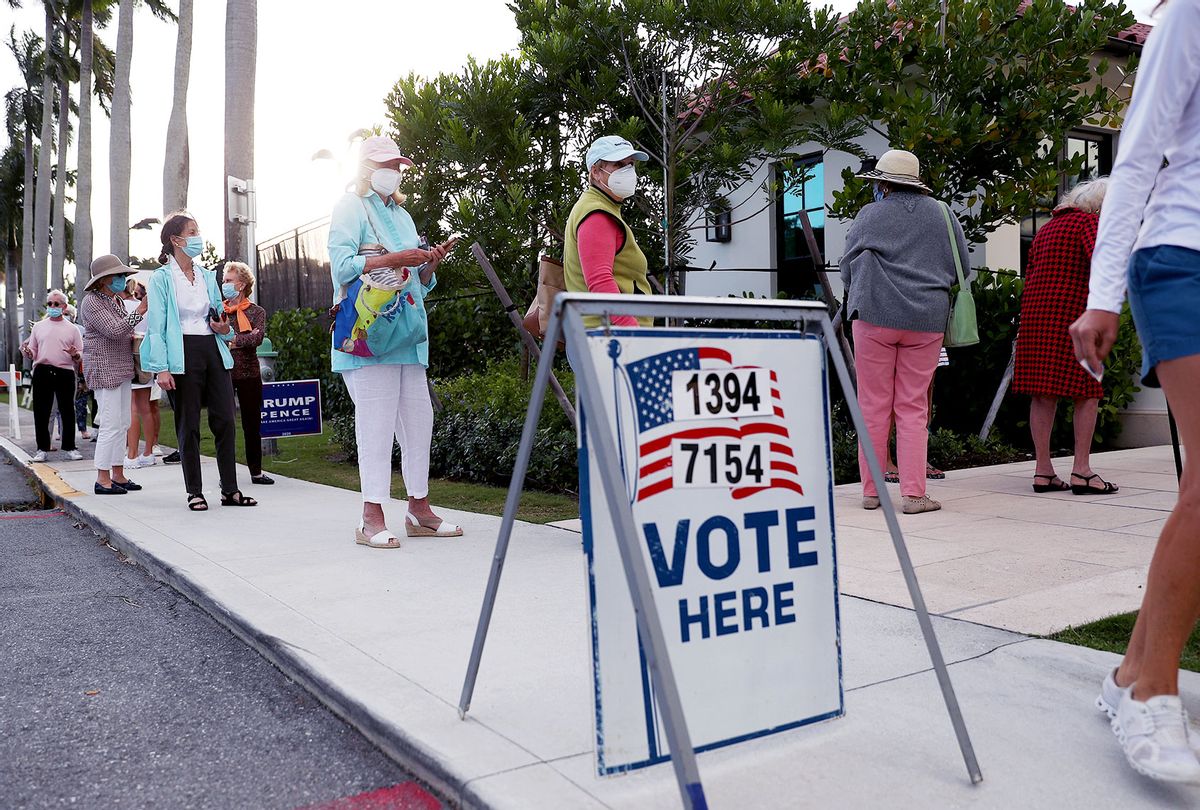 People stand in line to vote at the Morton and Barbara Mandel Recreation Center on November 03, 2020 in Palm Beach, Florida. After a record-breaking early voting turnout, Americans head to the polls on the last day to cast their vote for incumbent U.S. President Donald Trump or Democratic nominee Joe Biden in the 2020 presidential election. (Joe Raedle/Getty Images)
--

Both Florida and Texas joined the Republican-led, state-level crusade against voting rights this week, dealing two definitive blows to minority voters for many elections to come.

Following days of acrimonious debate, the Republican-majority Florida state legislature approved a series of voter restrictions on Thursday that will make it significantly harder to vote for millions of Sunshine State residents. The bill, Senate Bill 90, which resembles the restrictive voting measures passed in Georgia and Michigan, is expected to have a disproportionate impact on minorities in the state, who suffered from one of the most severe cases of voter suppression in the 2020 election.

According to the Miami Herald, the bill limits drop box usage to early voting hours, requires that an elections office employee monitor them, and prohibits drop boxes from changing locations within 30 days of Election Day. Furthermore, the bill will shorten the amount of the time Floridians have to request a ballot. Voters will only be able to request ballots for the upcoming general election rather than the next two general elections, a move critics expect to confuse many voters and lead to non-participation.

On Thursday, GOP Florida Gov. Ron DeSantis, one of the bill's biggest cheerleaders, announced that he will "for sure" sign the bill, according to CNN. "We've had voter ID. It works. It's the right thing to do," DeSantis said, adding that the state's 2020 election was "fair and transparent, and the reforms we have coming will make it even better."

On Friday, Hillsborough County Supervisor of Elections Craig Latimer, expressed strong doubt over whether the bill's provisions are needed, calling the measure an "unnecessary call for election reform." He continued: "In 2020 our voters overwhelmingly appreciated the peace of mind that came from dropping their mail ballot off in a secure drop box, because they knew that by using the drop box instead of a mailbox, their ballot would be received on time."

"We should be looking for cost-effective ways to expand their use, including the use of secure 24-hour drop boxes with camera surveillance," Latimer added. "Instead, the new legislation prohibits that."

A Florida state Democrat, Rep. Omari Hardy, went further, calling the bill "the revival of Jim Crow in this state, whether the sponsors admit it or not."

Despite their failure to provide any evidence that Florida's election system was faulty in 2020, state Republicans have maintained that the bill is nonetheless needed to prevent fraud.

"I believe that every legal vote should count," said Sen. Travis Hutson, a Republican state lawmaker from Northeast Florida. "I believe one fraudulent vote is one too many. And I'm trying to protect the sanctity of our elections."

"This is an incremental legislative approach to address these issues, similar to what we had to do to get the timeliness problem solved, to get the efficiency problem solved," echoed GOP state Rep. Wyman Duggan, a member of Florida's House Public Integrity & Elections Committee. "We are now focusing on making sure that every vote is a valid vote."

A similar effort was mounted in the Lone Star state on Thursday when the Republican-majority Texas state Senate passed its own restrictive voting bill. After a slight misfire regarding the bill's specific language, Texas Senate Bill 7 (SB 7) is set to be voted on in the House. Last month, Texas House proposed its own restrictive voting bill – House Bill 6 (HB 6). It remains unclear which bill, if not both, will make it to the governor's desk.

According to the Texas Tribune, SB 7 restricts early voting hours, limits the ways in which voters can receive ballot applications to vote by mail, and adds more oversight over the distribution of polling places in urban counties. SB 7 also appears to outlaw drive-thru voting, prohibiting polling places from using a "tent or other temporary movable structure or a parking garage, parking lot, or similar facility designed primarily for motor vehicles."

Although the Texas Tribune noted that "SB 7 is a duplicate version of HB 6," several lawmakers disagree. Rep. Jessica González, a Dallas Democrat said that "these two bills are substantially different," calling for a public hearing on the matter.

On Thursday, Texas Democrats penned a missive to U.S. Attorney General Merrick Garland, alleging to the Justice Department that the Republican-backed coalition to advance SB 7 without a rewrite would be a "grave deviation from standard operating procedure."

"Texas has a long history of disenfranchising people of color, and if the leadership of the governing majority has it their way, that history will surely continue," their letter stated. "We have seen recent, coordinated attempts to pass disenfranchising legislation in states across the South, like Georgia, North Carolina, and Arizona. We ask that you review the facts, and if it is deemed appropriate, that the Civil Rights Division monitor the proceedings of the House Elections Committee and the Texas House for the remainder of session."

The bills come as part of a larger GOP state-level push for new voter restrictions over unsubstantiated fears that the 2020 general election was riddled with fraud. Earlier this month, Salon reported that 361 restrictive voting bills had been proposed in 47 states throughout the nation.