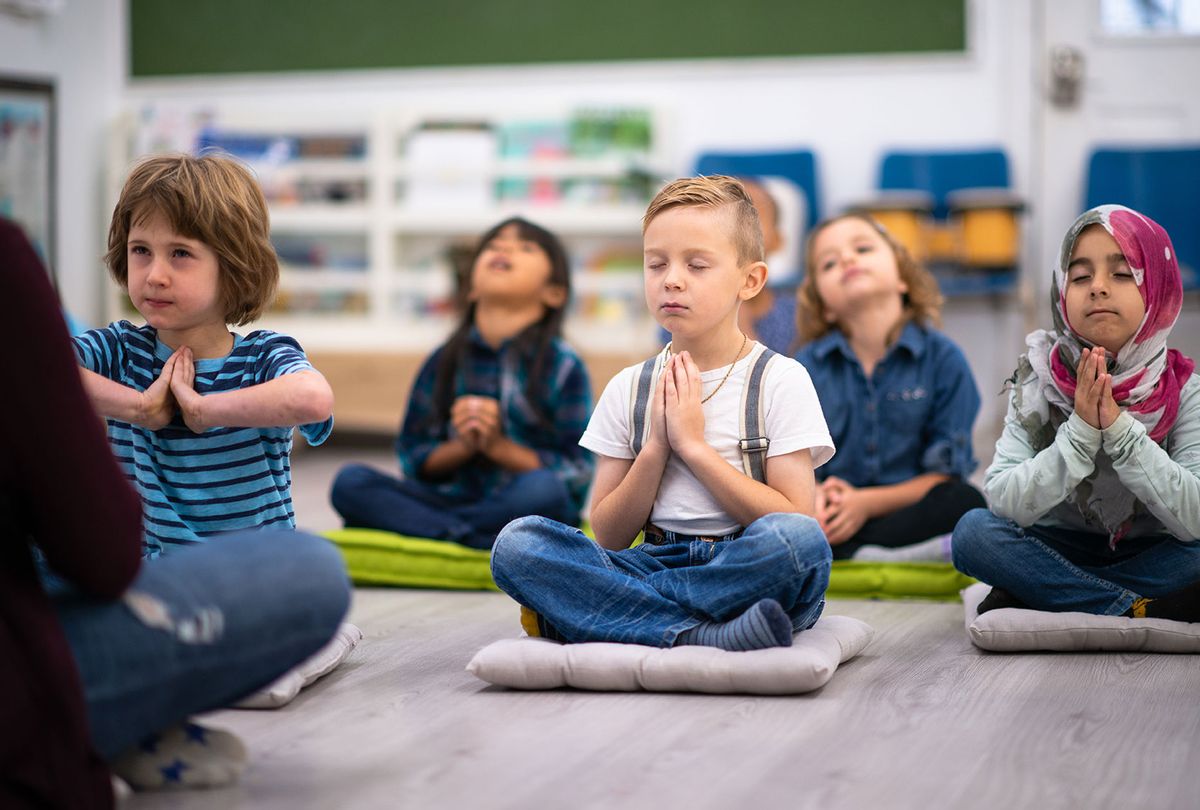 In early 2019, a high school student asked Alabama state Rep. Jeremy Gray about his daily routine during a talk he was giving at a public high school in his district. The 35-year-old former Division I football player and CFL star said it often includes yoga — at least twice a week.

"As football players and athletes, we do yoga as a way to recover," Gray told Salon.

But his admission also unveiled a surprising truth about the state of Alabama: yoga is banned in public schools. The high schoolers he stood in front of were legally prohibited from having the activity be part of their public school curriculum. The ban, which has been in effect since 1993 and was voted on by the Alabama Board of Education, states: "School personnel shall be prohibited from using any techniques that involve the induction of hypnotic states, guided imagery, meditation or yoga."

When Gray, a Democrat from Opelika, learned about the seemingly antiquated ban, he set out to overturn it — introducing Alabama House Bill 246 (HB 246) in the hopes that it would make a positive contribution to his community.

"Yoga is literally everywhere," Gray said. "It's in churches, universities, it's at football practice, basketball practice, the local YMCA, so I didn't really think it was a big deal until I introduced the bill and it was heavily opposed by conservative groups."

For the past two years, the bill has been bitterly contested by outfits like the Eagle Forum — which was founded by Phyllis Schlafly, best known for organizing the right-wing movement that stopped the passage of the Equal Rights Amendment and warning of the "psychological" dangers of feminism. She was also supported publicly by former President Donald Trump before her death.

Today, the bill is in a critical stage as it sits in front of powerful Rules Committee, where it waits for approval to be sent along for debate in the full state Senate. Though the bill has already passed through the state House, if the bill is voted down by the Rules Committee, it dies.

"That happened to me my first year, in 2019, where [the committee] didn't want to vote on the bill," Gray said. This time around, there are just three opportunities to get it on the calendar before the legislative session ends.

The 2016 Yoga in America Study found that at least 36 million Americans do yoga. In 2012, a survey estimated that at least 1.7 million children were doing yoga. Considering its increasing popularity, those numbers could be higher now. While many American public schools now incorporate yoga into their physical education curricula, there does appear to be a movement pushing back against it — in 2016, parents at a Georgia elementary school led a movement to ban the word "namaste" from yoga lessons at the school.

In Gray's current iteration of the bill, the use of the word "namaste" — which simply means "hello" and is used as a greeting to show respect in yoga class — is prohibited, which Gray agreed on as a compromise to gain bipartisan support.

Indeed, a large part of resistance to overturn the ban comes from conservative Christian groups who are concerned that exposing children to yoga will promote Hinduism.

"Yoga is a very big part of the Hindu religion," said Becky Gerritson, director of Eagle Forum of Alabama. "If this bill passes, then instructors will be able to come into classrooms as young as kindergarten and bring these children through guided imagery, which is a spiritual exercise, and it's outside their parents' view. And we just believe that this is not appropriate."

The fear echoes anti-Hinduism rhetoric that gained prevalence in the late 19th century in America, and some experts are concerned that such discriminatory sentiments are resurfacing as yoga continues to rise in popularity across the country.

"The legislation kind of reeks of Hindu-phobia, it's like a rewind to the late 19th century, early 20th century, where Hindus were looked upon as this cult that's out to brainwash people and [this belief] that yoga can make you do crazy things," said Nikunj Trivedi, president of the Coalition of Hindus of North America. "We live in a multicultural world, there should be cultural appreciation, rather than appropriating it and saying we're only going to use this, and don't say 'namaste.'"

From literature to immigration laws to labor abuse, the late 1800s and early 1900s saw a rise in anti-Asian sentiments that ran parallel to the rise of Hinduism's popularity in America. Trivedi added that it appears as if Alabama is "reverting back in this situation."

"There are other issues," Trivedi said. "We're seeing a widespread of anti-Asian hatred, which includes a lot of Hindu-Americans being either subjected to online bullying or targets and stuff like that."

Trivedi said he's been subjected to personal attacks and harassment since speaking out about the ban, adding that any fears about exposing children to Hinduism are "unfounded." Trivedi emphasized that the Coalition of Hindus of North America is in support of the effort to overturn the ban, and continues to be frustrated by the resistance. At the same time, he said he understands that those fears might come from a lack of understanding.

"Sometimes people don't understand what the practice really means, and they have this fear that by doing that, people will automatically become Hindu," Trivedi said.

Still, he fears it's going to be a "tough battle" to get the bill passed through the Republican-controlled Alabama state Senate.

"There are people on the ground who are resisting it," Trivedi said.

Gray told Salon that his opponents are a small group of people who hold a lot of power, and that the controversy around this bill highlights the bigger challenges the state of Alabama faces: its inability to progress.

"This bill just shines a light on what goes on in Alabama, and why it's so hard for us to progress as a state," Gray said. "To me, the bigger story is where we are in Alabama, and were we need to be, and just the work that we need to do to actually catch up and be more of a progressive state, so we can attract younger people, and innovative people, and I think it starts with having an understanding of a great legislation that's good, especially for K through 12 public schools."