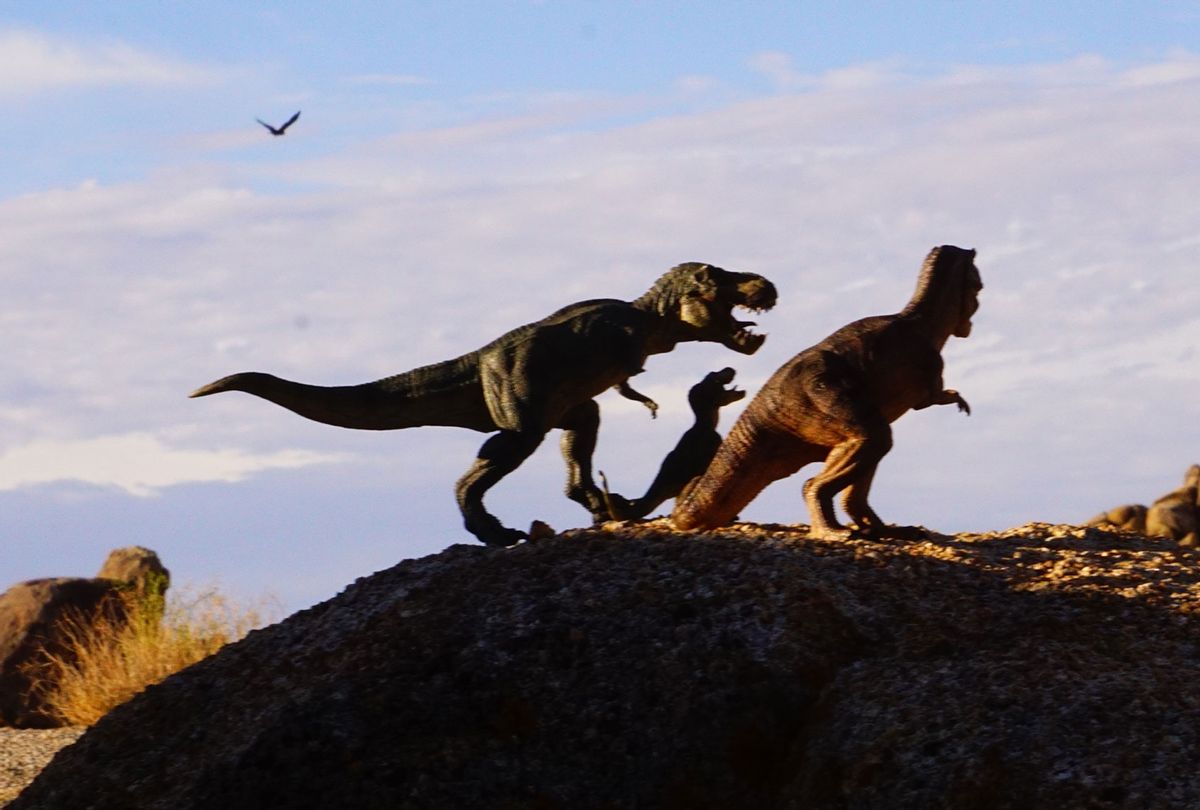 Among all the dinosaurs, the Tyrannosaurus rex holds a special place in human culture. The fearsome predator is one of the most iconic dinos, well-represented in film and literature. In the classic 1993 movie "Jurassic Park," T. Rex appeared as a solitary monster, hunting the protagonists and other dinosaurs with bloodthirsty gusto.

Now, it turns out the stereotype of the tyrannosaur as a "lone wolf" predator may be a misconception.

A new study published in the scientific journal PeerJ, based on a paleontology discovery of a number of tyrannosaurs of the species Teratophoneus, reveals that those tyrannosaurs hunted in packs. Perhaps, then, "Jurassic Park" and its sequels were wrong: in real life, tyrannosaurs may have had plenty of help from their friends in stalking their prey.

The academic paper is based on a 2014 paleontological find in Utah's Grand Staircase-Escalante National Monument, one that yielded fossils of a group of tyrannosaurs from the species Teratophoneus. After studying chemical and physical elements at the site, the researchers determined that a group of four or five of the animals died at the same time during a flood. Their remains were washed into a lake, where they were turned into bones before being moved by a river that eventually evaporated.

One of the main takeaways from this is that, at least for this group of tyrannosaurs, they likely hunted in packs rather than on a solitary basis. It is unclear why they would have evolved to do this, although one possible explanations is that it could have made it easier for them to compete for food and resources against herbivorous (plant-eating) dinosaurs.

"It turns out reality is almost always more complicated than we imagine it," Dr. Alan J. Titus, paleontologist for U.S. Bureau of Land Management's Paria District and the corresponding author of the study, told Salon by email. "In the case of tyrannosaurs (like T-rex), our take-home message is these animals were almost certainly more complex (and probably smarter) than most people would think."

He compared tyrannosaurs to birds, noting that scientists are currently reevaluating their views on avian intelligence and adding that "birds can be incredibly smart, and birds are dinosaurs."

Likewise, while the animals discovered in Utah are related to the iconic T. Rex, Teratophoneus curriei are not quite the same. The two species had different sizes and lived during different periods of history.

"They are related, but because of the size differences alone, they may have had different behavior (e.g. T. Rex may not have been as social as an adult)," Titus pointed out. "What we've done is demonstrate that this pattern of finding intergenerational groups of tyrannosaurs (generic term for the family) killed and buried at the same time is widespread in North America. No other large predatory dinosaur shows this pattern. Therefore, we conclude it was their behavior that keeps creating these mass death sites, not the environment."

This argument, while already accepted for certain types of dinosaurs "is still a bit contentious among tyrannosaur specialists," Titus observed. "Skeptics to the social hypothesis feel tyrannosaurs lacked the intelligence to hunt cooperatively, which is really the only reason predators form social groups."

The most challenging aspect of this study was, as Titus explained, proving that the tyrannosaurs in question died at both the same time and in the same location.

"Because the site's history was complicated by the tyrannosaur skeletons being dug up and reburied, it was a difficult task that required very sophisticated techniques like mass-spectroscopy, x-ray crystallography, and scanning electron microscopes," Titus told Salon. "Although we could never be 100% sure, in the end we concluded a very high probability that they had in fact all died together as a group."

That, in turns, increases the likelihood that they had lived as a group — and, as a word of caution for anyone dreaming of building a time machine to the dinosaur era, hunted as a group.