Basically, there's no such thing as a "Judeo-Christian values." 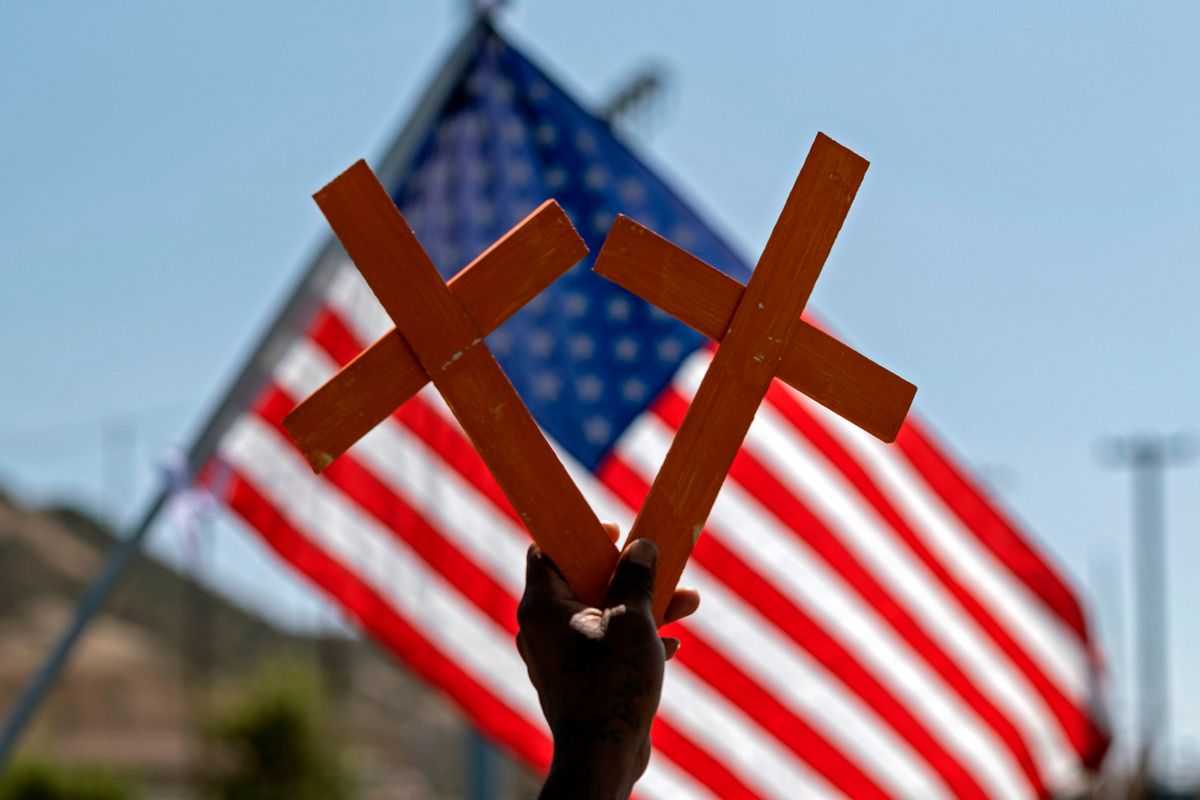 Crosses in front of a US flag. (GUILLERMO ARIAS/AFP via Getty Images)
--

A common rallying cry of the right in America, to justify regressive morality laws, is often to say that "America was founded as a Christian country" with "Judeo-Christian values" while the common response from the left is to declare that the United States was founded as an explicitly secular country with a separation of church and state.

Would it surprise you to learn both are wrong?

Initially, in the 19th century the phrase referred to Jewish people who converted to Christianity. It wasn't intended to be inclusive of Jews at all. The current meaning of the term was an invention of American politics in the 1930s, as a phrase to show opposition to Hitler and communism. "Judeo-Christian values" is often used by politicians to proclaim common opposition to atheism, abortion and LGBT issues.

Basically, there's no such thing as a "Judeo-Christian values."

Except Judaism and Christianity don't have a common value system on those issues. While it is hard to declare a universal Jewish value—there are many sects of Judaism and one of our core tenets is argument—most Jewish rabbis acknowledge that abortion should be allowed at least in certain circumstances. Jewish law dictates that life begins at first breath, not conception. Additionally, many Jews consider themselves atheists and consider Jewish practice to be through behavior and attitude, not belief. Unfortunately the acceptance of LGBT people in Judaism is more complicated, depending on the sect, but Reform and Conservative Judaism are publicly accepting of LGBT people. Basically, there's no such thing as a "Judeo-Christian values."

The United States was founded with an attempt at secularism as well as freedom of religion. As opposed to monarchies, democracies in general are less Christian-based, as rulers are not justified on the "divine right of kings." Practically, "freedom of religion" often meant the freedom to practice whichever sect of Christianity, or sometimes even Protestantism, a person chose. Considering a number of colonies were founded based on disagreements over which Protestant sect was "correct," even this level of legally inscribed religious freedom was progressive for the late 18th century.

However, when considering religious freedom in early America, we must look beyond federal law and beyond the Bill of Rights. The Bill of Rights was not applied to the states, except to declare the citizenship of formerly enslaved people, until the Incorporation Doctrine was applied to incorporate the Bill of Rights to the states through the Due Process Clause of the 14th Amendment. This doctrine has been traced to Gitlow v. New York in 1925, when the Supreme Court held that states were required to protect freedom of speech, partially incorporating the First Amendment.

The relevant text of the First Amendment states that, "Congress shall make no law respecting an establishment of religion, or prohibiting the free exercise thereof." This text is meant to prevent an established state religion but also to protect religious practice from government interference. While protection from a theocracy is important, it is hard to argue that this text is meant to enforce secularism. Additionally, the phrase "separation of church and state" is actually paraphrased from a letter written by Thomas Jefferson in 1802. It was not interpreted as part of the intent of the First Amendment until Reynolds v. United States in 1878.

It's tempting to push back by declaring the United States was founded as a secular country. Unfortunately, that claim would ignore a long history of the privileging of Christianity.

Most early colonies supported religious action with taxes. Many established state religions. While some disestablished with early state constitutions, Connecticut, New Hampshire, Massachusetts, Maryland, Rhode Island and North Carolina didn't. The Massachusetts Constitution limited office to Protestants until 1821. Non-Protestants couldn't hold office in New Hampshire until 1876.1 Maryland, Rhode Island, North Carolina and New Hampshire did not allow non-Christian voting until well into the 19th century when the franchise expanded in 1826, 1842, 1868, and 1877, respectively.2

At the federal level, religion became relevant to citizenship when coupled with questions of "whiteness." Naturalization required an immigrant be "white" or of African descent after the Civil War until 1952. This requirement led to a number of cases, dubbed "prerequisite cases," brought by immigrants to prove their "whiteness." One consideration for the courts was the "racial performance" of immigrants to determine how successfully they would assimilate. Courts often used an immigrant's lack of Christianity as a detriment to assimilation and therefore to whiteness.

There were also forms of state-sponsored discrimination against non-Christians that did not require explicit privileging of Christianity over other religions. Consider the ubiquity of "Sunday Laws," which prohibited people from working Sundays. Jews had to work on the sabbath (Saturday), lose two days of work over the weekend or risk prosecution. These laws resurged in 1880s New York with the arrival of more Jews.3

Non-Christians, particularly Jews, faced discrimination in court. Courts often required people to appear on Saturdays and would forbid a "religious exemption" for Jews.4 Many also considered a belief in Jesus Christ as a requisite for swearability on the witness stand. Not until 1857 did a New York court ruled a Jewish witness must be sworn to testify according to the "peculiar ceremonies of his religion," specifically a Hebrew Bible and with his head covered.5 Jewish witnesses got legal protections in 1871. A Jewish plaintiff was questioned about his belief in Jesus Christ to impeach his honor under oath in a property dispute. When appealed, a Georgia court said a "want of belief in Jesus Christ as the Saviour" was not grounds for exclusion of a witness, and that while some courts have used a belief in Jesus as necessary to render a witness competent, the court clearly ruled that "a Jew is competent at common law."6

It's tempting to push back against politicians justifying their regressive morality laws by way of the "Judeo-Christian values" of the founding. It's tempting to push back by simply pointing to the First Amendment and declaring the United States was always founded as a secular country. Unfortunately, that claim would ignore a long history of discrimination against minority religions and the privileging of Christianity.

In order to fight for a truly religiously inclusive society, we must acknowledge the ways in which Christianity is embedded in the laws and culture of our society. Luckily the founders provided the First Amendment, an important tool in this fight.