Several GOP lawmakers are spreading falsehoods about the Three-fifths Compromise 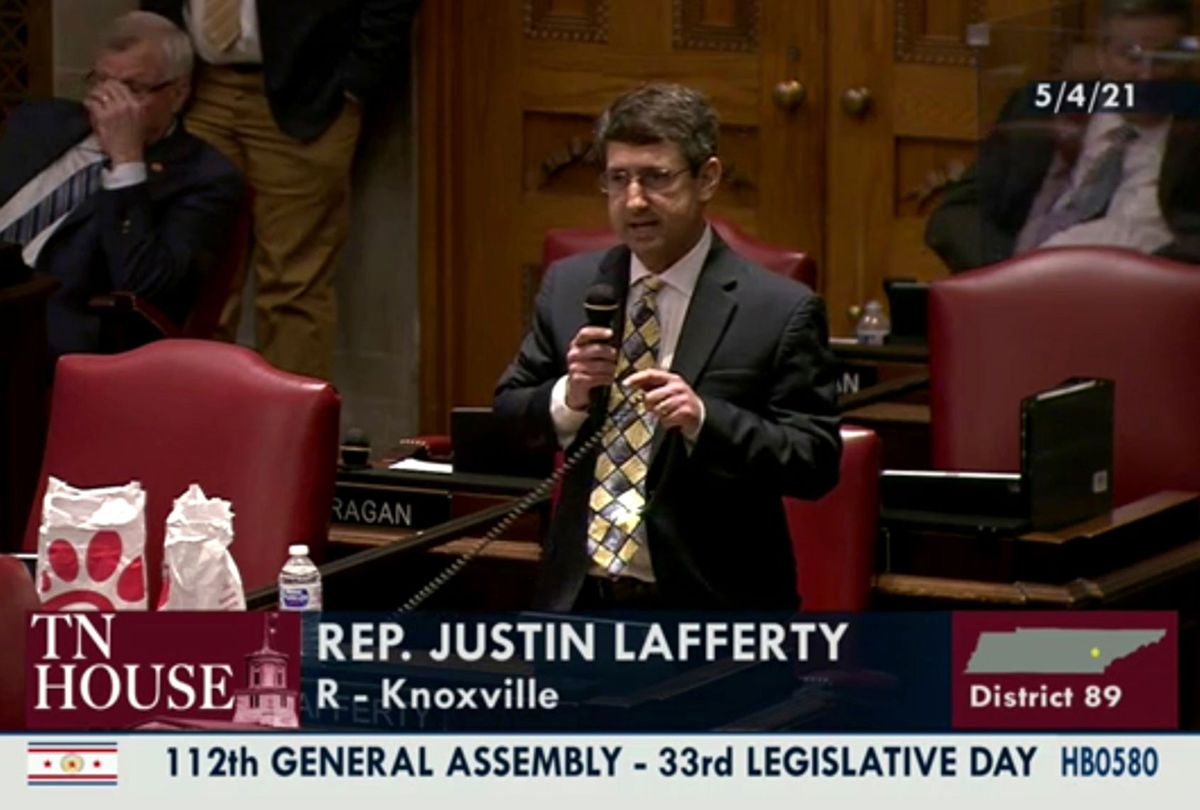 In this still image from video provided by the Tennessee General Assembly, Rep. Justin Lafferty, R-Knoxville, speaks on the floor of the House of Representatives at the State Capitol in Nashville, Tenn., on Tuesday, May 4, 2021. Lafferty falsely declared that an 18th century policy designating a slave as three-fifths of a person was adopted for “the purpose of ending slavery,” commenting amid a debate over whether educators should be restricted while teaching about systematic racism in America. (Tennessee General Assembly)
--

Republican state lawmakers are not letting up in their effort whitewash elements of American slavery, with just two in the past several weeks claiming that the Three-Fifths Compromise was actually a necessary evil for abolition.

On Tuesday, Tennessee state Rep. Justin Lafferty took to the House floor to deliver an ahistorical rant about why the Three-Fifths Compromise was actually "a direct effort to ensure that Southern states never got the population necessary to continue the practice of slavery everywhere else in the country."

He explained: "By limiting the number of population in the count, they specifically limited the number of representatives that would be available in the slaveholding states, and they did it for the purpose of ending slavery — well before Abraham Lincoln, well before Civil War. Do we talk about that? I don't hear that anywhere in this conversation across the country."

Lafferty's diatribe was met with rapturous applause from his Republican colleagues.

Last month, as the Washington Post reported, a similar narrative was bandied by Colorado GOP legislator Ron Hanks, who framed the compromise as "an effort by non-slave states to reduce the amount of representation the slave states had."

Hanks concluded, without a lick of irony: "It was not impugning anybody's humanity."

Prior to his speech, Hanks had reportedly made a joke after being mistakenly addressed as Rep. Mike Lynch, one of his GOP colleagues.

"Being called Mr. Lynch might be a good thing for what I'm about to say," he said, adding, "No, just kidding."

Manisha Sinha, the Draper Chair in American History at the University of Connecticut, told the Huffington Post that Laffety's comments "are completely incorrect and would be discredited by any respectable historian or even a middle schooler who knows American history."

The Three-fifths Compromise – despite what Republicans have said – was actually an agreement that had less to do with abolition than it did the political football of apportionment at the time. During the 1787 Constitutional Convention, the South had pushed for its enslaved population to be counted in the process of determining how many representatives it would have in Congress. The North, seeking to limit the South's congressional power, pushed back on this effort, eventually leading to a compromise in which enslaved people were counted as three-fifths of a person. The move did not grant slaves freedom or voting power.

Dr. Joanne Freeman, Professor of History and American Studies at Yale University, wrote that, if anything, the compromise reaffirmed that enslaved people were seen as subhuman. "The 3/5 Comp. let slaveholding-states count enslaved people--viewed as "property" – people EXCLUDED from their polity– in the count for representation," she tweeted. "It didn't help end slavery. Just the opposite. It gave the S outsized representation & helped them preserve slavery & power."

"Remember that the three-fifths compromise wasn't a compromise about the rights of enslaved people—enslaved people were considered zero fifths of a person under it, not three," echoed Angus Johnston, a history professor at CUNY. "It was about how much extra power slaveowners would be given compared to OTHER WHITE PEOPLE."

Rep. Hakeem Jeffries, D-N.Y., chimed in: "The three-fifths compromise was not a bitter pill. It was an immoral agreement to cement the power of slaveholders and white supremacy. We will not allow those who seek to protect their privilege and mediocrity to sanitize history."

Lafferty's comments are just the latest example of the GOP's penchant for revisionist history.

Late last month, after introducing a bill that bans "divisive concepts" from public school curriculum on race, Louisiana state Rep. Ray Garofalo insisted in a floor speech that teachers should be encouraged to teach the "good" of slavery.

"If you're teaching, if you're having a discussion on, whatever the case may be, on slavery, and you can talk about everything dealing with slavery," rambled Garofalo. "The good, the bad, the ugly, the whole..."

"The question [Garofalo] should have pushed back [Hilferty's] way was was their marriages in slavery? Were families and precious babies born (and I am talking about life itself) into or out of slavery? Were slave owners ever known to be 'GOOD' to their slaves? Were slaves ever known to LOVE their masters? [...] Did generations of beautiful LIFE come from those who were sold into slavery, from Africa, and sold by Africans, make America the beautiful DIVERS culture it is today? [...] Was it true that some slaves never wanted to leave theIr plantation because it had become their home? Were some slaves treated with love and respect by their masters?"

As Salon reported on Tuesday, Republican-majority legislatures in states like Idaho, Missouri, Florida, Oklahoma are also leading efforts to impose outright bans on the use of critical race theory in public school systems, arguing that teaching about the history of systemic racism in the U.S. sows unnecessary divisions between Americans.