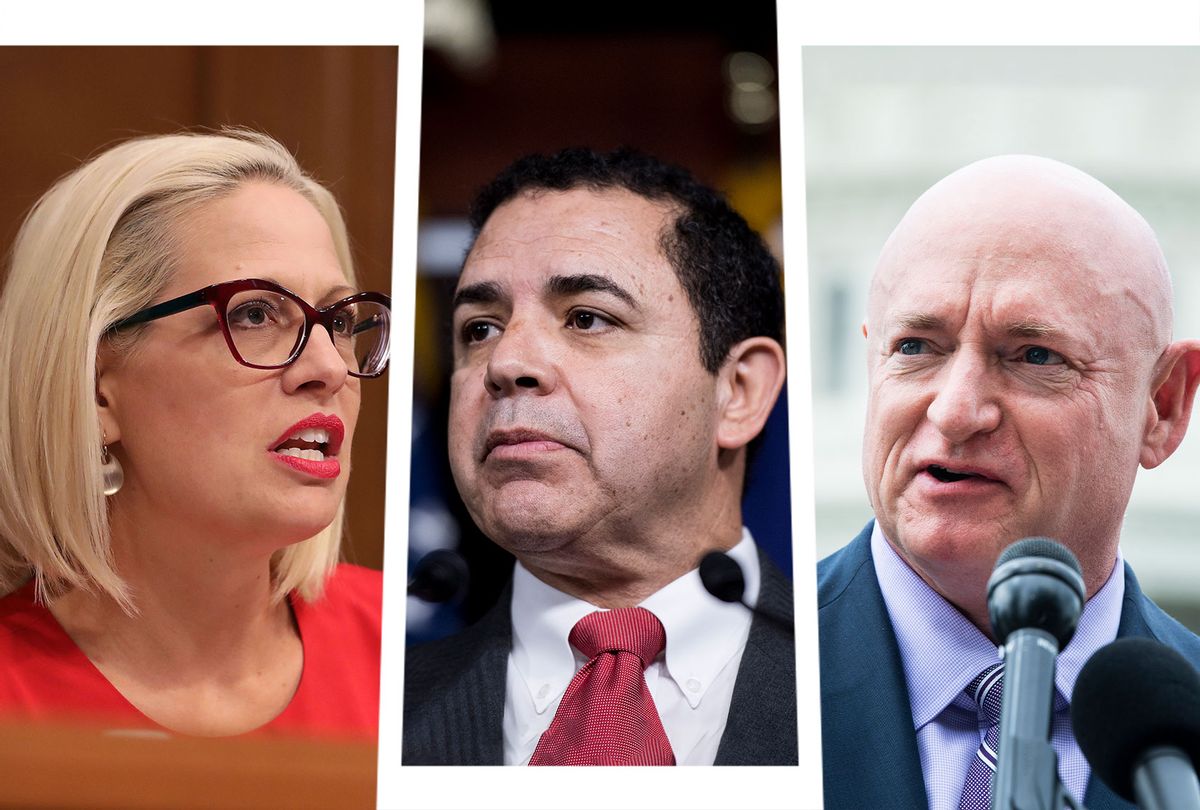 President Joe Biden is facing increased criticism from border-state Democrats who complain that there is a migrant "crisis" at the U.S.-Mexico border.

On Thursday, Sen. Kyrsten Sinema, D-Ariz., called upon the administration to "do more" to address the recent uptick in migrant crossings at the border, a disproportionate number of which have recently been children.

"The reality is that this is a crisis," Sinema told KTAR News. "We all know it, and the federal government must do more to address this surge of migrants who are coming to the border with increasing numbers each year."

Speaking from personal experience as an Arizona resident, the senator said that she knows "firsthand how Arizona, especially our small border communities, have been paying the price for our federal government's failure to fix our system over the past several decades."

Sinema, the chair of the Senate Subcommittee on Government Operations and Border Management, added: "What I'm waiting for is the administration to take bold action to actually address these concerns."

Her comments came on the same day that U.S. Border Patrol granted entry to a cohort of reporters for an inside look into the present conditions at the largest migrant detention facility in the U.S, Texas' Donna complex. Prior reports of the complex last month alleged severe overcrowding, insufficient sanitation, and a lack of basic resources, subjecting migrant children to "jail-like conditions," as CNN described.

According to the latest cohort of reporters, conditions appear to have markedly improved. A Border Patrol chief in Texas told reporters that its detention population had decreased from 4,300 to 800 – an 80 percent drop from late March. "Overcrowding at Donna was not apparent," CBS reported, and the number of detained child migrants had significantly dropped.

However, on Tuesday, Rep. Henry Cuellan, D-Tex., accused the Department of Homeland Security (DHS) of whitewashing the crisis by releasing misleading photos of a near-empty Donna complex, according to Fox News.

"All they're doing is, they're moving kids from one tent to the other tent and saying, 'Oh, they're not in the Border Patrol (custody),'" Cuellar told Border Report. "They're just next door in HHS," he added, implying that the DHS preemptively moved migrant children to separate tents run by the Department of Health and Human Services (HHS). DHS officials later confirmed that the children were in HHS custody, but would not disclose exactly where.

Last month, Biden saw more Democratic pushback against his border policies when Sen. Mark Kelly, D-Ariz., a known Biden ally, pointed out that the President omitted any meaningful border plan during his first address to Congress, according to Politico. Kelly specifically referred to the situation at the border as a "crisis" – a term that has been repeatedly parried by White House press secretary Jen Psaki.

The Congressman told Politico: "This continues to be a major problem that shouldn't fall on the shoulders of Arizona communities. And I think it was important to highlight that it wasn't part of the address last night," Kelly said in an interview. "We've got to address this and it can't be on Arizona taxpayers and Arizona towns that are really struggling right now. It's a federal government problem."

"Sen. Sinema has been clear that she – along with Sen. Kelly – wants to see more action from the administration to address the border crisis and support Arizona border communities," a Sinema spokesperson said.

Earlier that month, President Biden also saw scorn from Rep. Vicente Gonzalez, D-Tex., who warned in a CNN appearance that the administration's border policies could be "catastrophic" for the U.S. Gonzalez took a specific issue with the fact that thousands of migrants who had been recently detained at the border were being released into the U.S. prior to migrants that had been waiting for years in Mexico as a part of the DHS's "Remain in Mexico" program, a Trump-era policy which forced asylum-seeking to wait in Mexico until receiving official admittance into the U.S. (President Biden reportedly ended this program back in March.)

"If that is the message that we send to Central America and around the world," Gonzalez explained, "I can assure you it won't be long before we have tens of thousands of people showing up to our border and it will be catastrophic for our party, for our country, for my region, for my district."

He added: "I think we need to have a better plan in place. I think asylum seekers should be able to ask for asylum and be processed in their home country or a neighboring country and we shouldn't have a policy in place that influences people to make this 2,000-mile trek where cartels and human traffickers are enriching themselves.