As ticket sales rise, researchers say they understand how to stop transmission on planes. Are airlines listening? 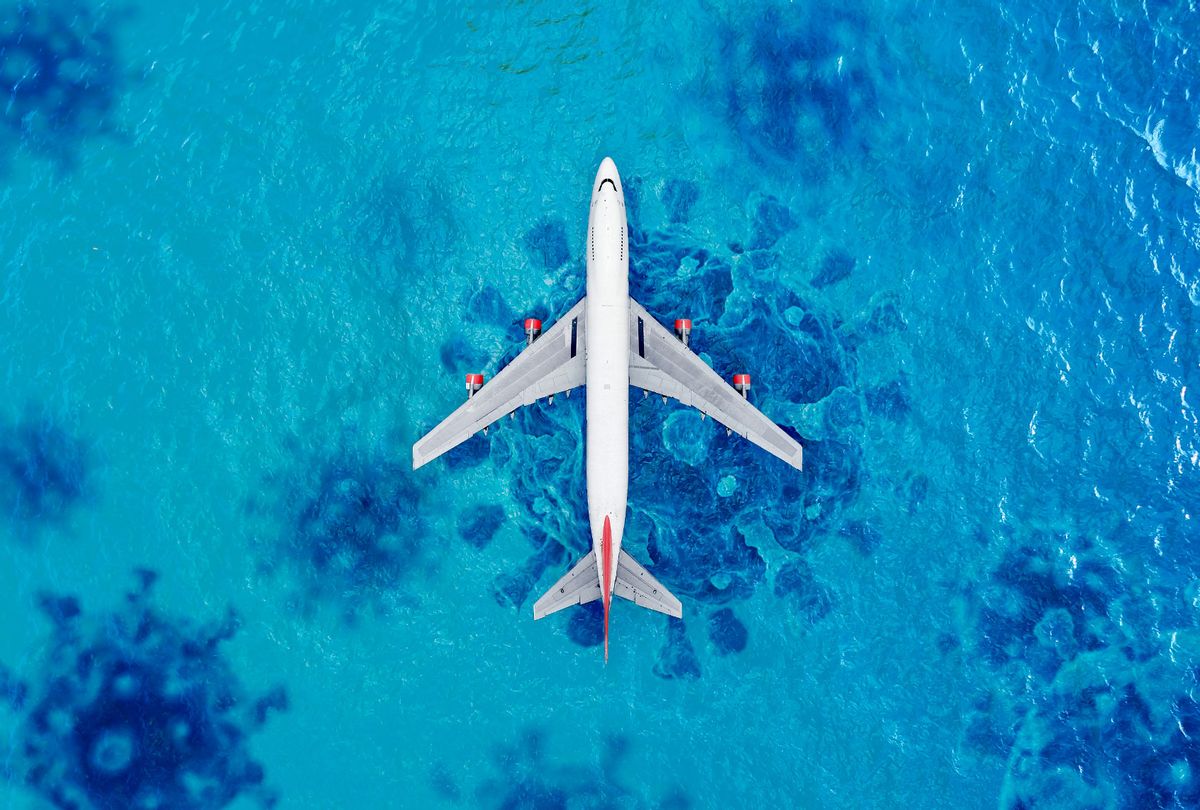 The COVID-19 pandemic changed everything for the airline industry. Besides the obvious need for safety measures to counter an airborne virus, the industry suffered "the largest drop in air travel in history," according to the International Air Transport Association (IATA), a 290-member trade association for the global airline industry. This drop in traffic was not entirely consumer-driven, as governments throughout the world limited travel to slow the spread of the novel coronavirus.

The losses for the industry are shattering, though likely not surprising. Anyone who has been conscious since the start of 2020 knows about how the COVID-19 pandemic triggered a wave of fear, in particular of flying. There you are, in a tight space with nowhere to escape, surrounded by strangers packed tightly together like sardines in a can. How could anyone feel safe in those conditions when there is a deadly, airborne disease causing a global panic?

Inevitably, major American airline companies have been touting their safety procedures as a response to this, and in an attempt to get consumers feeling safe about travel again. From Delta talking up the importance of safety while explaining its mask-wearing requirement and Southwest explaining its travel restrictions as part of "taking care of you" to United declaring that "your safety is our priority," airlines make a point of emphasizing that they care about protecting their customers from infection. (All three companies are part of the trade association Airlines for America, not the IATA.)

So how effective are these safety measures? Knowing that means knowing how likely it is to get the virus from air travel — and it turns out that the numbers there are still debated.

"It is difficult to tease out exposure on the plane from community exposures," a representative from the Centers for Disease Control and Prevention (CDC) told Salon by email. The IATA offered a similar response, writing that "there have been instances of COVID-19 spreading on planes, however, the number of number of confirmed or suspected instances of onboard infection are quite low measured compared to the nearly 1.8 billion passengers last year."

Yet that does not mean people can't be at risk while sitting on planes. The question is what airlines can — and  should — do about it.

One recent study looked at boarding procedures, and how they might be optimized to prevent transmission. Recently, companies like Delta and United have been loading passengers in the reverse order — from the back rows first, working their way up to the front rows — in order to minimize how often customers pass each other. (Business class still boards first on Delta and usually on United, according to the report.)

But a new study, published last month by Royal Society Open Science, suggested that such practices are not actually that helpful in minimizing transmission. Rather, researchers argue that the main factor fueling increased exposure to infection is how passengers will cluster together while waiting to take their seats and for their luggage to be put away. As a result, back-to-front boarding leads to approximately twice as much exposure to infection as random boarding procedures, and increases exposure by 50% from the usual pre-COVID-19 process. They instead urge airlines to board seats starting with the windows and then moving to the aisles.

Moreover, the researchers in the Open Science study suggested that banning the use of overhead bins to store luggage would greatly reduce exposure to possible infection. They also studied the effect of keeping middle seats empty and found that doing so "yields a substantial reduction in exposure," although they added that "our results show that the different boarding processes have similar relative strengths in this case as with middle seats occupied."

Are airlines doing this? Not anymore.

"They generally started last summer," Dr. Ashok Srinivasan, a professor of computer science at the University of West Florida who helped author the report, wrote to Salon when asked about leaving middle seats unoccupied. "It included Delta, Southwest, etc. Even those that did not guarantee middle seats being empty took some measures to enable it when possible, which was not too difficult with empty flights."

He added that this is no longer the case. "They started stopping it early this year, with Delta being the last one that I am aware of, which stopped this end April," Srinivasan explained. The IATA told Salon that it did not have statistics on airlines' middle seat policies and that "we do not have data" on airlines barring the use of overhead storage bins.

Another recent study, this one released by the CDC in conjunction with Kansas State University, reinforces the importance of not occupying middle seats. The researchers found that passengers were exposed to "viable" virus particles 23% to 57% less often in planes that block middle seats. According to USA Today, no American carriers are blocking the middle seats for economy passengers at the time of this writing.

In response to Salon's questions about their COVID-19 safety precautions, a spokesperson for Airlines for America emphasized that the company is very serious about keeping passengers safe and has relied on scientific research to do so.

"U.S. airlines have implemented multiple layers of measures aimed at preventing virus transmission, including strict face covering requirements, pre-flight health-acknowledgement forms, enhanced disinfection protocols and hospital-grade ventilation systems," the spokesperson explained by email. "Multiple scientific studies confirm that the layers of protection significantly reduce risk, and research continues to demonstrate that the risk of transmission onboard aircraft is very low." They added that scientists with the Harvard Aviation Public Health Initiative had praised airplane ventilation and the use of layers of protection in terms of their effectiveness in reducing possible COVID-19 exposure.

Southwest Airlines told Salon by email that it "does not assign seats and has always had an open seating policy – Customers can choose any seat they like. We simply board in numerical order determined by time of check-in." The representative added that Southwest has not considered banning overhead bins and only blocked middle seats through Dec. 1.

United Airlines referred Salon to their trade association for comment on the studies and to its website for answers to other safety questions. Delta did not respond to a request for comment as of the time of this writing.

In its official statement responding to the CDC report, the IATA said that "it's important to note that this laboratory study did not consider the significant risk-reduction impacts of the wearing of facemasks by passengers and cabin staff (nor could it have, given that the data collection occurred in 2017)." The statement cited scientific studies which it claimed supported its argument that mask-wearing keeps transmission to a minimum. The IATA also told Salon by email that, when it comes to the Royal Society study, it believes it is "an interesting mathematical modeling study of social proximity" but "does not look directly at infection risk." They noted the authors' support of boarding passengers at random, not using overhead bins, boarding window seats before aisles and leaving middle seats vacant, concluding that "we await with interest their planned further study."

Srinivasan told Salon, "They are relying mostly on the mask mandate. They do perform disinfecting intensively, which is not particularly useful because fomite transmission is rare." (Fomites are inanimate objects which can transmit diseases after they have been on them for a lengthy period of time.)

Dr. Monica Gandhi, infectious disease doctor and professor of medicine at the University of California — San Francisco, told Salon that the studies suggest there is a higher risk associated with proximity but said that conditions may have changed since we have developed vaccines.

"However, with more and more people vaccinated in the U.S., passengers may move towards putting children (who can't be vaccinated yet) in the middle between parents," Gandhi told Salon by email. "Moreover, with universal masking still on planes and higher rates of those in the U.S. getting vaccinated, the risk of transmission will definitely be much lower than once these studies were done. I would think about boarding differently to avoid too much mixing in the aisle and advising airlines to only book the middle seats for families while we are in this in-between period of vaccines."

"While spacing out passengers remains a sound practice, the raising degree of vaccination in the country is making this practice less important," Benjamin emailed Salon. "Mask wearing on planes is still an essential part of protections for now in line with CDC recommendations even for vaccinated individuals."  He added that while the studies are interesting, "there are so many confounding variables in an airport travelers experience that it is very very difficult to process these kind of findings without several other confirmatory studies."

Dr. Russell Medford, Chairman of the Center for Global Health Innovation and Global Health Crisis Coordination Center, told Salon by email that "CDC guidelines are based on the relative contribution of these multiple transmission risk factors so that today, based on the best current scientific data, airline travel is considered safe for the individual if one is both fully vaccinated and adheres to rigorous mask-wearing."