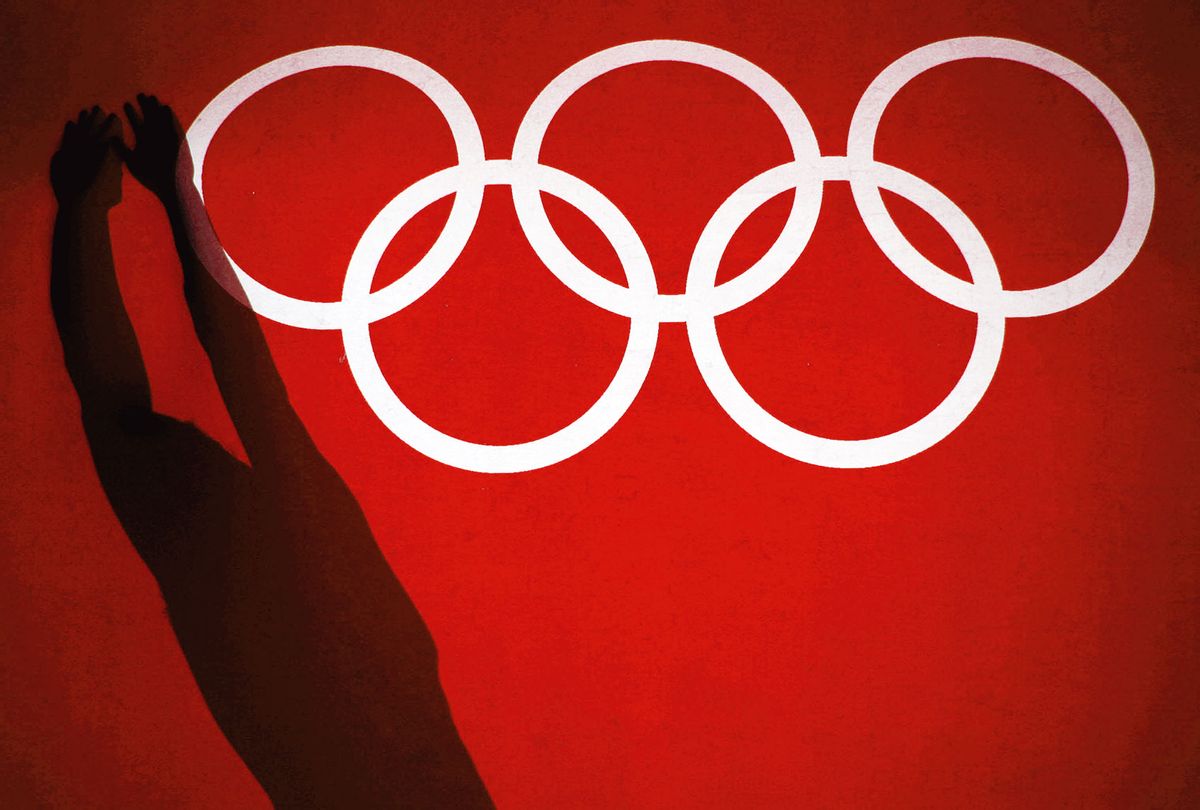 Shaddow of USA swimmer stretching next to the Olympic Rings before entering the pool for practice. (Photo illustration by Salon/Donald Miralle/Getty Images)
--

The annals of foxes guarding chicken coops reached a new pinnacle of sorts with the January appointment of Michael Henry as chief of the federal courts' Office of Judicial Integrity. The office was established in 2019 to curb workplace sexual harassment by judges, following reports of the abusive behavior of Judge Alex Kozinski of the Ninth Circuit Court of Appeals in California (who then abruptly retired in 2017).

Henry had been chief legal officer at the U.S. Olympic Committee's heavily hyped and dreadfully ineffective internal affairs division, the U.S. Center for SafeSport, which launched in 2017. Or was he, rather, the "director, investigations & outcomes"? The center's personnel and their designations are not publicized at its website or elsewhere, so throughout his tenure, Henry toggled effortlessly between these two job descriptions on his LinkedIn page. As we'll see in a threshold anecdote below, he even directed other investigators to pass him off as an office flunky when it suited what critics perceive as the main purpose of the organization — to tamp down complaints rather than to bring justice to them.

Almost everything surrounding Henry's history speaks to the brazen mendacity of what might be called the sexual-abuse industrial complex, where legitimate claims go to die — or in legal-eagle parlance, to get "risk-mitigated."

According to whistleblower employees at the center's Denver headquarters, Henry was pushed out last September. He was said to retain outsize influence, however, with Heather O'Brien, the current director of legal affairs, in the processing of a backlog of hundreds of complaints of sexual abuse and harassment by coaches and other officials at the Olympic sports' national governing bodies. In the four months between that job and his hire by the federal courts, Henry was a partner at the Pennsylvania-based consulting company TNG.

SafeSport's 2019 nonprofit filing with the IRS showed that Henry was the organization's highest-paid employee that year, with a salary of $148,938 and additional "bonus & incentive compensation" of $69,985. (The same filing lists $180,000 in payments to the Virginia company of SafeSport's public relations consultant, Dan Hill, who has publicly bragged that he works pro bono.)

Among the messes Henry left behind was a cyberhack of the confidential SafeSport complaint database, which potentially exposed abuse victims not only to invasion of their privacy, but also to compounded harassment and retaliation. The hack was first reported in October by Katie Strang of The Athletic. Office insiders told me that the vulnerability of the SafeSport database was actually exposed last spring, but that CEO Ju'Riese Colon didn't notify Congress or law enforcement until the fall. SafeSport's computer server had been housed in an uber-secure location: the office kitchen.

In general, the public has little idea what a farce the Olympic apparatchiks' variously packaged SafeSport™ programs have been from the start. The term was birthed at USA Swimming in 2010, after its late CEO, Chuck Wielgus, faced a backlash following his fidgety, callous performances in interviews for investigative stories about the sport's widespread abuse problem on ABC's "20/20" and ESPN's "Outside the Lines." Wielgus' solution was to hire a former swimmer with a social worker degree, Susan Woessner, as the group's "athlete protection officer," later amended to "director of SafeSport."

Deposition testimony in civil lawsuits by abuse victims has established that Woessner's hiring changed absolutely nothing about the way the organization processed abuse complaints. Before SafeSport existed, an office secretary would pass along to Wielgus notes about allegations that had been phoned or mailed in. The CEO then decided if they rose to the level of requiring investigation by a rotating team of contract detectives (often retired FBI agents double-dipping on their government pensions). When such an investigation was completed, it was again Wielgus who decided, all by himself, whether the matter would be turned over to swimming's National Board of Review for adjudication.

All the new "director of SafeSport" did was to serve as the new functionary who shuttled messages to the chief executive for disposition, at his sole discretion. Woessner also provided an acceptable face for USA Swimming's presence at conferences about how to eradicate abuse in youth sports. Typically, such conferences focused on vigilance against "stranger danger," thereby totally (and perhaps deliberately) avoiding the questions of the inherent power dynamics in relations between vulnerable underage athletes and their coaches, who knew each other well.

USA Swimming made Woessner's hire a family package deal, also bringing her sister, Geri Woessner, into the marketing department as "business development manager." Geri Woessner is no longer listed on the staff directory, but worked there for several years.

One of Susan Woessner's very first swimming SafeSport investigations, in late 2010, concerned a coach from Seattle, Sean Hutchison. According to sources quoted in the Washington Post, Hutchison had begun an inappropriate relationship with swimmer Ariana Kukors at a new professional development center in Fullerton, California. Hutchison was exonerated in USA Swimming's investigation, but he left the Fullerton post.

In 2018, in the wake of explosive public revelations about the sexual abuse crimes of USA Gymnastics doctor Larry Nassar, Kukors' litigation against USA Swimming over Hutchison's years of grooming and abuse of her neared a climax. Kukors' lawyer, B. Robert Allard, presented the organization with evidence that Hutchison had also formerly had a sexual relationship with Susan Woessner, the SafeSport director, a clear — and, under the circumstances, shocking — conflict of interest that Woessner had not disclosed. Woessner resigned, saying in her resignation statement that she had "engaged in kissing on a single occasion" with Hutchison in 2007, but denying a sexual relationship. (Hutchison is believed to have fled to Brazil.)

Despite this record, the Olympic Committee has held up swimming as its model sport when it comes to grappling with abuse accusations. In 2013, Rep. George Miller, a California Democrat, announced that he would investigate USA Swimming from his position as ranking member of the House Committee on Education and the Workforce. USA Swimming managed to blunt the probe with a six-figure PR and lobbying campaign that included an "independent review" of the SafeSport program by Victor Vieth of Gundersen Health System. Vieth's report said swimming was doing a fine job of policing itself, but did not disclose how much USA Swimming had paid Gundersen to say that.

When it came time to take the SafeSport concept sports-wide, the Olympic Committee hired as its center's founding CEO Shellie Pfohl, who had been executive director of the President's Council on Fitness, Sports & Nutrition under Barack Obama. Pfohl showed up for one of her maiden media appearances, on a TV news program in Denver, wearing an official U.S. Center for SafeSport pullover and armed with chirpy soundbites about how guarding against coach abuse was in no way incompatible with the quest for gold medals. She looked less like the Olympics' top cop than a brand-extension ambassador.

Sarah Ehekircher is one of many athletes whose complaints to the SafeSport center got the Michael Henry treatment. After running away from home at age 16 in the 1980s, Ehekircher had been housed by her club swimming coach in Colorado, Scott MacFarland, who soon embarked on a morally and legally asymmetrical, years-long, on-and-off relationship with her that crossed multiple state lines. MacFarland was part of a nationwide tree of coaches, several of whom are now on the banned list for sexual abuse, who worked under Mark Schubert, head of the prominent Mission Viejo Nadadores in Southern California and later the national team coach.

After years of major media blackout, Ehekircher finally got to tell her story last year in Britain's Guardian newspaper, under the headline "My swim coach raped me when I was 17. USA Swimming made it disappear." Her lawsuit against USA Swimming and MacFarland is ongoing in California state court. USA Swimming says MacFarland has now retired.

Ehekircher was one of the first historical abuse survivors to turn to Chuck Wielgus' SafeSport process in 2010, but got no satisfaction at her National Board of Review hearing and instead came out of it feeling sandbagged and re-victimized. She hoped for a better fate from the national SafeSport Center in 2018.

For their initial intake interview, the SafeSport case worker, Kathleen Smith, told Ehekircher to meet her not at the center offices but at another address in Denver. It turned out to be the office of the Zonies law firm, which was counseling the Olympic Committee.

On the eve of the interview, after business hours, Smith also advised Ehekircher in an email: "I just wanted to let you know that another member of the Response and Resolution team, Michael Henry, will be joining our meeting tomorrow. We try to have a second person whenever possible to help with note-taking and any miscellaneous things that may need to be done."

At the interview, both Smith and her designated gopher — who was in fact the chief in-house lawyer, not just "another member" of the team — aggressively cross-examined Ehekircher about every aspect of her life from before, during and after the period of her complaint against MacFarland. They also recorded the session even though Ehekircher was not accompanied by her own legal representation. Ehekircher and her lawyer have so far not been able to get SafeSport to provide them with a copy of the audio.

Dan Hill, the U.S. Center for SafeSport's putative pro bono PR guy, gave us this statement: "We do not comment on active matters, even when factually inaccurate information is disseminated by parties on either side. Our approach is based on best practices, which includes caring more about professional fairness and the integrity of the process, than responding to misrepresentations. We are here to serve athletes through championing respect and ending abuse in sport."

ECW Press has published the third and “ultimate historical edition” of Irvin Muchnick’s 2009 book “Chris & Nancy: The True Story of the Benoit Murder-Suicide and Pro Wrestling’s Cocktail of Death.”