One conservative pundit called the bombers "heroes," while others laughed 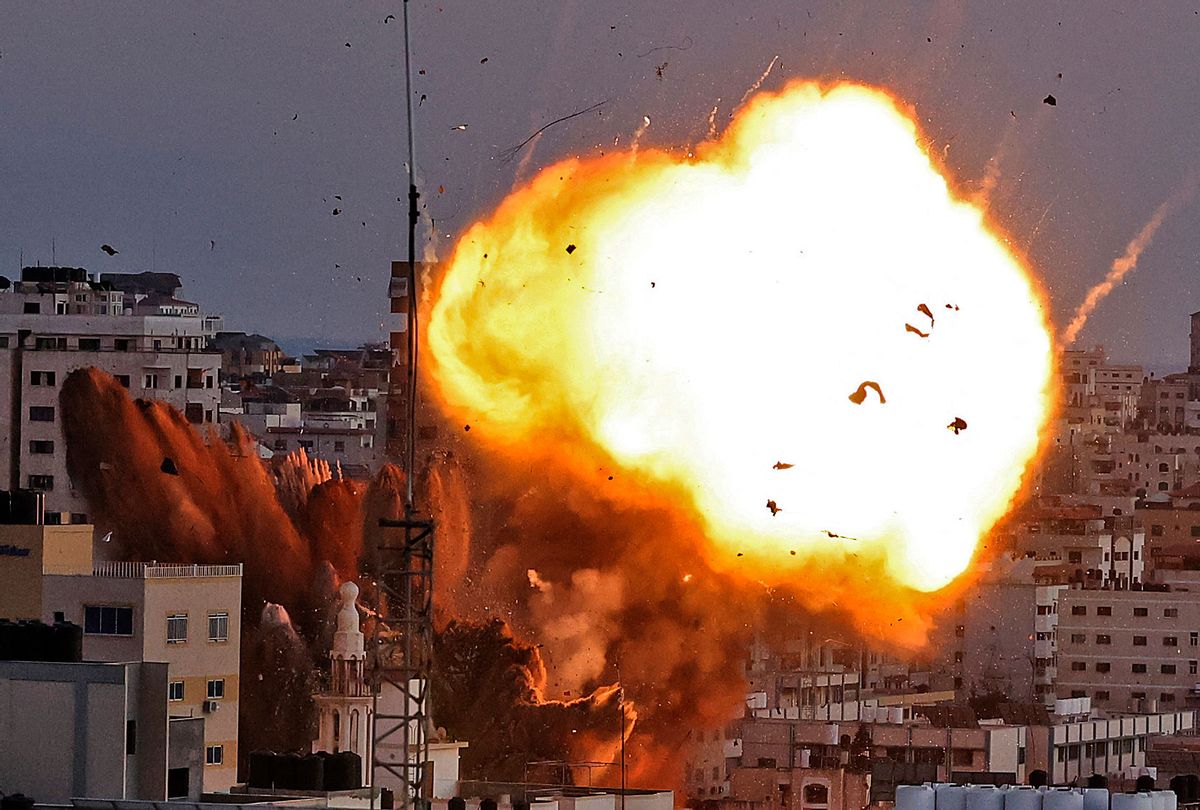 Smoke billows after an Israeli airstrike on Gaza City targeted the Ansar compound, linked to the Hamas movement, in the Gaza Strip on May 14, 2021. - Israel pounded Gaza and deployed extra troops to the border as Palestinians fired barrages of rockets back, with the death toll in the enclave on the fourth day of conflict climbing to over 100. (MAHMUD HAMS/AFP via Getty Images)
--

The Israel Defense Forces later said the militant group Hamas had "military intelligence assets" in the building — though as of Sunday afternoon no evidence supporting the claims had been made public.

The bombing, broadcast live television by several journalists who had just escaped the blast, quickly gained widespread media attention Saturday due to the nature of the attack, which drew condemnation from many press freedom advocates around the globe.

Yet, right-wing pundits on Twitter had a different view on it all — they celebrated and jeered at the destruction.

Senior columnist at the right-wing site Townhall, Kurt Schlichter, called those who carried out the bombing "heroes," while seemingly finding pleasure in the attack. "Let's stop pretending that the media is not a participant and that it is somehow entitled to not be treated like every other active enemy," he declared.

Let's stop pretending that the media is not a participant and that it is somehow entitled to not be treated like every other active enemy.

Popular conservative Twitter pundit, Stephen L. Miller, who is currently a contributor at the conservative opinion site The Spectator, reacted by mocking the bombing with a meme of a lady smiling.

Former Newsmax TV host John Cardillo wrote on Twitter: "Looks like the IDF took out Hamas's PR team," while fellow right-wing Twitter pal David Reaboi called the bombing "based," a term coined by the rapper Lil B to signal that one agrees or approves of a statement.

Probably watched this a dozen times already, what a great start to the weekend

No journalists were reported injured as a result of the airstrike. According to several firsthand reports from inside the building, residents and workers were warned ahead of time that the bombing would occur, sparking a mad scramble to evacuate the premises.

"I have been covering lots of events from this building. We have lots of good memories with our colleagues," Safwat al-Kahlout, a reporter for Al Jazeera, said. "Now everything, in two seconds, just vanished."

The AP reports at least 188 Palestinians were killed this week in the most recent round of fighting between Israel and Hamas militants in the Gaza Strip. That number includes 55 children and 33 women, with more than a thousand wounded. Eight people in Israel have died from rocket attacks launched from Gaza.