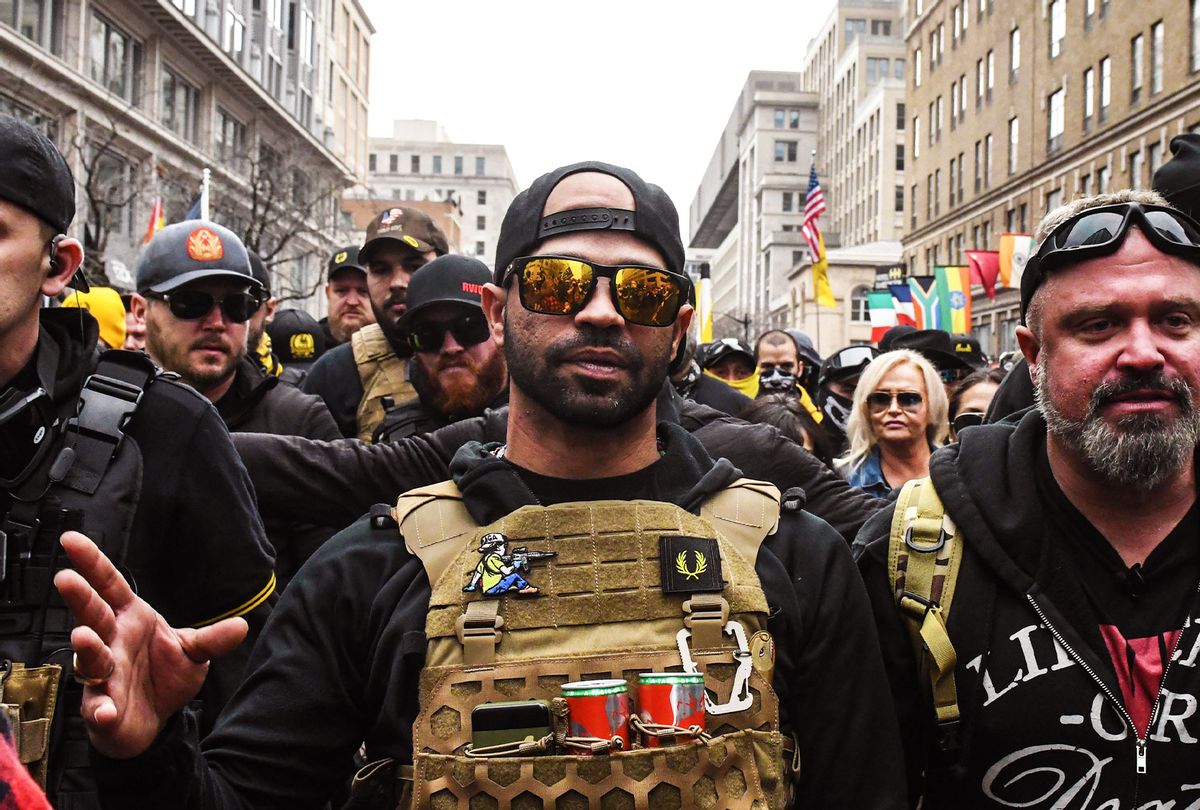 Enrique Tarrio, leader of the Proud Boys (L) and Joe Biggs (R) gather outside of Harry's bar during a protest on December 12, 2020 in Washington, DC. (Stephanie Keith/Getty Images)
--

A leader of the Proud Boys, a far-right gang that played an outsized role in orchestrating the Capitol riot, reportedly obtained north of $15,000 in paycheck protection program loans just this year.

The Guardian first reported that Enrique Tarrio, a chairman of the group, was allotted two $7,750 loans respectively on March 30 and April 16. According to records obtained by ProPublica, Tarrio is classified as an independent contractor working in "Security Systems Services." Tarrio is shown as the officer of several defunct LLCs including "SPIE Security LLC," "Fund The West LLC," and "Proud Boys LLC".

During his 2020 congressional bid in Florida's 27th congressional district, Tarrio claimed to be the proprietor of "several companies that were involved in the surveillance and security industry." However, Florida records did not indicate that Tarrio is a licensed security officer.

Tarrio is also classified as the registered agent of "Warboys LLC," a company founded in July of last year but dissolved this year on April 7. Also listed as officers of Warboys LLC are Joe Biggs and Ethan Nordean, both of whom are facing conspiracy charges in connection to the Capitol riot.

According to Penn Live, Warboys LLC reportedly shared the same address as another company known as "Proudboys LLC," for which Tarrio was listed as both the agent and manager.

Back in January, Salon detailed Tarrio's string of failures in business and politics. It appears that the vast majority of businesses Tarrio has founded are no longer active. In February, Tarrio ran to represent Florida's 27th congressional district, but failed to make the ballot. Florida records appear to indicate that Tarrio, now 39, legally resides with his mother in Miami, where he operates a business known as "1776 Merchandise," which runs the 1776 Shop, an ecommerce store that sells far-right merchandise.

Back in 2014, Tarrio was arrested and convicted of stealing and reselling diabetes strip tests from Abbott Labs – a crime which earned him sixteen months in federal prison. Tarrio still has yet to pay the company $1.2 million in restitution.

In late December, prosecutors allege, Tarrio announced the creation of the Ministry of Self Defense, a special chapter within the organization. calling it the Ministry of Self Defense. At least four men from the group have been charged with conspiracy in the Capitol siege, NBC News reported. On January 4, just before the Capitol riot, Tarrio was arrested for vandalizing a Black church and possessing a high capacity feeding device. Tarrio was later barred from entering Washington, D.C., which prevented him from participating in the storming of the Capitol.

The PPP loan program was first implemented under the Trump administration last year as part of the Coronavirus Aid, Relief, and Economic Security Act (CARES Act) to help businesses and stay afloat during the pandemic. In January, Biden expanded the program for a second round, allowing business to apply for more funding until May 31. However, according to CNBC, millions of borrowers have missed out on the opportunity to apply for a second loan because the program ran out of funding during the first week of May.

While the PPP program has been a lifeline for several needy businesses during the COVID crisis, it has also been subject of widespread criticism amid revelations that big businesses – as well as high-net worth politicians – took in loans while many smaller businesses couldn't qualify.