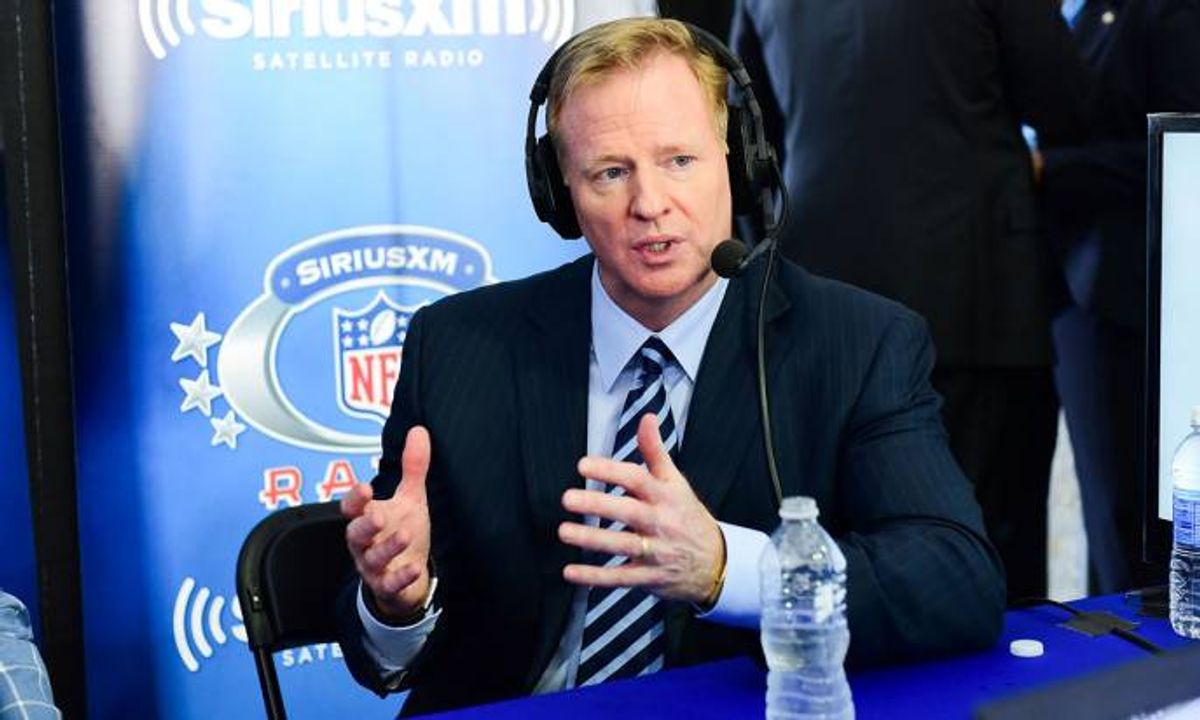 The National Football League is coming under increased scrutiny for using racially discriminatory criteria to evaluate former players for neurocognitive impairments, a practice that critics say has enabled the league to deny compensation to Black retirees who might otherwise be entitled to payouts under a billion-dollar concussion settlement approved in 2015.

Jenkins was referring to the NFL's decision to use different scales to interpret cognitive functioning among Black and white ex-players. To determine eligibility for payouts worth between $27,000 and $5.3 million, the league has reportedly encouraged doctors to "adjust" for race by comparing an individual's neurocognitive test results to a statistical benchmark based on population averages among racial groups.

Because the benchmark for Black retired players has been set at a lower threshold, they must demonstrate more significant neurocognitive impairment to qualify for benefits, leading some to describe the NFL's practice as a "resurgence of racialized medicine" that allows the league to "ban[k] on biological racism."

The NFL claims that so-called "race-norming" prevents false dementia diagnoses in healthy ex-players, but critics say the practice makes it easier for the NFL to deny Black retired players from accessing financial recompense for brain injuries sustained during their time on the gridiron.

Philip Gasquoine, a neuropsychology professor at the University of Texas Rio Grande Valley, told The Hill on Friday that if a Black player gets "exactly the same score on the test as the white player, because it was estimated that the pre-existing score was lower, they've got less chance of being diagnosed with dementia, and so they don't get the compensation."

While Jenkins is not suffering from dementia or other neurocognitive impairments stemming from head traumas experienced during his NFL career, he is an advocate for the hundreds if not thousands of retirees who have been deemed ineligible for payouts as a result of racist assumptions about the mental capacities of Black people.

Brody, who presided over the concussion settlement and approved the use of race-based benchmarks to evaluate brain injury-related claims, picked attorney Christopher Seeger as lead counsel for roughly 20,000 ex-players in the class-action suit against the NFL. The petition asks Brody to choose a new attorney to represent the retirees and demands equal treatment.

In March, however, Brody dismissed legal actions filed last August by Kevin Henry, a defensive end for eight seasons, and Najeh Davenport, who spent seven years in the league as a running back. The two Black former players—both of whom say they suffer from neurocognitive impairments after enduring multiple concussions during their careers—have appealed Brody's ruling.

When Henry and Davenport filed their lawsuit almost nine months ago, the pair accused the NFL of "explicitly and deliberately" discriminating against Black athletes by evaluating their neurocognitive exam scores through the lens of racial averages, as the New York Times explained at the time.

"When Davenport took a neurological exam in 2019, an NFL-approved doctor found that his use of language and his executive functioning—or ability to manage and regulate his mental processes—were diminished enough to qualify for compensation," the Times reported. "The doctor did not apply the special scale used to test Black players. Davenport received a letter that confirmed he was eligible for a payout."

The NFL, however, "appealed the award and said that when Davenport's scores were recalculated accounting for his race—something the league called an 'industry standard'—Davenport was not impaired in any category, and ineligible for a payout," the newspaper noted.

Something similar happened to Henry, The Hill reported Friday: "An NFL-approved clinician initially found that he qualified for mild to moderate dementia, but his claim was nonetheless denied. A second clinician, after adjusting his raw scores using a 'full demographic model... which includes age, education, race/ethnicity and gender,' found he did not qualify as impaired under the settlement."

As the news outlet noted, "Henry said it's painful to watch the NFL portray itself as a social justice ally while denying him compensation for what he and his wife, Pamela, say is clear impairment."

"They come out with all these slogans like 'We care' and 'Black Lives Matter,'" said Henry. "And I'm sitting there, like, you're lying."

Brian McCarthy, a spokesperson for the NFL, told The Hill that "the number of players potentially affected by the use of race-based normative adjustments is a fraction of what has been alleged." He did not respond, however, when asked to "substantiate that claim with data showing a breakdown of settlement awards by race."

According to the Times, "It is unclear what percentage of Black players have had their dementia claims denied compared to white ex-players because the settlement administrator does not publish data on the race of applicants." Henry and Davenport's legal team, however, said that "a majority of the 20,000 or so retirees are Black. About two-thirds of the roughly 3,000 claims submitted by all ex-players have been for dementia, and about three-quarters of those claims have been denied."

The Hill reported that "an analysis by one neuropsychologist, acting at the request of a lawyer involved in a lawsuit against the NFL, found that around three times more Black former players would have qualified for compensation if race norms were removed."

In their lawsuit, Henry and Davenport requested that the league stop using race-based benchmarks to evaluate former players' claims, and they also asked that "the scores on Black players' neurocognitive exams be recalculated using 'race-neutral' scales that would put them on an even footing with white players," the Times noted at the time.

The NFL, for its part, "called the lawsuit 'entirely misguided' and said the settlement 'always contemplated the use of recognized statistical techniques to account for demographic differences such as age, education, and race,'" the Times reported. The league's statement goes on to say that "the point of such adjustments—in contrast to the complaint's claims—is to seek to ensure that individuals are treated fairly and compared against comparable groups."

Doctors are not required to use any particular adjustments, the league says. But as the stories of Henry and Davenport make clear, the NFL has appealed cases in which Black players qualified for compensation but did not have their test results measured against the average score for African Americans in general.

In an essay published just ahead of the Super Bowl, Roberto Aspholm, an assistant professor of social work at the University of St. Thomas, and Cedric Johnson, an associate professor of African American Studies and Political Science at the University of Illinois at Chicago, argued that "racial difference does not produce the allegedly lower average levels of cognitive functioning among African Americans today—though the medical practice of treating race as an independent variable in analyzing neurocognitive scores reinforces this gravely misguided and dangerous notion."

As the pair explained:

The NFL's statement that the scoring of neurocognitive test results includes adjustments for other factors like "education" hints at the real source of any potential scoring differentials across racial groups. In general, neurocognitive development and functioning are dynamic processes shaped by environmental and life course factors. Since African Americans are more likely than whites and other groups not only to receive substandard education, but also to be exposed to environmental toxins, receive inadequate medical care, and suffer from the trauma of living in neighborhoods with high levels of violence, among other adverse experiences, it follows that the most submerged and dispossessed blacks might be more likely to have lower average levels of neurocognitive functioning. But it should be recognized that, to whatever extent such patterns may exist, they are produced not by any ostensible racial difference, but by patterns of exposure to particular conditions and experiences.

"The NFL's apparent use of race-based criteria for denying access to settlement compensation is a textbook example of the way that the ideology of race is designed to work in society," wrote Aspholm and Johnson. "Throughout U.S. history, racism has not constituted an end in itself, but rather a means to an end."

"The aim of using racially adjusted metrics for neurocognitive test scoring is not to reinforce racism or white supremacy," the scholars argued. "Rather, it is to deny players access to compensation to which they might otherwise be entitled and for which NFL owners would pay; racism, then, is the means through which owners are pursuing this economic end."

With the ideology of race being deployed to "justify the denial of rights... based on socially constructed notions of natural difference," the scholars emphasized the need for "broad player solidarity, rooted in both a vociferous rejection of biological notions of racial difference as well as a clear-eyed commitment to challenging the exploitation of players at the hands of ownership."

The issue has gained the attention of at least one member of Congress.

Keith Chu, an aide for Sen. Ron Wyden (D-Ore.), chairman of the Senate Finance Committee, told The Hill on Friday that the lawmaker "is committed not only to ensuring the NFL stops using the race-based formula going forward, but also to ensuring any player previously denied benefits, or who chose not to apply because of the formula, is notified and given the opportunity to retest in order to get the benefits they deserve."