"The Dry" is a desolate, engrossing mystery in which everyone – even Eric Bana – is guilty

Set in the parched outback of Australia, this investigation into a murder-suicide reveals a town's seamy underbelly 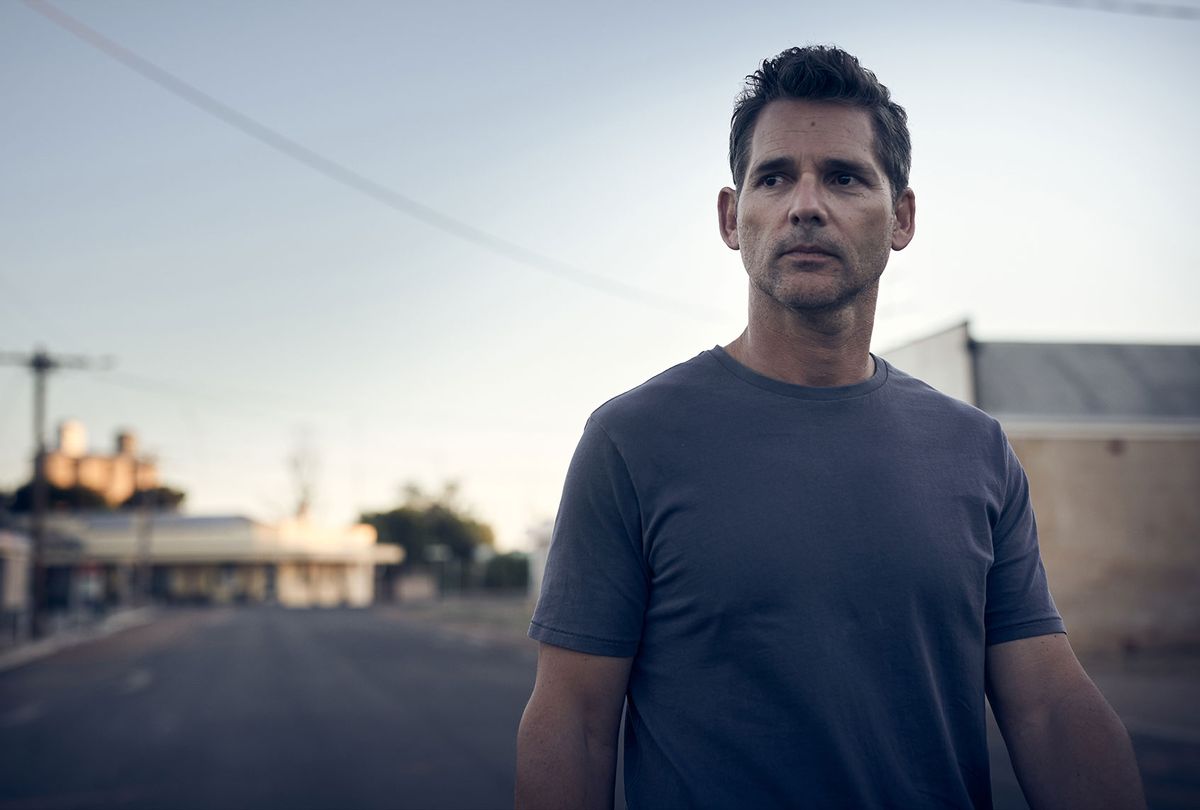 The parched outback of Kiewarra, Australia is the setting for the involving, atmospheric mystery, "The Dry," based on Jane Harper's best-selling novel. The area has not had rain in nearly a year (brush fires are a big concern) when Aaron Falk (Eric Bana) arrives for a funeral. The dead man is his friend from two decades ago, Luke (Martin Dingle Wall), who apparently murdered his wife Karen (Rosanna Lockhart) and son Billy (Jarvis Mitchell) in their home, leaving his baby, Charlotte, alive before heading off to a dried-up lake to take his own life.

The murder-suicide theory, however, does not hold water with Luke's parents, Barb (Julia Blake) and Gerry (Bruce Spence). They ask Aaron, who is now a member of the Australian Federal Police in Melbourne, to investigate. Aaron teams up with the local cop, Raco (Keir O'Donnell) and starts digging into the case, looking into Luke's finances, and questioning folks in this small town, such as Luke's neighbor, Jamie (James Frecheville, of "Animal Kingdom"), Scott Whitlam (John Polson), who runs the school where Karen worked, the local doctor (Daniel Frederiksen), and others. He also interrogates some acquaintances from his past, including the hothead Grant Dow (Matt Nable), and the kindly Gretchen (Genevieve O'Reilly).

Twenty years ago, when they were teens, Aaron (Joe Klocek) was close with Gretchen (Claude Scott-Mitchell), as he and Luke (Sam Corlett) were friendly with her and Ellie (BeBe Bettencourt). However, when Ellie was found dead in the local river, Aaron and Luke were suspects. Moreover, it is believed that the boys lied about their whereabouts on the day of her death. The unsolved mystery haunts Aaron, as well as the town. Grant, and Grant's father, Mal (William Zappa) still hold a grudge against Aaron, and do not welcome him on his return to Kiewarra.

Director/co-writer Robert Connelly clearly lays out all this history and defines each character so viewers immersed in "The Dry" can follow the stories as the film toggles back and forth between the past and the present. There is a suggestion that there could be a link between the two crimes. Was Luke capable of killing his family? And was he involved in Ellie's death?

"The Dry" takes this juicy setup and uses it to examine the seamy underbelly of this small farming community. The characters are all as desolate as the land, and Bana cuts an imposing figure as he observes the townsfolk, deducing their secrets that could incriminate them. The film is a solid whodunnit, and viewers may — or may not — pick up some of the clues as the investigation unfolds. Aaron is a shrewd detective, and his perceptive observations assist him well. That said, while a casual remark leads to a big reveal, it is hard not to scoff as several leads drop almost effortlessly into his lap.

Even as Aaron encounters the expected red herrings and misdirection — thankfully, the film resists some genre clichés, such as Aaron being knocked unconscious by someone wanting him to stop snooping — the film does not build its tension inexorably. Despite the power of the drama, there are only a few suspenseful moments.

Connelly's film is as much a character study as it is a mystery. "The Dry" is a narrative of return, with Aaron's actions triggered by his memories. When Jamie says he was off shooting rabbits when Luke was killed, it is the same alibi he and Luke used for their whereabouts at the time of Ellie's death. Is Jamie trolling him? Likewise, does Aaron have an ulterior motive for sleuthing, as some folks suspect? He certainly seems spooked when he is harassed by the locals and becomes the target of a smear campaign.

It is not presumptuous to believe Aaron became a Federal cop because he was suspected of a crime as a youth, but the film never makes that connection explicit. That said, everyone in "The Dry" is guilty of something. Money, of course, is a concern in the area's dying economy, but are factors like jealousy, or revenge at play? It is best to left for viewers to discover.

Nevertheless, Aaron's instincts about Luke's murder-suicide case might be a chance for him to settle old scores and perhaps even uncover the elusive truth about Ellie's death. This is his shot at redemption, and Aaron feels tremendous pressure to solve the case and free himself from his troubled past.

As such, Aaron is always quietly seething inside. Bana's gripping performance is largely internal, allowing him to express his real thoughts in just a glance, or his body language, sitting on his hotel room bed, processing the past and present. The actor generally maintains a cool, confident presence throughout "The Dry." It is amusing when Raco's wife, Rita (Miranda Tapsell) jokes about the man-crush her husband has on Aaron. And yet, Aaron's need to figure out the truth at any cost drives him to confront something that is quite painful. Bana makes that difficulty palpable. As he and Gretchen reconnect as adults, they initially try to resist their desire for one another. They are way too bound up in the past, with Gretchen likely sublimating her attraction to Luke, and Aaron suppressing his once-budding relationship with Ellie.

This kind of knotty plotting, along with the strong sense of place, is what makes "The Dry" so compelling. The film was a big hit in its native Australia. It deserves the same success here.

"The Dry" opens in select theaters and on demand on May 21.