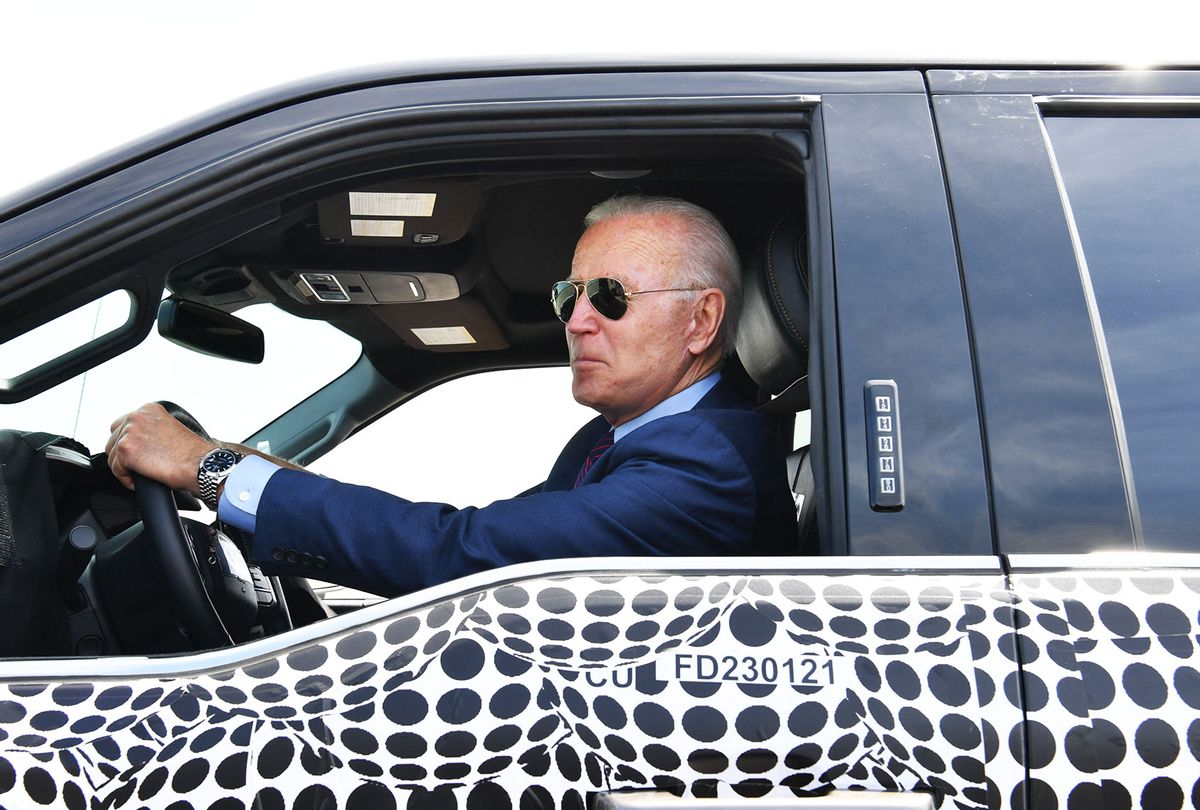 A pro-Trump blog stirred up a bizarre conspiracy theory Wednesday, claiming that President Joe Biden wasn't actually driving during a Tuesday event in which the 78-year-old took an electric truck for a spin in front of the press.

The claim originated on right-wing blog The Gateway Pundit, an outfit known for their rather sticky relationship with the facts. The publication claimed in a post that Biden was not diving but instead "pretending" to be behind the wheel of an electric Ford F-150 test truck during a visit to a Dearborn, Michigan Ford Motor Company plant.

"Biden made an unscheduled visit to a Ford driving course at which safety tests are normally conducted, and had the opportunity to test drive the new Ford F-150 Lightning -- the electric vehicle Ford is manufacturing at a plant in Dearborn, Michigan," CNN reported on Tuesday.

"This sucker's quick," Biden said after speeding around the race track to members of the press.

"Following his speech, the declining septuagenarian was put in an electric vehicle where he pretended to be driving," Hoft claimed. "This was all a show by his handlers to make Joe Biden look like he's in charge."

Hoft, who Media Matters for America describes as "a pro-Trump conspiracy theorist and hoaxer," went on to write that "Joe wasn't driving" before asserting, "it was all a stunt."

Checkin in with Gateway Pundit pic.twitter.com/ZeW8zn5vfD

By mid-afternoon Wednesday the article already been shared over 3,000 times on Facebook alone, according to SharedCount.com. The article continues to trend on social media platforms despite the clear falsehood — according to photos, video and eyewitness account from reporters Biden was clearly driving the vehicle, with two hands firmly on the wheel.

In October of 2018, Wohl posted a document to the site baselessly alleging then-Special Counsel Robert Mueller of sexually assaulting a non-existent woman. The website eventually walked back the claims (and suspended Wohl as a writer) after the article was thoroughly debunked.

"On Thursday, the Gateway Pundit suspended our relationship with Jacob," Hoft penned at the time. "We need to collect more information on this explosive situation. We are not afraid to take chances, as you well know, but we want to also be careful and accurate."

The site, which is monetized and relies on low-quality ad content, currently appears to have a mutually beneficial partnership with 2020 election fraud conspiracy theorist and MyPillow CEO Mike Lindell — hawking Lindell's products from dog beds to his company's namesake pillows.

"Now, Mike Lindell has teamed up and made available to Gateway Pundit readers a special discount code to use at MyPillow.com," reads a promoted post on The Gateway Pundit from mid-May.