It was a time too long in coming, but at long last we're no longer sleeping with the enemy 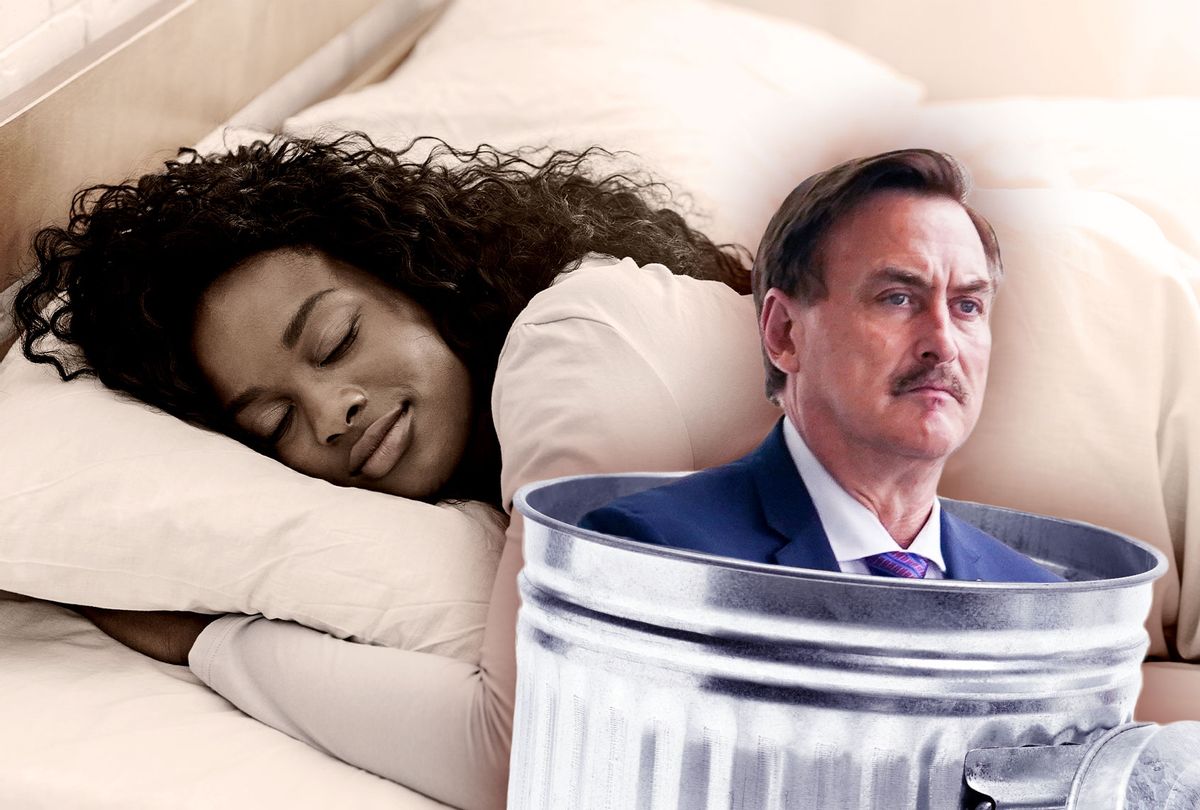 Thursday morning will forever be remembered as the first time in who knows how long that I woke up without neck pain, back pain and creaky joints. Untold millions may have awakened similarly refreshed, the result of a temporary relief that sanity has been restored to the White House and the nuclear football is no longer in the hands of an unpredictable madman.

But I credit this atypically sound night of sleep to an additional factor: I finally got a fascist nutcase out of my bed. In this respect I suppose my household may have something in common with Jane Krakowski.

According to a report in The Daily Mail, Krakowski secretly dated Mike Lindell, Donald Trump's weirdo bestie and inventor of the infamous MyPillow, for nine months. A statement from Krakowski's publicist to Page Six denies the story, stating, "Jane has never met Mr. Lindell. She is not and has never been in any relationship with him, romantic or otherwise." Lindell likewise denies the story, telling the Daily Beast he intends to sue the Daily Mail.

If the tale were true, at least she would have kept her alleged lapse in judgment brief. My husband and I have been resting our troubled heads on four MyPillows for the better part of a decade. Our only excuse is sheer laziness.

They were gifted to us by my mother-in-law, a devoted worshipper at the church of "As Seen on TV," who first introduced Lindell's bestselling products to us during a hometown visit. Thanks to her, our lives have been blessed with many direct-to-consumer-marketed devices over the years, including but not limited to: one Snuggie, the Clapper, and countless packages of ShamWows.

Usually she sneaks them in under elaborate Christmas wrapping. In this instance, she secretly replaced the old pillows on her guest room bed with a pair of MyPillows with all the wily verve of an instant coffee taste tester. If memory serves, she asked how we slept, and we must have responded "fine," because she sent us home insisting we take the two sacks of open-cell poly foam fill we slept on, and then shipped two more as presents later.

We didn't turn her down because our existing pillows were old and crappy, and here were four that perked right back up after a few cycles through the dryer.

Admittedly, for a long time we didn't think our MyPillows were bad, mostly because we barely thought about any of the pillows we purchased before we got these. They were also free, which is a main reason the devil's fun bags lasted in our home for as long as they did, despite the fact that they were yellowing and getting more flat and miserably irregular as time trudged on.

But then Lindell tried to hawk overthrowing the government with all the slickness and subtlety of Wile E. Coyote trying to tiptoe away from an amateurish trap only to have it snap on his ankle, triggering an anvil to drop on his head. Following the elections he loudly peddled lies about widespread voting fraud involving Dominion machines; in response Dominion fluffed up a legal letter warning of pending litigation.

Lindell also funded buses to the Jan. 6 attempted insurrection in Washington D.C. And after it went over about as well as a post-taco Tuesday Dutch oven, he popped up at the White House with notions of convincing former president Donald Trump to invoke the Insurrection Act and declare martial law.

At long last I looked at the offending nap cushions, turned to my husband and said, "I'm sorry, but we really need to get rid of these."

"I was thinking the same thing," he grimly muttered.

Could I have sauntered over to some big box store and picked from the replacement options there? Of course. Instead, for the first time in my life I decided to research my purchase instead of throwing my money at some down-stuffed floozy that would eventually make my life worse. More than this, I wanted some level of assurance that the manufacturer wasn't a complete kook. In other words, I decided to treat my pillow selection with more or less the same level of vetting I'd give the people I vote for, with the difference being I intended to sleep with it.

At the time we acquired our MyPillows neither my mother-in-law nor my husband nor I — nor, I suspect, most of America — had a clue as to the extent of Lindell's depravity. Back then — "then" probably being around 2013 or 2014 — Lindell was mainly known to insomniacs and convenience enthusiasts.

We placed him in the same category as Billy Mays, Ron Popeil and Vince Offer — fast-talking late night hucksters pushing products of variable usefulness. This one, promoted as "The Most Comfortable Pillow You'll Ever Own!" led Lindell to call himself a "sleep expert" and tout his American-made pillows as the solution to chronic neck and back pain, sleep apnea and an assortment of other bodily nags, ailments and chronic diseases.

These claims would eventually make him the subject of many lawsuits.

Anyway, even after Lindell started popping up next to the game-show host-turned-feckless authoritarian, even after he tried to sell poison as a snake oil COVID cure, we nervously assured ourselves that the money that funded our pillows was spent long ago and not by us.

This time the decision I made would be completely on me, so I decided to consult consumer evaluation lists and poke around a few "about us" sections on the recommended companies' sites. I cannot claim this to be anywhere close to a scientific method or on the same level as an investigative report. The only thing I knew is that I wanted those lumpy crimes out of my home, and I didn't want to trade them for a product supporting a company that might be as bad as Lindell, or possibly worse but smarter because they remained quiet about it.

Here's the sad, honest truth: If Lindell hadn't loudly participated in multiple assaults on America's people and its democracy over the course of 2020, it's highly likely I would still be sleeping with the enemy. I am not proud of this.

Since I spent most of 2020 trying to ignore that crackbrain, several of his other abhorrent acts escaped my notice, including his assistance in bailing out Kyle Rittenhouse, the 17-year-old charged with gunning down two people in Kenosha, Wisconsin who were protesting the police shooting of Jacob Blake. Yes, I know. I should have trashed the pillows then.

Let he or she who has never quenched their thirst with a Coca-Cola or a Fanta; used IBM products; quoted Coco Chanel or treated their illness with a drug manufactured by Bayer cast the first stone.

But capitalism follows some version of the comedy equation of "tragedy plus time" when it comes to persuading the masses to forget details like Nazi collaboration. Lindell's walrus-mustached face is up in our collective business right now, and at long last some companies are de-platforming him in the same way tech companies banished his messiah.

Bed Bath & Beyond, Kohl's, H-E-B and Wayfair have all dumped Lindell's products; Krakowski (if she had even met him in the first place) allegedly cut him loose last summer, and following a brief search for new bedding options so have I.

I'm also glad to have taken a bit of time really considering my purchase, because as it turns out, quality pillows aren't cheap, and some brands may not necessarily align with my viewpoints any better than Lindell does.

Take the company that opens its mission statement with, "In 1793, Eli Whitney invented the cotton gin and changed the world forever by revolutionizing the way cotton fabrics and linens were manufactured."

That's true. It also skips the inconvenient part about that revolutionary manufacturing accelerating the growth of slavery in the American South and being a contributing factor to the Civil War. That this is the guy the company honors in its name is telling.

There's also the recommended manufacturer that appropriates its name from Hindu philosophy but whose leadership team is mostly white and male. The company also raises money for local non-profits and outwardly states its devotion to sustainable practices, and that's nice. But the endorsed pillow in question was $145, and it wouldn't arrive until well into February.

Eventually I went with a budget-friendlier option from a family-owned company that describes itself as "competing against some big players, but we're determined to succeed by putting our customers and product quality first." I had no idea how hard it is out in these streets for independent bedding manufacturers.

There was also mention of loving their office dog and eating pastries, and at no point did I come across any evidence of its founder saying anything akin to "Hail Hydra!"

I bought two of their $60 side-sleeper pillows, and they arrived the next day. They also puff up nicely in my dryer, and once I settled into bed I was thrilled to realize how dreamy it was to rest my head on something that didn't feel like I was mashing my cheek into a bag of dry beans.

Sleeplessness became a chronic condition for untold millions during the 45th president's anxiety-provoking administration, so I suspect the situational relief of knowing that man is out of the Oval Office deserves as much credit as my new purchase's superiority. But the fact that I woke up pain-free for the first time in ages indicated that, in fact, I had never owned a good pillow that fit my needs.

Usually an item is just an item. Sometimes, though, it's a metaphor for larger woes born of low expectations, for settling for less, if not the least, because attempting to make things better takes effort and energy we simply don't have.

I don't believe it's a coincidence that midway through 2020, no number of passes through the dryer made those MyPillows comfortable enough get me through the night. Maybe we put up with them because in the midst of such darkness it didn't occur to us that there were better options within our reach, because they didn't hurt us too terribly, because it was simpler to keep on living with them.

Now that we know better and have better, perhaps we can sleep a little easier for a little while.

This story has been updated to reflect both Lindell's and Krakowski's denials of the Daily Mail dating story.