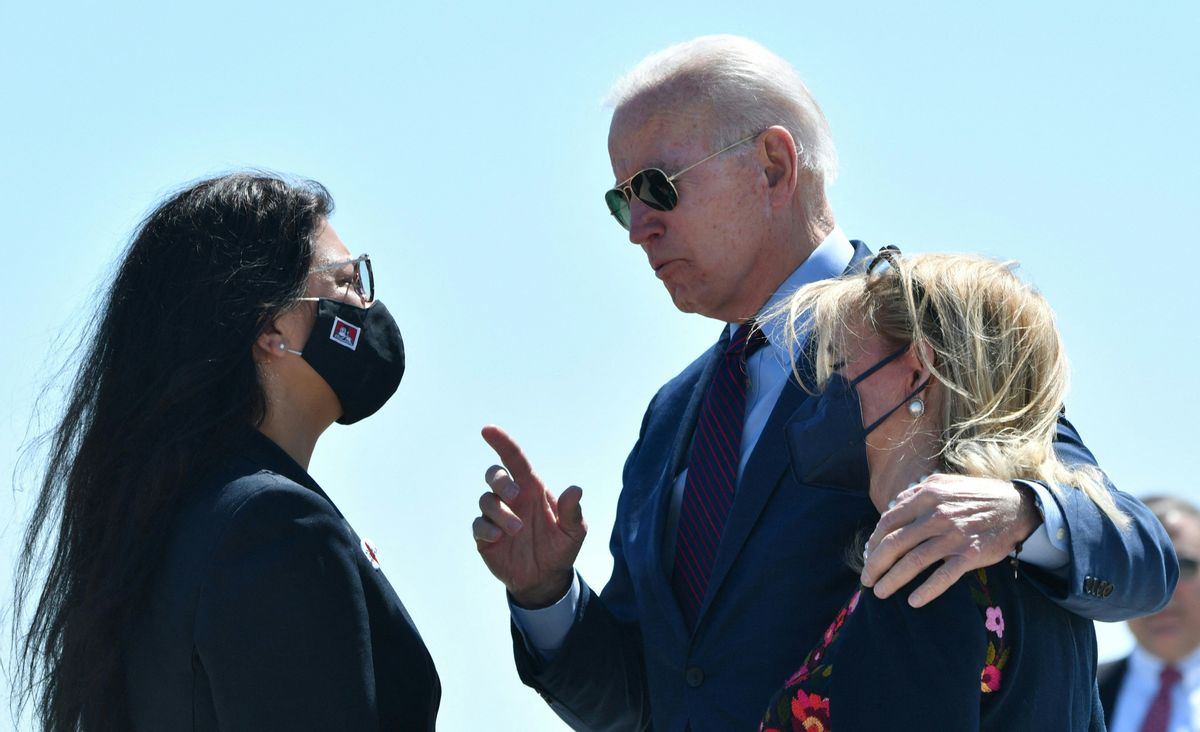 Rep. Rashida Tlaib of Michigan, the first woman of Palestinian descent to serve in Congress, directly confronted President Joe Biden on Tuesday over his unwavering support for a right-wing Israeli government that continues to massacre civilians in the occupied Gaza Strip—in some cases using U.S.-made bombs and aircraft.

When Biden arrived in Detroit for an event Tuesday, Tlaib greeted the president on an airport tarmac and—according to an aide—expressed that "Palestinian human rights are not a bargaining chip and must be protected, not negotiated."

"The U.S. cannot continue to give the right-wing [Israeli Prime Minister Benjamin] Netanyahu government billions each year to commit crimes against Palestinians," Tlaib said during the brief exchange, which was captured only in photographs. "Atrocities like bombing schools cannot be tolerated, much less conducted with U.S.-supplied weapons."

The Michigan Democrat also told the president that "the status quo is enabling more killing, that the current U.S. approach of unconditional support for the Israeli government is not working, and that the White House must do far more to protect Palestinian lives, dignity, and human rights," Tlaib's aide said.

While it is not clear what Biden said in response to Tlaib's remarks on the tarmac, the president praised the Michigan congresswoman during a speech at a Ford Factory in Dearborn.

"I admire your intellect, I admire your passion, and I admire your concern for so many other people," Biden said. "From my heart, I pray that your grandmom and family are well. I promise you, I'll do everything to see that they are."

Tlaib is among the group of progressive lawmakers that has vocally criticized Biden's inaction as the Israeli government—with the diplomatic and military support of the U.S.—has killed more than 200 Palestinians in Gaza, leveled residential buildings, bombed the besieged territory's medical facilities, and attacked the offices of local and international media outlets.

Throughout the onslaught, the president has defended the Israeli government's actions as reasonably proportionate and categorized the devastating bombing campaign in Gaza as "self-defense."

In response to Biden's belated endorsement of a cease-fire during a call with Netanyahu on Monday, Tlaib tweeted, "If you support a cease-fire, then get out of the way of the U.N. Security Council and join other countries in demanding it."

"Apartheid-in-chief Netanyahu will not listen to anyone asking nicely," Tlaib added. "He commits war crimes and openly violates international law."

Tlaib has also slammed the Biden administration's attempt to greenlight a $735 million weapons sale to Israel amid the country's bombardment of Gaza, an assault that has killed dozens of Palestinian children and displaced tens of thousands of people.

Early Wednesday, as the Associated Press reported, Israeli airstrikes "killed at least six people across the Gaza Strip and destroyed the home of an extended family."

Rep. Pramila Jayapal (D-Wash.), chair of the Congressional Progressive Caucus, echoed that sentiment in a statement late Tuesday, warning that the sale's "timing and significance threaten to undermine U.S. diplomacy to secure an immediate end to this violence."

"In light of disproportionate Israeli bombings that have destroyed the Associated Press offices, targeted a refugee camp, and damaged a Doctors Without Borders clinic," said Jayapal, "I am deeply concerned by the message sent by a pending $735 billion U.S. weapons sale to Israel."

"Congress and the Biden administration should consider delaying this arms sale to carefully review whether transferring these precision-guided missiles at this moment is consistent with protecting human rights, achieving an immediate cease-fire, and is in accordance with the Arms Export Control Act, which only allows such weapons transfers for legitimate defense and prohibits their use to escalate conflict," Jayapal added.