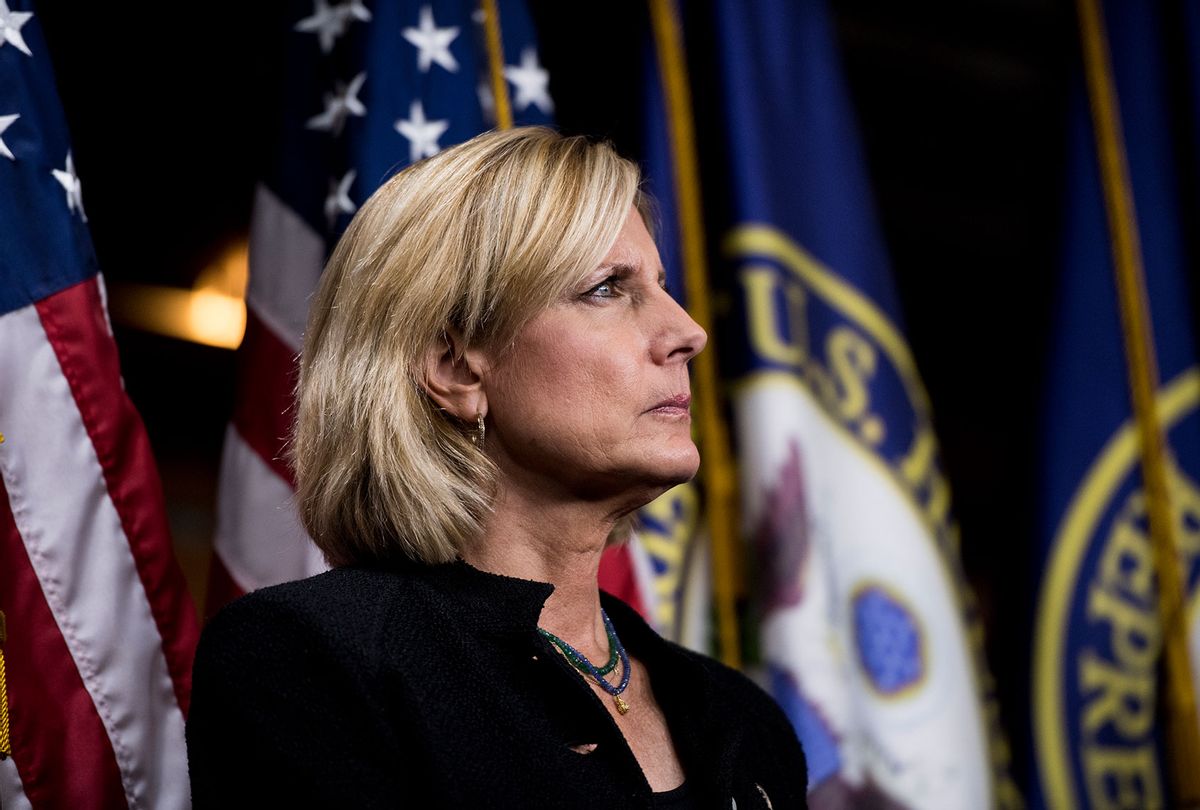 While Republicans across the country are trying to crack down on ballot access, Democrats are pushing to reform the state's arcane election rules after thousands of voters were disenfranchised in the 2020 election for showing up at the wrong polling place, which may well have cost the party a House seat in a largely blue state.

More than 13,800 ballots in New York were rejected last November because voters showed up at the wrong location, according to data from voting advocacy nonprofit Vote Early NY. State law requires poll workers to send registered voters to their correct polling site, but these voters were told to fill out affidavit ballots instead, all of which were rejected.

That rule may have cost the Democrats a House seat in the state's 22nd congressional district, which includes all or part of eight largely rural counties in central New York, and the population centers of Binghamton and Utica. Republican Claudia Tenney defeated incumbent Democrat Anthony Brindisi last year by 109 votes out of 320,000 ballots cast in one of the most expensive races in the country. The close finish between Tenney and Brindisi — who had unseated her just two years earlier in another razor-tight contest — prompted a months-long legal battle before a judge ruled in January that 128 disqualified ballots cited in hearings could not be counted under the law, even if those voters were legally registered. Data from Vote Early NY shows that the number of affected votes was actually closer to 273, which might have been enough to swing the race.

It's impossible to know how those votes would have gone, as Jarret Berg, an election attorney and founder of Vote Early NY, said in an interview with Salon. But "the margin of just this group of ballots that were thrown out," he noted, "was larger than the certified total between the candidates."

State Supreme Court Justice Scott Del Conte said in his ruling that the ballots must be disqualified under state law, but criticized local election boards for "systemic violations of state and federal election law," citing another issue in Oneida County (which is within the 22nd district) where election officials had disenfranchised 2,400 people by failing to process their voter registrations in time for the election.

"We knew this was an issue but this is the first year we were able to get a complete snapshot of just how big this problem is in our state," said Berg. "To be honest, it was much bigger than I would have even imagined."

Some states like nearby New Jersey and Massachusetts have so-called "ballot-saving" statutes that allow votes for statewide and congressional races to be counted if a registered voter casts a ballot at the wrong polling location but in the correct county.

New York's state Senate this week approved a bill that would likewise require votes cast in incorrect polling places to be counted whenever possible, as long as voters cast them in the county where they are registered, though it is still pending in the state Assembly.

"While other states around the U.S. are working overtime to restrict voting rights, here in New York we're taking the opposite approach: the law should stand, as much as possible, on the side of voters looking to make their voices heard," Senate Elections Committee Chairman Zellnor Myrie, a Brooklyn Democrat and the bill's sponsor, said in a statement to Salon. "Allowing an eligible voter to cast ballots in an election where they are otherwise qualified to do so, even if they show up to the wrong school cafeteria on Election Day, is a step toward protecting the rights of all voters."

Assemblyman Robert Carroll, anothert Brooklyn Democrat who is sponsoring the legislation in the Assembly, said in an interview with Salon that the bill aims to "correct an ill that I see as both a former practicing election lawyer and just as somebody who is an elected official and somebody who has been involved in New York state politics for a long time."

The current rules are "unfair to the voter" and are "really an inadvertent way of suppressing what are otherwise valid votes," he said, adding that "in a place like New York City, oftentimes folks live across the street from a polling place that isn't their own or have to walk past the polling place that otherwise could be their polling place. So there's lot of confusion."

Brindisi is backing the change after criticizing the violations that may have cost him the seat. "Out of 320,000 ballots cast, I lost by 109 votes," he told WPIX. "Losing by 109 votes is frustrating, but what was more frustrating for me is knowing there were hundreds of legally registered voters who cast their ballots, but who through no fault of their own never had their vote counted."

Tenney, who is now working with former President Donald Trump to push for voting reforms including voter ID and signature verification in response to his false claims about the election, did not respond to questions from Salon.

New York is one of the few states that provide no funding to its counties to run elections. Counties set their own rules for counting absentee and affidavit ballots after the November election, which can result in immense confusion.

"The thing that stood out to me is that we had eight counties in the district with eight different ways of doing things," Susan Lerner, executive director of Common Cause New York, told Syracuse.com. "There was no accountability whatsoever. As a voter, I want to make sure my vote is counted and not subject to the whims of what side of the county line I live on."

The issues that plagued the election prompted a federal investigation that found that Oneida County had improperly rejected hundreds of affidavit ballots and violated voter rights by failing to process at least 2,400 valid voter registration applications in time for the election. A Justice Department official notified the county in March that it would file a civil lawsuit over apparent violations that had disenfranchised voters. Federal and county officials are reportedly in settlement talks.

Oneida County's election commissioners resigned after blaming a lack of resources and issues that impacted elections across the board, including the pandemic and expanded absentee voting.

But "the resourcing can only explain so much about what those commissioners did," Berg said. "From our perspective, it illustrates the need to modernize and standardize how we run elections in New York. We can't have 58 boards of elections freelancing how we document absentee and affidavit challenges and objections."

Berg called for the state to create uniform standards that all boards must follow and to require training for commissioners and elections staff. He described the Oneida County case as a "civil rights violation at scale," and said it showed that voters "can do everything right and still be disenfranchised."

It also sparked a realization that "if you had shone a bright spotlight on any board's activities [in the state], you would find some kind of ugly stuff," he said. "One thing that should come out of that is some professionalization, where commissioners and top-level staffers should be required to take some standardized training. Right now, we really don't have much of that." In too many places, he said, election jobs are still handed out as patronage, just like in the old days of machine politics. "We should be looking at the quality of our local election administration and what should that look like in a modern world to make sure people's rights aren't infringed."

A new bill in the state Senate, S5800, would require mandatory uniform training for election commissioners and key staff, though it has yet to advance out of committee. But the state legislature has taken significant steps to address voting concerns in a state that has long been criticized for some of the nation's most ungainly election laws, advancing constitutional amendments that would enact both same-day voter registration and automatic voter registration through the DMV.

"Same-day voter registration, allowing voters to request absentee ballots without requiring an 'excuse,' and simplifying the timeline for receiving and returning absentee ballots are just a few of the important voting changes we're pushing in New York this year," Myrie said. "These build on our previously successful efforts to establish early voting, allow voters to correct technical errors with their ballot like a missing signature, and automatically restoring voting rights to people on parole. At a macro level, New York must pass a voting-rights act that would create a host of protections for voters and restore many of the safeguards eliminated when the Supreme Court invalidated portions of the federal VRA."

Carroll predicted that legislation to allow votes to be counted in the wrong precinct "would be a precursor to on-demand voting," which he described as the "gold standard of voting." In fact, that's already available in some parts of New York for early voting, when voters can go to centralized polling sites and have correct ballots printed rather than needing to vote in a specific precinct.

"You have to vote in your county, but we're going to give you real latitude of where it's easier for busy people to go," he said.

But at least some of New York's election woes are the result of more insidious problems in the way the state runs elections. Carroll said he supports a "large-scale overhaul" of the Board of Elections and other rules that are "vestiges of Tammany Hall," the corrupt political machine that dominated New York's government for nearly two centuries.

"There's things that create really weird outcomes that are very antiquated and Byzantine," he said. "Those are most obviously shown in the way we select our Supreme Court judges through party conventions," as well as "the way we go about our petitioning process and the partisan nature of the Board of Elections."

Berg called on the state to make voting more transparent, allowing ballots to be tracked online and ensuring that voters are afforded due process. He pointed to the case of a smudged ballot cited in the legal battle over New York's 22nd district. Tenney pushed to disqualify that ballot based on the bizarre argument that the smudge might have been blood, which could hypothetically have been used to identify the voter through a DNA test in violation of a person's right to a secret ballot.

"That kind of preposterous garbage is held up all the time in these close contests to void perfectly good ballots," Berg said. "We need to enshrine a counting principle, which is based on due process."

Another bill introduced by Myrie, S253, would require votes to be counted regardless of stray marks as long as the intent of the voter is unambiguous.

But the larger issue is that the current system allows candidates to object to ballots for any number of reasons, potentially disenfranchising voters in haphazard fashion.

"Those practices are a threat to people's rights and they should basically be whittled down to only good challenges," Berg said. "The voter should have some due process and the ability to respond before we throw those people's ballots out or put them before a judge who's not even going to talk to the voter," Berg said. "The person challenging it should swear under penalty of perjury that there's foul play. We have none of that right now."