Rich GOP senators like Ron Johnson, Rick Scott "are the ones with the most to lose," says liberal advocacy group 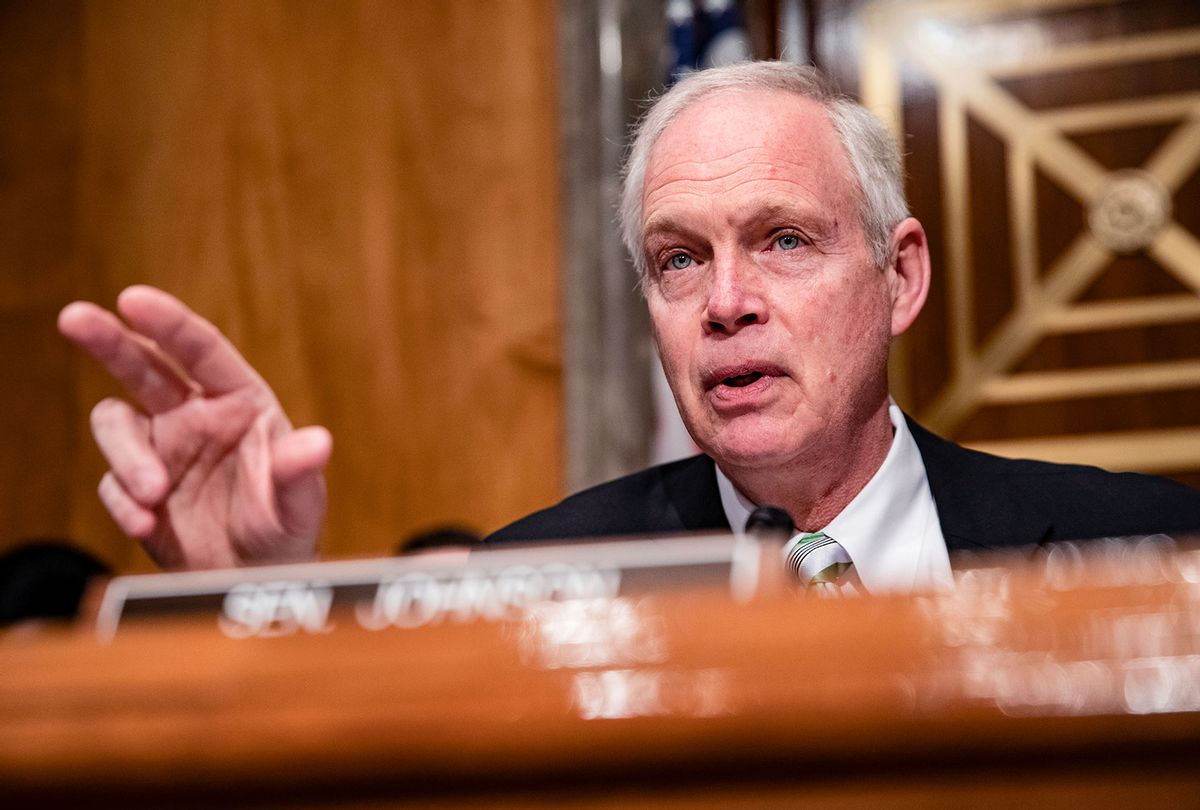 Some of the most outspoken Republican critics of President Joe Biden's American Families Plan could face a steep tax increase on their commercial real estate investments if Congress approves the $1.8 trillion proposal.

Biden's American Families and Jobs Plans would be partially funded by rolling back the 2017 Republican tax cuts, including a tax break for commercial real estate investors. Republicans have roundly opposed the proposals, with Senate Minority Leader Mitch McConnell, R-Ky., declaring that undoing any part of the 2017 tax cuts the GOP's "red line." Senate Republicans are instead pushing a much smaller standalone infrastructure proposal that would only provide $189 billion in new funding while replacing the proposed tax increases with user fees like gas and mileage taxes that would disproportionately be paid by workers.

Though Republicans have long opposed tax increases, their newfound appetite to shift the tax burden to the middle class has surprised some economists. Some of the biggest opponents of Biden's tax proposal would personally save hundreds of thousands in taxes if the plan is defeated, according to an analysis by Invest in America Action, a progressive advocacy group backing Biden's proposal.

"Follow the money and you'll see that some of the loudest opponents of President Biden's American Jobs and Families Plan are the ones with the most to lose," Maddy McDaniel, a spokesperson for the group, said in a statement to Salon. "They'd rather sell out their middle-class constituents than pay their fair share in capital gains taxes."

The 2017 Republican tax bill made the "like-kind" exchange or 1031 tax exemption exclusive for real estate investments, which allow investors to avoid capital gains taxes on a property by exchanging it for another one, effectively enabling them to "permanently avoid gains taxes." Former Treasury Secretary Larry Summers said the exemption allows the wealthy to "shelter their income" to avoid taxation. MSNBC host Stephanie Ruhle, a longtime former financial executive, described the break as a "legal real estate development grift."

Many of the Republican senators who backed the 2017 tax cuts realized big tax savings from the real estate tax breaks. At least 29 of the 47 Republican members of the committees that worked on the tax bill held interests in real estate, according to an analysis by the Center for Public Integrity.

The American Families Plan would roll back that "like-kind" exchange exemption. The proposal would "end the special real estate tax break — that allows real estate investors to defer taxation when they exchange property — for gains greater than $500,000," the White House said last month.

Some Republican senators stand to get hit the hardest by the rollback.

Sen. Ron Johnson, R-Wis., one of the wealthiest members of the Senate, this month claimed that "the economy was roaring back to life before Biden became president" and decried Biden's proposals as "reckless, out of control spending," arguing that the tax increases would "hurt American workers, businesses & families." Johnson, who was instrumental in inserting a tax break for real estate investors in the 2017 bill, reported owning a commercial real estate asset worth between $5 million and $25 million on his 2019 financial disclosure. By opposing Biden's tax plan, he could avoid at least an estimated $103,565 in capital gains taxes on his property in a like-kind exchange, according to the Invest in America Action analysis.

Sen. Rick Scott, R-Fla., who has railed against Biden's "disastrous tax and spend agenda," Sen. Richard Shelby, R-Ala., who has criticized Biden for "forcing the largest tax increase in a generation," and Sen. Rob Portman, R-Ohio, who claimed the tax increase would "kill jobs," each reported owning a real estate commercial asset valued between $1 million and $5 million. They could avoid more than $100,000 in estimated capital gains taxes in a like-kind exchange, according to the analysis.

Sen. Steve Daines, R-Mont., who claimed that Biden's "massive tax hikes create a direct threat to our prosperity and economic growth," reported owning four commercial real estate assets worth between $1 million and $5 million. He stands to save an estimated $414,260 in capital gains taxes, according to the analysis.

Commercial real estate groups have also decried the proposed rollback of the "like-kind" exchange exemption, arguing that taxing real estate profits would hamper new investment. Dozens of organizations have registered to lobby against the changes, according to The Wall Street Journal. The Joint Committee on Taxation estimated that the exemption will save investors $41.4 billion in taxes between 2020 and 2024. About 12% of all real estate sales between 2016 and 2019 were part of a "like-kind" exchange, according to the National Association of Realtors.

Some groups have argued that the change could have unintended consequences for middle-class homeowners in coastal states like New York and California where home prices are high. But sellers whose profit is less than $500,000 will still be able to benefit from the tax break.

"Some have speculated that this will hit middle-class home sellers who sell a home in an expensive market and have more than $1 million of capital gains from real estate, but this is very rare," Taylor Marr, the senior economist at real-estate brokerage Redfin, told MarketWatch. "Even in markets where home prices are over $1 million, most of that is still serviced by debt, not all equity."

The criticisms echo those made by opponents of Biden's proposal to increase the capital gains tax rate from 20% to 39.6% on those earning more than $1 million a year.

"Why would you treat an investment in a building differently than an investment in a stock or bond?" Chuck Marr, senior director of federal tax policy at the liberal-leaning Center on Budget and Policy Priorities, told The Wall Street Journal.

The Biden administration has said that exemption is one of many loopholes that disproportionately allow the wealthy to avoid taxes.

"Without these changes, billions in capital income would continue to escape taxation entirely," the administration said in a fact sheet detailing the proposal.

"The President's tax agenda will not only reverse the biggest 2017 tax law giveaways, but reform the tax code so that the wealthy have to play by the same rules as everyone else," the White House said last month. "Importantly, these reforms will also rein in the ways that the tax code widens racial disparities in income and wealth."

But the proposal has stalled amid negotiations between Biden, Republicans and Senate Democrats. Some centrist Democrats have echoed Republican talking points in support of user fees, despite Biden's promise not to raise taxes on those earning less than $400,000, and have expressed concerns about his proposed tax increases.

"User fees have to be part of the mix," Sen. Mark Warner, D-Va., told Axios last week. "I am generally supportive of what the president is trying to do, but I think his initial unwillingness to include user fees makes it really hard."

Sens. Tom Carper, D-Del., and Kyrsten Sinema, D-Ariz., have also discussed adding user fees to the proposal, according to the report.

But even Sen. Joe Manchin, D-W.Va., who has been a roadblock to numerous Democratic proposals in the early days of Biden's presidency, has criticized user fees as a tax on workers.

"Hell no, don't raise them," he warned last month.

Manchin, however, has pushed Biden to lower his proposed corporate tax increase. Biden's plan does not fully roll back the 2017 Republican tax cut, which drastically slashed the 35% corporate tax rate, but would raise the rate from 21% to 28% — the same rate that Manchin previously supported.

Manchin is not alone. Warner, Sinema and Sen. Jon Tester, D-Montana, have expressed concerns about Biden's corporate tax hike, according to Axios. Sen. Bob Menendez, D-N.J., who sits on the Senate Finance Committee, has also publicly criticized the proposed capital gains increase as too high.

A growing number of House Democrats have pushed back on the Senate negotiations, decrying the proposed user fees as a tax on the working class and urging Biden to end his attempt to negotiate with Republicans.

A group of 59 Democrats led by Pramila Jayapal, D-Wash., the chair of the Congressional Progressive Caucus sent a letter last week to House Speaker Nancy Pelosi, D-Calif., and Senate Majority Leader Chuck Schumer, D-N.Y., warning that "the pursuit of Republican votes cannot come at the expense of limiting the scope of popular investments."

The lawmakers called for a package more in line with the Build Back Better proposal Biden pushed on the campaign trail, which would cost about $7 trillion and include larger investments in climate-focused infrastructure.

"The widespread climate denial among Republican lawmakers poses a threat to the bold, necessary action on climate," they wrote. "Trump's massive tax giveaway — 80 percent of which accrued to the wealthy and large corporations … will likely remain a major obstacle."

Biden's Jobs and Families Plans are expected to cost about $4.5 trillion. While Democrats are much more likely to go smaller than bigger, they could use the budget reconciliation process they used to pass Biden's $1.9 trillion American Rescue Plan in March with a simple majority in the Senate. If the president can get enough votes from his own party, that is.