Joe Biden and the theater of bipartisanship: Democrats know GOP will never negotiate in good faith

Are moderate Democrats delusional? Or is this a pretend show of "bipartisanship" for voters who don't even care? 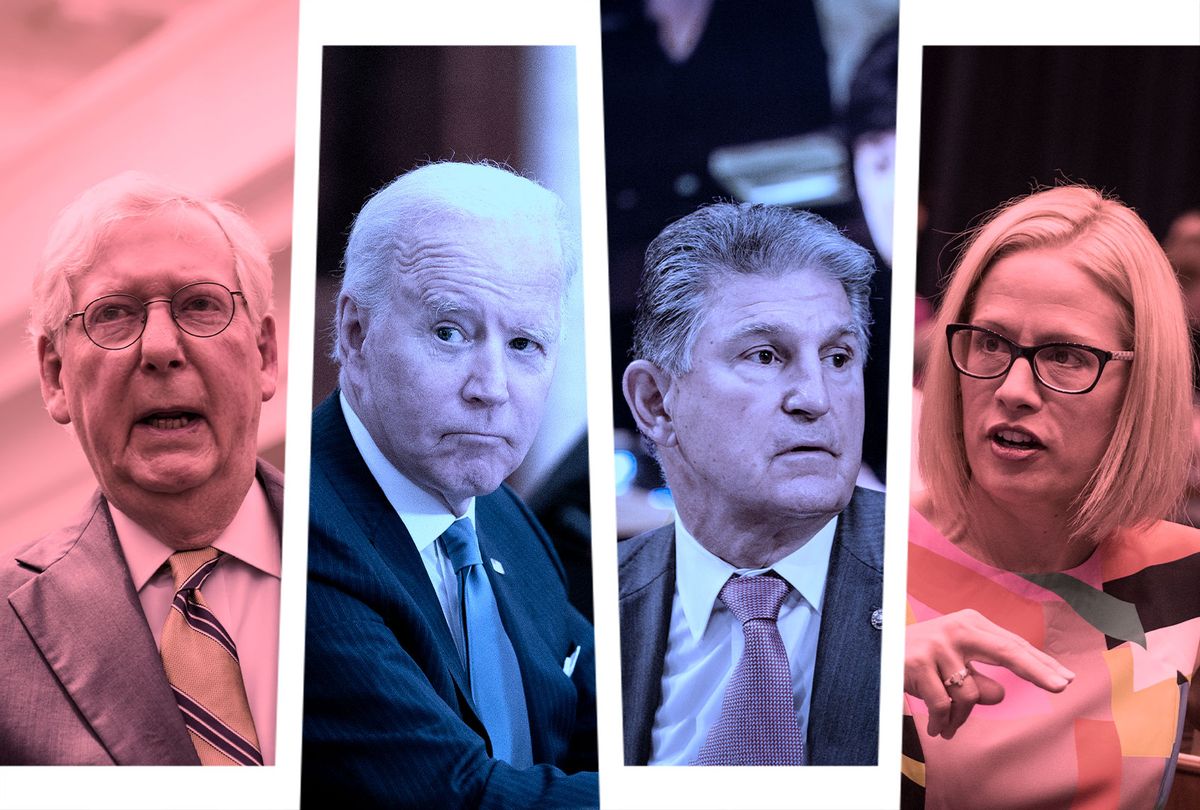 As part of their apparent mission to cause progressives to die from "I told you so" strokes, Politico ran this headline Monday evening: "'Time to move on': Infrastructure talks near collapse: Republicans have soured on negotiations while progressives push to move forward without the GOP."

The piece, yet another without a whiff of irony, portrayed the negotiations over the American Jobs Plan — Biden's $1.7 trillion bill to reinvest in the nation's infrastructure and build a more sustainable economy — as a real thing that Republicans were totally engaged in for real. It described Republicans as "mulling whether to even make a counteroffer" with bipartisan negotiations portrayed as taking "a nosedive on Friday." The general picture is one of two parties coming together in good faith to reach a deal, yet simply unable to do so.

This is all, of course, honking nonsense.

From day one, Republicans never had even the slightest inclination to strike a deal and were never going to find their way to a "compromise" that would result in any Republican votes to satisfy the seemingly endless need on the part of both Democrats and the mainstream media for "bipartisanship".

This is not a surprise. As Greg Sargent of the Washington Post wrote earlier this month, "Republicans have run a certain playbook," where they "hint at support for Democratic initiatives only if more concessions are offered, yet that support almost never materializes." It happens so often and so predictably that it "has become an online meme" — that of Lucy yanking away the football from Charlie Brown.

I am never disappointed by Democrats' decisions to, over and over again, operate as if Lucy is finally going to let them kick the football https://t.co/hObESwV9nx pic.twitter.com/4EawTMhSMY

Sargent wasn't even writing about the jobs and infrastructure bill, but about immigration. But really, the same story could be written about any bill, including, most recently, the carefully negotiated plans for a January 6 commission Republicans predictably blew up after wasting months of Democratic time. And yet, despite this same story playing out over and over and over again — and despite being warned this would happen by progressive pundits — a dizzying number of Democrats are happy to play the hopeful mark who is certain this time the grifter isn't grifting them.

But, of course, there were only two ways for this to end: A party-line vote through the budget reconciliation process, or by Republicans successfully running out the clock with fake negotiations. That's it. There is no option where Republicans vote for the bill. Republicans are smart enough not to give Democrats a win they can highlight in their re-election campaigns. To ever think otherwise is a fool's errand. McConnell even brags to reporters about how he has no intention of letting President Joe Biden have any political wins. Yet here moderate Democrats are, acting like the wife insisting this time, her philandering husband will not cheat on her, unlike the past 15 times she left yet went back to him.

Are moderate Democrats really this dumb? Do they really not see, after all this time, that Republicans view yearnings for "bipartisanship" as nothing more than a vulnerability to exploit? Is it humanly possible for people to not understand that they're being played, even in the face of so many of their allies telling them they're being played and a long history where every "negotiation" ends in exactly the same way? How many times do these toddlers have to touch the hot stove before they believe that it's actually hot?

Certainly, one should never underestimate how soft-headed power can make people. It's impossible to measure the amount of yes-siring that the average senator — especially one who has had their seat as long as some of these Democrats — receives over the years. Being surrounded by people happy to tell you what you want to hear famously dulls the ability to hear hard truths. Which is to say that yes, it may be that some of these Democratic senators really are that dumb.

Still, there is a theory that, since so many of these senators come from swing states, there's a little bit of a dog-and-pony show being performed for the voters with these fake negotiations. After all, polls routinely show that, when asked, vast majorities of voters will say things like "attempts at bipartisanship are a good thing." So it's entirely possible that some, if not all, Democrats who are doing this negotiation tapdance with Republicans know that it's fake, but still feel like they have to go through the motions in order to please voters.

If so, while that is slightly less dumb than negotiating in good faith, it's still extremely blinkered thinking.

Those polls are functionally meaningless, the equivalent of asking voters where they stand on the issue of whether rainbows are pretty. Of course, people are going to endorse the idea of compromise and negotiation, since that all sounds really nice and uplifting. But ultimately, most voters don't care, any more than most people spend more than a few seconds admiring a rainbow. Most voters can't even tell you who their congressional representatives are and they certainly don't spend time monitoring every news story to make sure the politician they voted for is putting on a big enough show of "bipartisanship." They just want Congress to get things done. Which is why it's foolish to let Republicans run out the clock so they can then run campaign ads accusing Democrats of not getting anything done.

The good news is most Democrats finally — finally — seem to get this, which is why there's an informal deadline next week for the fake negotiations to wrap up. Republicans have promised to propose a counteroffer on Thursday. The move to pass this bill how it was always going to pass — without Republicans — will then hopefully begin.

Still, while the infrastructure bill is likely to pass fairly intact, the damage done with the Theater of Bipartisanship is immeasurable. Republicans successfully sucked up months of valuable time that Democrats could have spent advancing other parts of Biden's agenda. There's unlikely now to be any energy left for fake negotiations around other priorities — such as gun control or climate change — that are apparently necessary to prove to moderate Democrats that Republicans are ungettable on those issues, as well. And, of course, Republicans have probably killed off any time or energy necessary for passing democracy reform, which means Republicans have paved their way to cheating in and possibly even stealing the 2022 and 2024 elections.