Anti-vaccine movements shift their target to the vaccinated 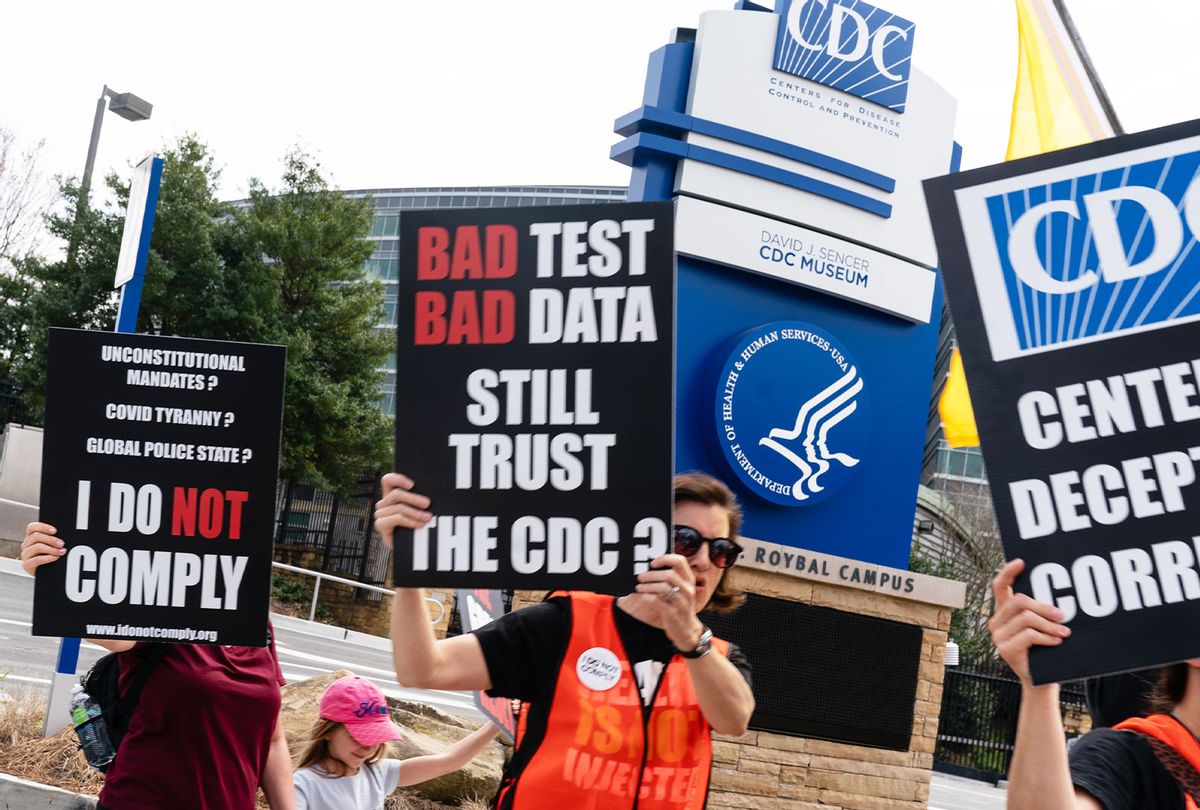 People hold signs at a protest against masks, vaccines, and vaccine passports outside the headquarters of the Centers for Disease Control (CDC) on March 13, 2021 in Atlanta, Georgia. To date, there has been over 534,000 deaths in the U.S. due to covid-19. (Elijah Nouvelage/Getty Images)
--

Myths around infertility, pregnancy and miscarriages have run rampant in anti-vaccine circles for years — and in the universe of their conspiracy theories, vaccines are often to blame. While variations of such false claims have been part of misinformation campaigns around the COVID-19 vaccines, there has recently been a shift from demonizing the vaccine itself to villainizing those who are vaccinated.

It's a peculiar repositioning for the anti-vaccination conspiracy movement — and as the false claim evolves into more extreme iterations, it has caught the attention of people who study and advocate against vaccine misinformation.

Broniatowski said he's never seen this before in the history of anti-vaccine rhetoric.

"This is the first time," Broniatowski said.

The conspiracy centers on one particular myth that people who are vaccinated can emit contagious particles of the coronavirus's Spike protein and can infect others, a process referred to as "vaccine shedding." Vaccine shedding is a very rare possibility with live-attenuated vaccines that use a diluted version of a disease to stimulate an immune response. In the rare case there's enough germ to spread, the shedding usually happens via feces— for example, with the polio vaccine or the measles vaccine.

"For the measles vaccine, later in life — and again this is super rare — it's possible that the live virus could revert to a condition called Subacute sclerosing panencephalitis (SSPE)," said Dr. Monica Gandhi, infectious disease doctor and professor of medicine at the University of California–San Francisco. "But in no way can you shed it and give it to someone."

But this issue is moot in the case of messenger RNA, or mRNA vaccines, like the Pfizer and Moderna vaccines — which the majority of the vaccinated American population has been administered with. These kinds of vaccines work by instructing the body to make a bespoke Spike protein to trigger an immune response. After an immune response is triggered, the protein disappears. In other words, viral shedding is an impossibility for these mRNA vaccines.

"Just because you yourself make the Spike protein yourself, and that's the design of the vaccine, that spike protein is just a fragment of the live virus," Gandhi said. "It is in no way alive or capable of infecting anyone else."

But even though the AstraZeneca and Johnson & Johnson vaccines are adenovirus vaccines, it is impossible for shedding to occur in the case of these vaccines. That's because they don't actually contain weakened versions of the coronavirus; rather, they contain weak adenoviruses that have been modified to contain a piece of coronavirus DNA.

In other words, vaccinated people cannot shed the coronavirus, and thus they aren't contagious.

Despite the "vaccine shedding" myth being continuously debunked by credible sources, iterations of the claim are becoming increasingly popular. Peculiarly, these myths have a tinge of sexism, as many of them revolve around false claims about women's bodies, mirroring other falsehoods about women that have existed for centuries.

Specifically, there have been forms of the false claim that a vaccinated woman's menstrual cycle can throw off an unvaccinated woman's cycle, stoking fear and sowing divides between vaccinated and unvaccinated women. Naomi Wolf, a bestselling author who has been pushing conspiracy theories around the COVID-19 vaccines repeatedly, has tweeted about the claim a couple times.

"Well hundreds of women on this page say they are having bleeding/ clotting after vaccination or that they bleed oddly being AROUND vaccinated women," Wolf tweeted, referring to a discussion in a Facebook group.

The consequences of variations of this myth extend beyond misinformation online and into the real world. As reported by NBC News, the owner of a butcher shop in Ontario, Canada, banned all people who were vaccinated from COVID-19 to protect unvaccinated female customers.

"We have decided that since the majority of our customers are women and since women are most at risk for these side effects, we ask that if you've been vaccinated to please order for curbside pickup or delivery for 28 days after being vaccinated," the post read on Instagram.

Imran Ahmed, the CEO of The Center for Countering Digital Hate (CCDH), told Salon those incidences are "isolated" but the peculiar shift in blame from vaccines to the vaccinated is a strategic response to unvaccinated people being seen as a threat, as they can be potential carriers of the coronavirus.

"The problem that anti-vaxxers are having is they're asking people to become disgusting to other people [by not getting vaccinated], and they know that that's a major barrier to people accepting their recommendations, which is that people don't want to be seen as disgusting," Ahmed said. "So what they're doing is trying to muddy the waters in this crucial battleground — what is it that people find to be disgusting, a potential disease vector? And they're saying, 'Hey, you're not the disease vector by being unvaccinated, they're the disease vector.'"

Ahmed added it's likely that they've latched on to the idea of vaccine shedding because it's "vaguely scientific."

However, claims like those pushed by Wolf — stories about unvaccinated women's menstrual cycles being affected by those of vaccinated women — are curious in that they both target and demonize women.

"There have been a number of disinformation campaigns that have explicitly targeted women of childbearing age," Broniatowski explained.

For instance, a group called Children's Health Defense, whose Instagram page has over 217,000 followers, bills its mission as "End[ing] childhood health epidemics by exposing causes, eliminating harmful exposures; seeking justice for injured and establishing safeguards." Social media posts from Children's Health Defense often involve claims of varying veracity about pesticides or nutrition; a parent interested in such topics might reasonably follow their page, not knowing that media watchdogs widely regard Children's Health Defense as a fount of pseudoscience and quackery. Yet those who the organization's website are apt to discover blog posts that parrot misinformation about fertility and the COVID-19 vaccine.

Ahmed explained that this kind of content often targets women, getting them in the door before propagandizing anti-vaccination pseudoscience. This is precisely, Ahmed said, what anti-vaxxers want. Indeed, Ahmed noted that anti-vaxxers can "profit" from spreading misinformation, though that "profit" can be political, economic or psychological.

"And then you've got the vaccine hesitant, who are like, 'I just don't know what to do, I'm hearing all this stuff and I'm worried' — and then you have the people in the middle layer, which is the mid-level marketers of the anti-vaccine movement, who are taking action based on the information given to them."

Notably, many of these false claims that make their rounds circling the internet only come from a small group of people.

"We know that 65 percent of the misinformation shared on social media originates from just 12 individuals and the companies . . . that they use to promote their information," Ahmed said. "There are specific individuals within that who target women and women who are interested in health and wellness."