Simone Biles should be praised, not punished for achieving a feat that was deemed impossible

Her talent has been criticized as unfair to other gymnasts — something that's celebrated for white, male athletes 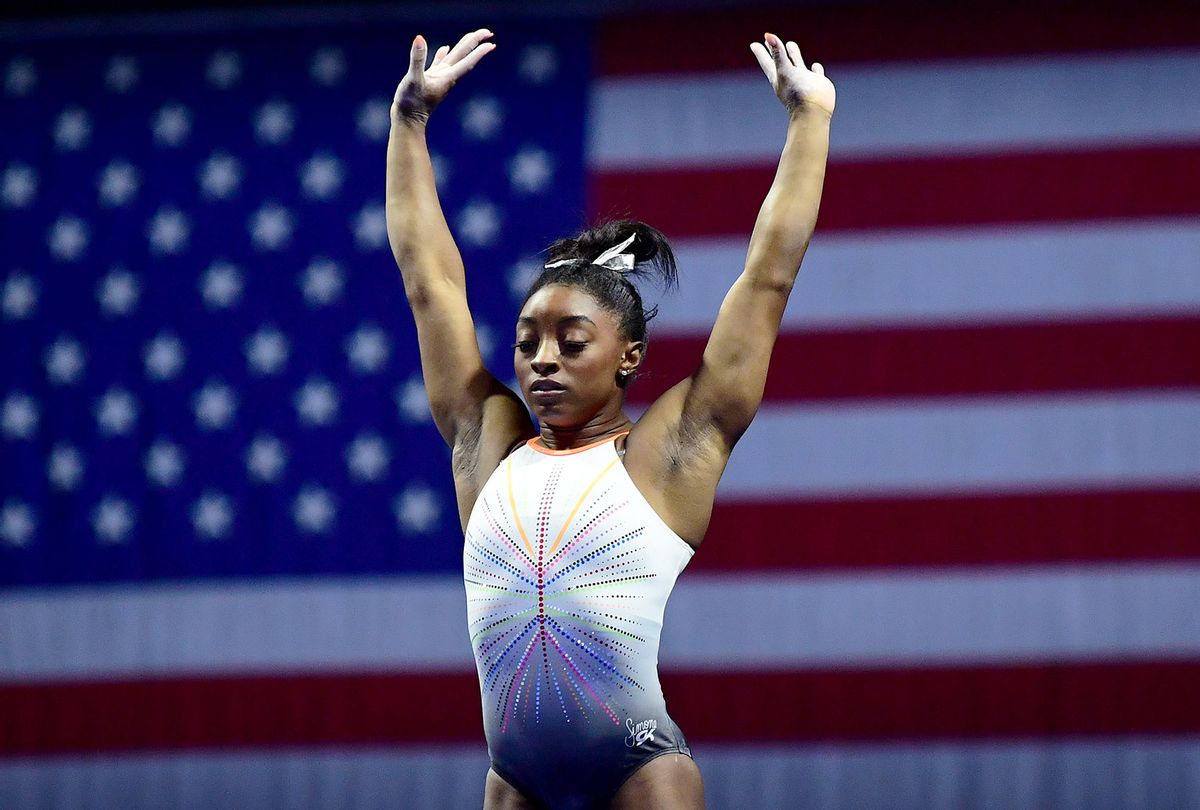 Simone Biles warms up on the beam prior to the 2021 GK U.S. Classic gymnastics competition at the Indiana Convention Center on May 22, 2021 in Indianapolis, Indiana. (Emilee Chinn/Getty Images)
--

Last week, ahead of the long-delayed Tokyo Olympics this summer, Simone Biles performed a new move at the U.S. Classic: the Yurchenko double pike, captured in a tweet below. The Olympic gold medalist is widely recognized as the greatest gymnast in the world, and her historic delivery of yet another never-been-done-before move shows us this reputation is well-earned.

Per the New York Times, the Yurchenko double pike is "so perilous and challenging that no other woman has attempted it in competition, and it is unlikely that any woman in the world is even training to give it a try."

However, the undervaluation of Biles' performance by judges is bringing attention yet again to how the athlete has repeatedly been punished rather than rewarded for her greatness, and the double standards applied to reception to her performances. Specifically, Biles' execution of the Yurchenko double pike for her vault routine was given a provisional score of 6.6, similar to her scores for other vaults and without any additional points for or acknowledgement of the near-impossible difficulty of the move.

This has happened to Biles before in other routines through the years, as she executes moves that no other female gymnasts have attempted or completed.

Gymnastics routines are judged and scored based on their execution and difficulty. But rather than recognize or reward Biles' exceedingly difficult routines and moves with the added points they deserve for their difficulty, judges have often undervalued her performances that include historic completion of new moves. The rationale for this scoring has often been that there are safety risks for other gymnasts who aren't able to complete the moves that Biles is, if her moves are rewarded with high scores and other gymnasts are then motivated to try them.

Biles' talent has also been criticized as somehow being unfair to other gymnasts, for her ability to do what others can't — something that's often celebrated and glorified for white or male athletes. For example, Michael Phelps, a swimmer who's won more Olympic medals than anyone in history, is widely recognized and beloved as the greatest swimmer of our time, despite his immense, built-in advantages, including not just the size and proportions of his body, but how his body produces half the amount of lactic acid of the average person, which decreases his fatigue and sharply increases his recovery time.

In other words, on a technical and cultural level, Biles, a young Black woman, is being punished and subjected to undeniably racist and sexist double standards for her greatness. After all, we've seen some form of this before, for other Black women athletes — Caster Semenya, a South African two-time Olympic champion runner, was literally barred from competing in women's sports last year unless she agreed to take medication to lower her naturally higher levels of testosterone. When Black women athletes work hard and go above and beyond, they're treated with suspicion, as if they're somehow being dishonest, or as if their success is a detriment to others that should be punished, restricted and prevented rather than encouraged. From Semenya to Biles, they and other Black women athletes face the same, intertwined racism and misogyny.

Since her post-Yurchenko double pike snub over the weekend, Biles has criticized this judging, but has mostly just been celebrating her phenomenal achievement, as she should.

"They're both too low and they even know it. But they don't want the field to be too far apart. And that's just something that's on them. That's not on me," Biles told the New York Times about the low scoring of her new moves.

In a tweet on Monday, she also expressed her continued, shocked joy, writing, "I'm sorry but I can't believe I competed a double pike on vault."