Tony Blinken talks about a "rules-based order" — does he mean the U.S. gets to make the rules? 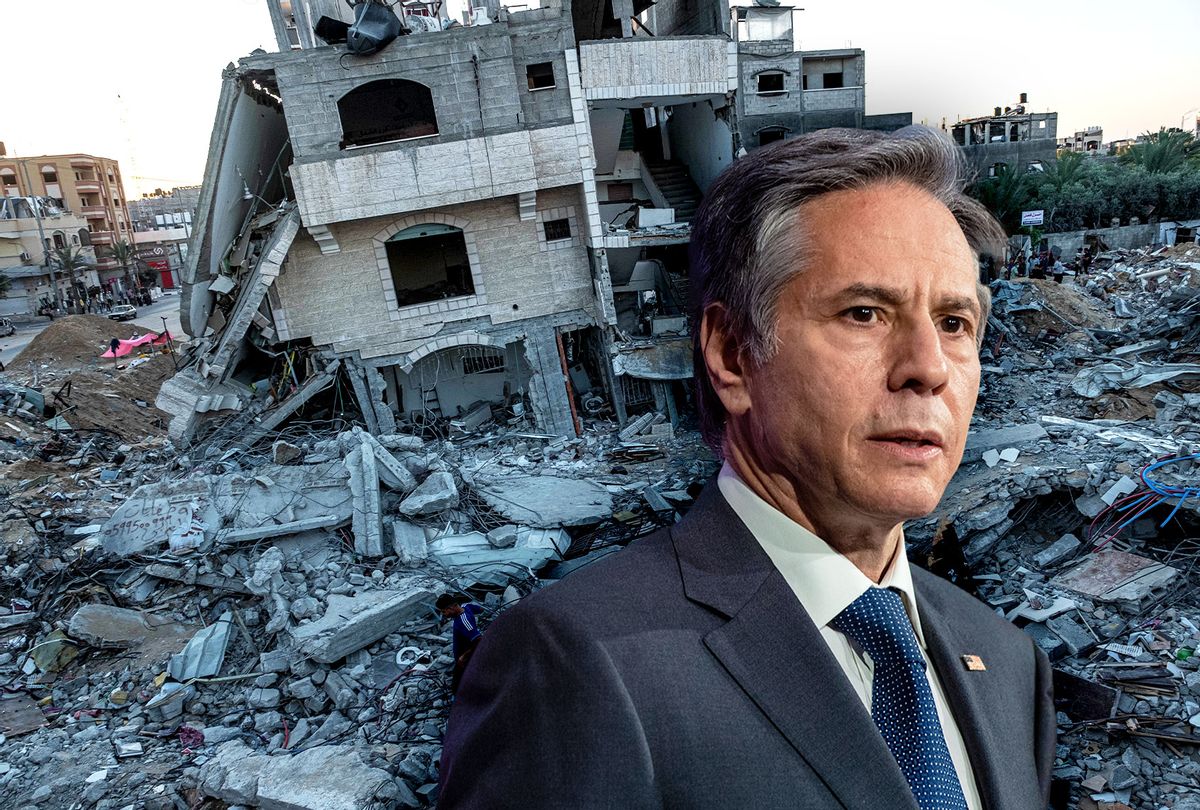 The world is reeling in horror at the latest Israeli massacre of hundreds of men, women and children in Gaza. Much of the world is also shocked by the role of the United States in this crisis, as it keeps providing Israel with weapons to kill Palestinian civilians, in violation of U.S. and international law, and has repeatedly blocked action by the UN Security Council to impose a ceasefire or hold Israel accountable for its war crimes.

In contrast to U.S. actions, in nearly every speech or interview, Secretary of State Antony Blinken keeps promising to uphold and defend the "rules-based order." But he has never clarified whether he means the universal rules of the UN Charter and international law, or some other set of rules he has yet to define. What rules could possibly legitimize the kind of destruction we just witnessed in Gaza, and who would want to live in a world ruled by them?

We have both spent many years protesting the violence and chaos the United States and its allies inflict on millions of people around the world by violating the UN Charter's prohibition against the threat or use of military force, and we have always insisted that the U.S. government should comply with the rules-based order of international law.

But even as the United States' illegal wars and support for allies like Israel and Saudi Arabia have reduced cities to rubble and left country after country mired in intractable violence and chaos, U.S. leaders have refused to even acknowledge that aggressive and destructive U.S. and allied military operations violate the rules-based order of the UN Charter and international law.

Former President Trump was clear that he was not interested in following any "global rules," only supporting U.S. national interests. His national security adviser, John Bolton, explicitly prohibited National Security Council staff attending the 2018 G20 Summit in Argentina from even uttering the words "rules-based order."

So you might expect us to welcome Blinken's stated commitment to the "rules-based order" as a long-overdue reversal in U.S. policy. But when it comes to a vital principle like this, it is actions that count, and the Biden administration has yet to take any decisive action to bring U.S. foreign policy into compliance with the UN Charter or international law.

For Blinken, the concept of a "rules-based order" seems to serve mainly as a cudgel with which to attack China and Russia. At a May 7 UN Security Council meeting, Russian Foreign Minister Sergey Lavrov suggested that instead of accepting the already existing rules of international law, the United States and its allies are trying to come up with "other rules developed in closed, non-inclusive formats, and then imposed on everyone else."

The United States played a leading role in this legalist movement in international relations, from the Hague Peace Conferences at the turn of the 20th century to the signing of the UN Charter in San Francisco in 1945 and the revised Geneva Conventions in 1949, including the new Fourth Geneva Convention to protect civilians, such as the countless numbers killed by American weapons in Afghanistan, Iraq, Syria, Yemen and Gaza.

As President Franklin D. Roosevelt described the plan for the United Nations to a joint session of Congress on his return from Yalta in 1945:

It ought to spell the end of the system of unilateral action, the exclusive alliances, the spheres of influence, the balances of power, and all the other expedients that have been tried for centuries — and have always failed. We propose to substitute for all these a universal organization in which all peace-loving nations will finally have a chance to join. I am confident that the Congress and the American people will accept the results of this conference as the beginning of a permanent structure of peace.

But America's post-Cold War triumphalism eroded U.S. leaders' already half-hearted commitment to those rules. The neocons argued that they were no longer relevant and that the United States must be ready to impose order on the world by the unilateral threat and use of military force, exactly what the UN Charter prohibits. Former Secretary of State Madeleine Albright and other Democratic leaders embraced new doctrines of "humanitarian intervention" and a "responsibility to protect" to try to carve out politically persuasive exceptions to the explicit rules of the UN Charter.

America's "endless wars," its revived Cold War with Russia and China, its blank check for the Israeli occupation and the political obstacles to crafting a more peaceful and sustainable future are some of the fruits of these bipartisan efforts to challenge and weaken the rules-based order.

Today, far from being a leader of the international rules-based system, the United States is an outlier. It has failed to sign or ratify about 50 important and widely accepted multilateral treaties on everything from children's rights to arms control. Its unilateral sanctions against Cuba, Iran, Venezuela and other countries are themselves violations of international law, and the new Biden administration has shamefully failed to lift these illegal sanctions, ignoring UN Secretary-General António Guterres' request to suspend such unilateral coercive measures during the pandemic.

So is Blinken's "rules-based order" a recommitment to FDR's "permanent structure of peace," or is it in fact a renunciation of the UN Charter and its purpose, which is peace and security for all of humanity?

In the light of Biden's first few months in power, it appears to be the latter. Instead of designing a foreign policy based on the principles and rules of the UN Charter and the goal of a peaceful world, Biden's policy seems to start from the premises of a $753 billion U.S. military budget, 800 overseas military bases, endless U.S. and allied wars and massacres, and massive weapons sales to repressive regimes. Then it works backward to formulate a policy framework to somehow justify all that.

Once a "war on terror" that only fuels terrorism, violence and chaos was no longer politically viable, hawkish U.S. leaders — both Republicans and Democrats — seem to have concluded that a return to the Cold War was the only plausible way to perpetuate America's militarist foreign policy and multi-trillion-dollar war machine.

But that raised a new set of contradictions. For 40 years, the Cold War was justified by the ideological struggle between the capitalist and communist economic systems. But the USSR disintegrated and Russia is now a capitalist country. China is still governed by its Communist Party, but has a managed, mixed economy similar to that of Western Europe in the years after the Second World War — an efficient and dynamic economic system that has lifted hundreds of millions of people out of poverty in both cases.

So how can these U.S. leaders justify their renewed Cold War? They have floated the notion of a struggle between "democracy and authoritarianism." But the United States supports too many horrific dictatorships around the world, especially in the Middle East, to make that a convincing pretext for a Cold War against Russia and China.

A U.S. "global war on authoritarianism" would require confronting repressive U.S. allies like Egypt, Israel, Saudi Arabia and the United Arab Emirates, not arming them to the teeth and shielding them from international accountability as the United States is doing.

So just as American and British leaders settled on nonexistent WMDs as the pretext they could all agree on to justify their war on Iraq, the U.S. and its allies have settled on defending a vague, undefined "rules-based order" as the justification for their revived Cold War with Russia and China.

But like the emperor's new clothes in the fable and the WMDs in Iraq, the United States' new rules don't really exist. They are just its latest smokescreen for a foreign policy based on illegal threats and uses of force and a doctrine of "might makes right."

We challenge President Biden and Secretary Blinken to prove us wrong by actually joining the rules-based order of the UN Charter and international law. That would require a genuine commitment to a very different and more peaceful future, with appropriate contrition and accountability for the United States and its allies' systematic violations of the UN Charter and international law, and the countless violent deaths, ruined societies and widespread chaos they have caused.