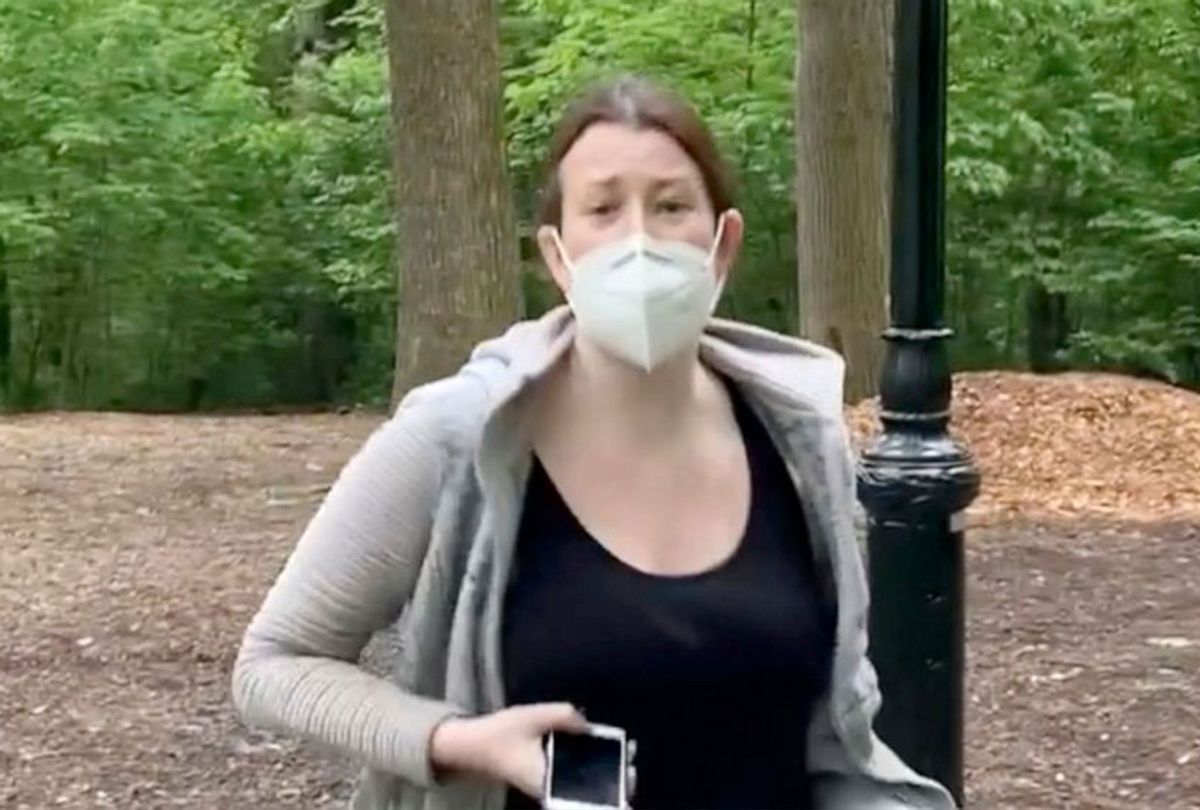 Oh boy! Amy Cooper — the infamous "Central Park Karen" — clearly has no problem reminding everyone of her infamy.

On Wednesday, it was reported that Cooper is suing her former employer, investment firm Franklin Templeton, for — you guessed it! — racial discrimination. Cooper had her 15 minutes of national attention last year when she called the police on Christian Cooper (no relation), a Black man and birding enthusiast who asked her to leash her dog in a leash-only area of New York City's Central Park. Mr. Cooper filmed her telling 911 that "I'm being threatened by a man," which wasn't true.

While Christian Cooper left before any police arrived, the video was chilling — especially in light of the epidemic of police violence against Black people in the U.S. Quite literally, the incident happened the very same day that Minneapolis police officer Derek Chauvin calmly murdered George Floyd in full view of a crowd of witnesses. Cooper herself released public statements last year insisting that she is "not a racist" and "did not mean to harm that man," but nonetheless claiming, "It was unacceptable, and I humbly and fully apologize to everyone who's seen that video."

Her firm still let her go.

Those who were understandably skeptical of Cooper's "apology" are no doubt vindicated by her lawsuit, in which she claims she "was alone in the park and frightened to death," a claim that anyone who watches the video has every right to be skeptical of. (It's worth a rewatch, to be reminded of how calm Amy Cooper is when she threatens Christian Cooper, and how she turns on the "scared" voice when the call to 911 patches through.) She also accuses the bird watcher of being "overzealous," even though she was the one who had to take a "therapeutic" class on racial bias in order to get the charge of filing a false police report dismissed.

But while Cooper's arrogance is truly next level, her playing-the-victim lawsuit is emblematic of a wave of white whininess that's crashing over the U.S. right now, as large numbers of white people — mostly, but not exclusively Donald Trump voters — convince themselves that it's not racism that is a problem in the U.S., but the bogeyman of white people being victimized by anti-racists.

Take, for instance, the surge of chatter about "critical race theory." If you have no idea what the hell your drunk uncle is talking about when he raves about this on Facebook, well, you're not alone. Critical race theory was, until this year, an obscure concept outside of the narrow confines of legal scholarship, used mainly by law professors to explain the historical reasons for ongoing racial inequalities baked into the legal system.

But "critical race theory" sure does sound scary to defensive white people who are sure the "woke" mob is going to find out about that racist joke they told at a poker game last year and "cancel" them, as Fox News keeps warning will happen. And so right-wing media has spent months making sure the term "critical race theory"  is on the lips of every Donald Trump voter still mad that they "let" Philadelphia and Detroit vote in the 2020 election.

The idea that "critical race theory" is a widespread threat to white people was invented, whole cloth, by the right-wing media and then pumped out vigorously. As the Washington Post reported, mentions of "critical race theory" on cable news simply didn't exist prior to this year, but there's been an explosion of uses of that term on Fox News in recent months. A similar study from Media Matters shows that, by early May, the term had been used — inaccurately in most, if not all, cases — on Fox News at least 552 times in the past year.

The right would have you believe that it's the left that made "critical race theory" a thing, and they are merely reacting. But another study of Facebook posts by Media Matters found that pretty much the only people talking about "critical race theory" online are Republicans, with nearly 90% of the posts from political pages and 97% of the interactions coming from conservative figures.

To be certain, there is nothing wrong with real-life critical race theory, which is a valuable tool for academics analyzing legal and cultural issues. But right-wing media doesn't use the term accurately. It's just a stand-in for a generalized fear that "woke" culture is coming to get white people. And also, of course, as justification to silence — or, as one might say, cancel — any discussion or attempt to educate people, especially students, about the existence or history of racism in America.

The result has been an explosion of bills in red states that, under the guise of protecting white people from being discriminated against, are banning "critical race theory." But, as critics told Adam Harris at The Atlantic, the real purpose is to "effectively prevent public schools and universities from holding discussions about racism" — including, quite likely in many cases, teaching kids the truth about slavery and Jim Crow in history class.

In Oklahoma, for instance, a new law bans any school curriculum that could cause a student to "feel discomfort, guilt, anguish or any other form of psychological distress on account of his or her race or sex." The bill is packed full of nice-sounding language about non-discrimination and racial equality, but it's obvious that the real purpose is to scare teachers away from discussing any history — such as the 1921 Tulsa race massacre — that could unsettle white kids whose parents raised them to believe racism isn't real. After signing the bill into law, Oklahoma's Republican governor was booted from the centennial commission on the Tulsa massacre. The commission's director said that the ban signed by Gov. Kevin Stills "chills the ability of educators to teach students, of any age, and will only serve to intimidate educators who seek to reveal and process our hidden history."

This hyperventilating white victimhood mentality is also on full display in Missouri, where lawyer Mark McCloskey announced his Senate candidacy earlier this month. McCloskey became infamous last summer when he and his wife, Patricia McCloskey, were taped waving guns at a group of Black Lives Matter protesters who were peacefully marching in the street by their house.

In his Fox News announcement, McCloskey claimed, "God came knocking on my door disguised as an angry mob. In reality, no one knocked on his door. Protesters were, quite literally, just walking by to get to another location and only interacted with the McCloskeys after they pulled guns on them. McCloskey also whined about "critical race theory," and for all we know, he also has delusions that this previously obscure bit of academic jargon knocked on his door. Greg Sargent of the Washington Post characterized McCloskey's announcement as the "anti-leftist hyperbole you hear constantly from Republicans," noting that it is the result of "the complete unshackling of oneself from any empirical constraints in depicting the leftist threat."

And this problem is only growing.

As Jennifer Chudy and Hakeem Jefferson report at the New York Times, "Republicans and white people have actually become less supportive of Black Lives Matter than they were before the death of George Floyd." In the past year, the majority of white people saw all this evidence of racism and police violence, and somehow still found their way to a story where white people are the real victims and the bad guys are the people speaking out against racism.

So sure, Amy Cooper's narcissism and self-pity may seem over the top, but the sad truth is she is just a particularly noxious example of a nationwide problem. Trump managed to get a shocking 74 million votes, more than any Republican candidate in history, after running a campaign that was a full-on right-wing fantasy about "cancel culture" more than about any real issues facing the nation. In 2021, the majority of white Americans would rather believe a fantasy where they're the victims, rather than admit, even just a tiny bit, that racism is still a real problem. And, like Amy Cooper, they're taking their self-pitying delusions out on everyone else.