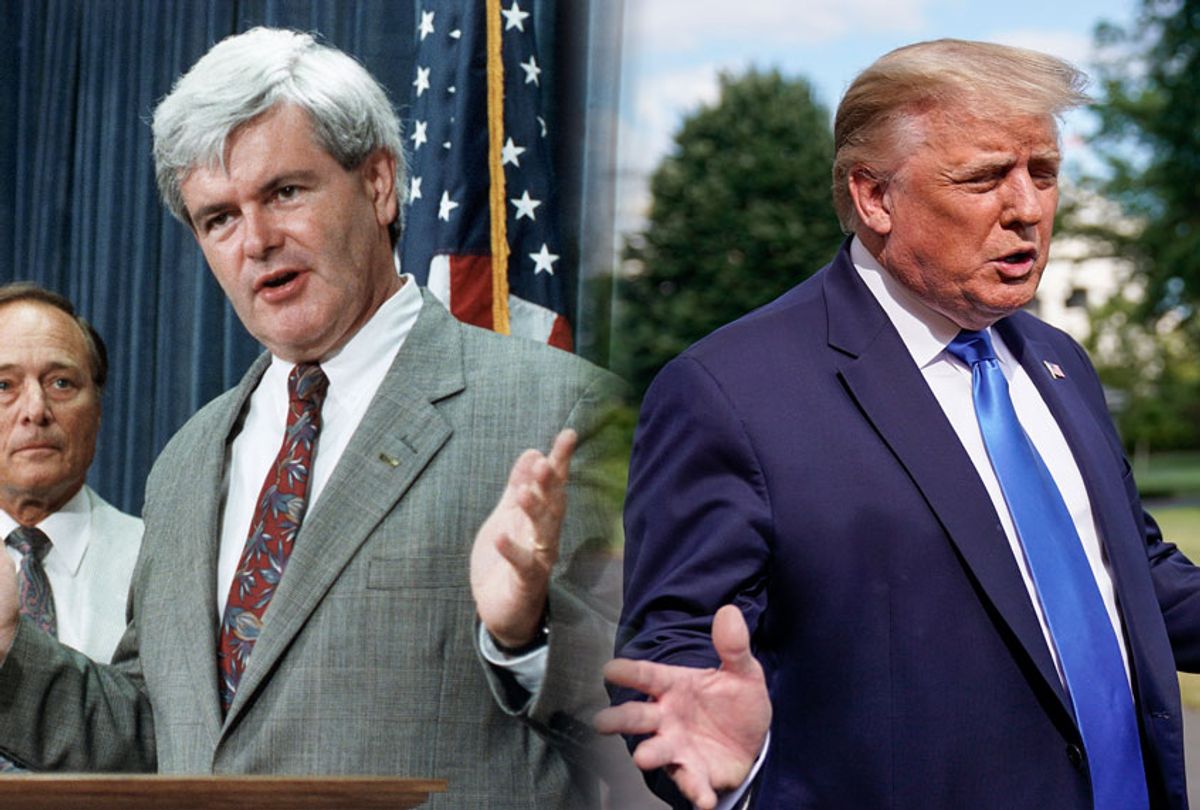 Watching Republican Senators perform their tortured Donald Trump fealty dance over the January 6th Commission on Thursday would have been amusing if it weren't so pathetic. Some furrowed their brows with concern while others defiantly refused to even speak with the grieving mother of Capitol police officer Brian Sicknick who died that day. The Senate Majority Leader Mitch McConnell, who delivered a scathing speech on the floor of the Senate after Trump was acquitted in his second impeachment trial, was reportedly calling individual senators and begging them to vote against the bill as a personal favor to him (and no doubt a very special gift for Donald Trump.) Republicans spent the night vamping, preening and delaying so they could vote against the bill under cover of darkness in the wee hours of the morning and then sneak out of town without having to face the media or their consciences. Unfortunately, the vote had to be postponed until Friday so now they will just have to own their shame in front of the whole country.

January 6th is a day that will live in infamy just like December 7th and 9/11. But this one implicates the former president and dozens of elected Republicans have decided that they must circle the wagons to prevent any bipartisan investigation which might put that on the record.

For the most part, the GOP has regained its balance in the wake of the Big Lie and January 6th by simply capitulating to the reality that it's Donald Trump's party and they are just along for the ride. All the polling shows that the vast majority of Republican voters still revere him and if he chooses to run again in 2024, he is the overwhelming favorite to win the nomination. If any of them still have reservations, they're comforting themselves with the illusion that his authoritarian madness is better than allowing the government to spend money on average working families and the poor and the sick as President Biden is proposing.

Interestingly, as the Republicans in DC were making fools of themselves on Thursday trying to please the Dear Leader, a former GOP superstar gave a speech at the Reagan Library in which he implored the party to stop catering to Trump and focus on ideology again. Fox News board member Paul Ryan, former speaker of the House and one time Great Young Gun of the GOP, laughably asserted, "voters looking for Republican leaders want to see independence and mettle."

"They will not be impressed by the sight of 'yes men' and flatterers flocking to Mar-a-Lago," Ryan asserted.

Clearly, he's been out of the country, perhaps visiting another planet, for the last few years. They love "yes men and flatters flocking to Mar-a-lago." In fact, it is a requirement, as his successor the Minority Leader Kevin McCarthy can attest. (And, by the way, Ryan couldn't even bring himself to mention Trump by name the entire speech. So much for that profile in courage.)

If Ryan wants to put an end to this cycle of sycophancy, he might want to start by having a little chat with his fellow Fox News board members Rupert and Lachlan Murdoch. They are just as responsible for the fetid mess the Republican Party has become as Donald Trump is. More actually.

As it happens, Ryan isn't the only former speaker of the House trying to push the Republican party to start pretending they care about policy. Trump's Majordomo Senator Lindsay Graham of South Carolina has teamed up with 90s throwback Newt Gingrich to do one of those popular 90s reboots everyone's all excited about. Politico reports that they're working on a MAGA Contract for America:

The group is still just beginning to hammer out the details of what a Trumpified Contract might look like. But it is likely to take an "America-First" policy approach on everything from trade to immigration. The source described it as "a policy priority for 2022 and beyond."

Gingrich described it this way:

"It should be positive. School choice, teaching American history for real, abolishing the '1619 Project,' eliminating critical race theory and what the Texas legislature is doing. We should say, 'Bring it on.'"

If there's one thing you can say about Gingrich it's that he's a sunny, upbeat forward-thinking guy, as you can see by what he considers a "positive" agenda. His original Contract with America was a monstrous document, calling for punitive measures against poor women, destroying product liability, extremely harsh criminal justice laws and more. They were the far right's racist dog whistles combined with the mainstream's corporate giveaways but they were sold with an aggressively hostile demagogic pitch that the right-wing voters who listened to talk radio were thrilled to hear.

Luckily, most of it was never enacted although I'm not sure Republican voters ever knew that — or cared for that matter. It was a political document, introduced late in the campaign that served Gingrich's myth more than anything else. He was the great Republican hope of his day, battling mano-a-mano with President Clinton and almost always losing until he was finally forced out after the GOP's 1998 midterm drubbing during the impeachment crisis. Since then he's been a Fox News gadfly desperately seeking relevance. Like so many other aging 90s icons, he's seizing his chance to relive his glory days.

Trump actually already issued a "Contract with the American Voter" in the month before the 2016 election with 28 policies he promised to enact in his first hundred days. (The branding genius has never once come up with an original slogan.) I don't think anyone read it, almost certainly not Trump himself. He has never had any interest in specific policy beyond his singular obsessions with immigration and trade anyway. But he is attentive to the right-wing media zeitgeist which, as you can see by the "ideas" Gingrich threw out, are really what this contract is going to be all about.

It has been said before but deserves to be said again: The Republican party is out of ideas.

The GOP is organized solely around their resentments and Republican voters love Trump because he speaks to what they care about. He even gives them new grievances to complain about! People like Liz Cheney and Paul Ryan think their voters have been hoodwinked by Trump's magical powers while Lindsay Graham and Kevin McCarthy think they can rework Trump's appeal into something recognizable as a functioning political party.

Republicans know exactly what they have in Trump and it's exactly what they want. And if there's one person who gets that it's Newt Gingrich. After all, he's the man who laid the foundation for Trumpism all those years ago.