"Mare of Easttown" is twisty until the very end, but the best part is its grace

HBO's prestige murder mystery is this spring's best whodunnit. Its other defining quality, however, is absolution 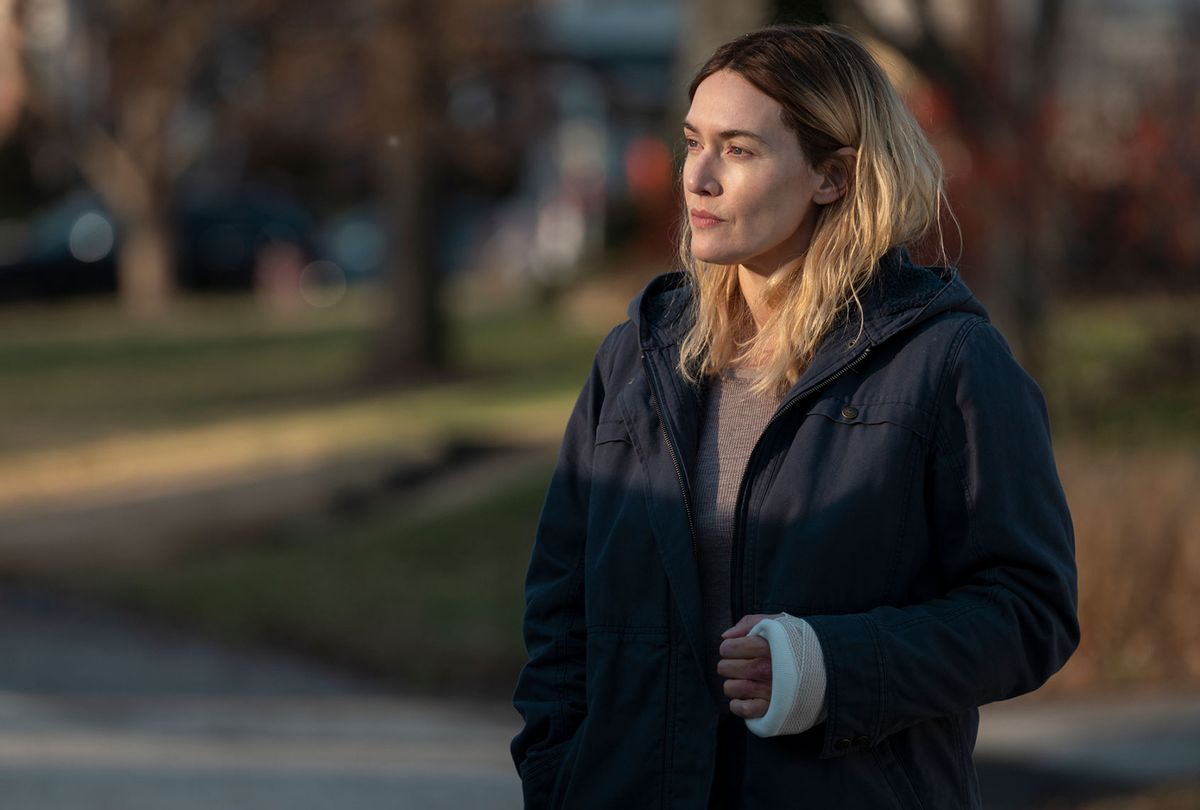 Spoiler warning: The following story discusses the finale of "Mare of Easttown" in detail. If you haven't watched the show yet, what are you waiting for? Stop reading now and don't come back until you've binged it.

If you described Easttown as an incestuous place at the start of "Mare of Easttown," you may have mixed emotions about how right you were all along. You probably didn't mean it literally, right? And, yet.

Series creator Brad Ingelsby writes the overfamiliarity of Easttown as a blessing and a curse for detective sergeant Mare Sheehan (Kate Winslet), since everybody in the place knows her well enough to trust her while also resenting her.

Such a tightly knitted community means that anyone in that slumping burg could have a motive for murdering teen mother Erin McMenamin (Cailee Spaeny). Except, well, for Mare or her mother Helen (Jean Smart). But aside from those two the list of suspects stretched long enough to cordon off a soccer field. It also hit very close to home.

Mare's daughter Siobhan (Angourie Rice) was among the last people to see her alive. Her ex-husband Frank (David Denman) made the mistake of being a good Samaritan, which wouldn't have caused any trouble if Erin hadn't turned up dead and the paternity of the son she left behind never came into question.

Suspicion bounced around from Erin's cruel teenage ex-boyfriend Dylan (Jack Mulhern) to any number of men in her orbit. Even Guy Pearce's literature professor and new guy in town Richard Ryan, Mare's most persistent suitor, had a huge question mark hovering over his head. (By the "Law & Order" rule of "the most famous person in the story who isn't a series regular probably did it" making Richard look good for the crime early on.)

But the circle eventually tightened to those closest to the victim.

The fact that Ingelsby and series director Craig Zobel insisted on ensnaring the audience in uncertainty up to and throughout the finale, even after the guiltiest looking parties confessed, is a credit to their adroit construction and manipulation of dramatic tension.

But they also worked up the audience to expect nothing less. Erin's murder drove the A-plot, often weaving down the road through an obstacle course of misdirects and MacGuffins as the mystery of her life informed her death. Everything after that became questions leading into cliffhangers.

Was her murder a one-off or related to the disappearance of Katie Bailey, the daughter of Mare's high school basketball teammate Dawn (Enid Graham)? Were there crimes within these crimes? In Erin's situation, yes! Several!

The walls of crazy and theories this show inspired were impressive and highly necessary, since every character with a line and a link to Mare has a story worth knowing and, perhaps, relevant to the main murder. And through the first four episodes, anyway, the sheer number of characters jostling for space muddled the plot. But as Helen would probably attest, sometimes a muddle mixed with spirits, bitters and twists makes a smashing cocktail. The woman knows and loves her Manhattans.

In the end, what distinguishes "Mare of Easttown" from the typical murder mystery and other prestige shows – besides Winslet's superior performance – is the way it swims with and through grief.

In my initial review I wrote about how heavily sadness hangs on this Pennsylvania working-class hamlet. The place itself has nothing on Mare, a woman whose determination to solve crimes and to serve and protect is really her way of hiding behind everyone else's grief. If she were to stop, she'd have to mourn her son's suicide.

When Winslet allows the dam surrounding Mare's despair to crack a little, frosting the blank spaces between lines of dialogue with pure aching emotion, tearing your eyes away is impossible. She also nails the regional accent, from what I understand, but her dramatic muscle really flexes when she says absolutely nothing.

"Mare of Easttown" gets under your skin in those quiet interludes. From the shots of its streetscapes to its architecture, the images tell the story of a place that feels too close, crowded to the point that Mare can't help but step on a lot of toes without wanting and meaning to. Sometimes those small hurts lead to large fractures, which is what happens with Lori and her husband John (Joe Tippett) and John's brother Billy (Robbie Tann), who are Erin's cousins.

The limited series' finale, "Sacrament," lifts some of that weight from Mare just in time for her to capture Erin's killer, who turns out to be different from what the penultimate episode leads us to believe. This gives Mare space, at last, to actually hold the people who need her most acutely — including her best friend Lori (Julianne Nicholson), who discovers John is having an affair. Again.

A pause for one last bit of warning: From this point on, this story discusses revealing details that will blow the twists for anyone who hasn't seen the finale. So if for some reason you ignored the alert at the top, read no further lest ye be spoiled.

"After a while, you learn to live with the unacceptable," Mare tells a grieving Glen Carroll (Patrick McDade), who is struggling to stay upright after the death of his wife Betty (Phyllis Somerville, in her final role).

Betty was in the habit of calling Mare for small bothers, which Glen takes up — fortunately. He provides a list of things that have gone missing, but then mentions that his gun also went missing for a time only to mysteriously turn up again in the locked shed where he kept it.

It also happens to be the same out-of-production Colt pistol whose bullets were used in Erin's murder.

This would not matter if Mare were simply interested in closing the case, which she had when Lori's husband John confessed to killing Erin . . . after a photo surfaced that shows Erin in bed with the man. That also meant Erin's son was actually John's. He alleged that she threatened to spill that secret, so he killed her.

This is the finale's first twist, since in a previous episode, it was John's brother Billy who was ready to confess to the crime, explaining that they had hooked up at the Ross family reunion. But it was by no means its biggest. Instead, the Colt's finding leads Mare to the only other person with access to Glen's shed: Lori and John's young son Ryan (Cameron Mann), whose anger at his father's latest infidelity led him to pick up a gun and confront Erin.

The ponderous sadness Winslet dumps in to Mare's voice as she calls dispatch to send cars to her best friend's home to pick up the 13-year-old for murder piles another heartbreaking note on a mountain of them. Realizing what this means for Mare is especially devastating when a hysterical Lori tells her she never wants to see her again.

This, after Mare reaches out to the grieving mother of her partner Colin Zabel (Evan Peters), who was shot and killed in the harrowing mission to finding and freeing Katie, only to have the woman slap her in the face.

Mare loses even as she wins.

The eventual and ultimate success of "Mare of Easttown" unifies around Winslet, who magnetized this series from the start, carrying the mystery through its turgid spots and electrifying its finest ones. The latter outweighed the former, because as our familiarity with this small galaxy of characters increased, so did our affection.

Ingelsby and Zobel's choice to end the story in a bright state of grace also makes this the rare kind of show that opens with a tone of encumbering woe but works to takes us to higher ground steadily and with intent.

The smallest calls turn out to matter greatly, and the same is true of the details. Naming the finale "Sacrament" may be the most positively Catholic moment in a show revolving around the most Catholic of families, including a cousin who's a priest that drinks.

The hour begins with a long confession and ends with absolution — for Mare, who at last forgives herself, and for a boy guilty of murder who shouldn't have to lose his innocence.

In the sixth episode she admits she hasn't been up to her house's attic since she found her own son hanging up there. Ending the series by showing her opening the hatch, pulling down the ladder and climbing up lets us know she's found peace. It's a simple frame, free of dialogue as it should be. With that "Mare of Easttown" departs in a way one couldn't have predicted when it began — with a sense that life may still be tough for its heroine, but as she moves through its paces the sun may shine on her, at long last.

All episodes of "Mare of Easttown" are available to stream on HBO Max.