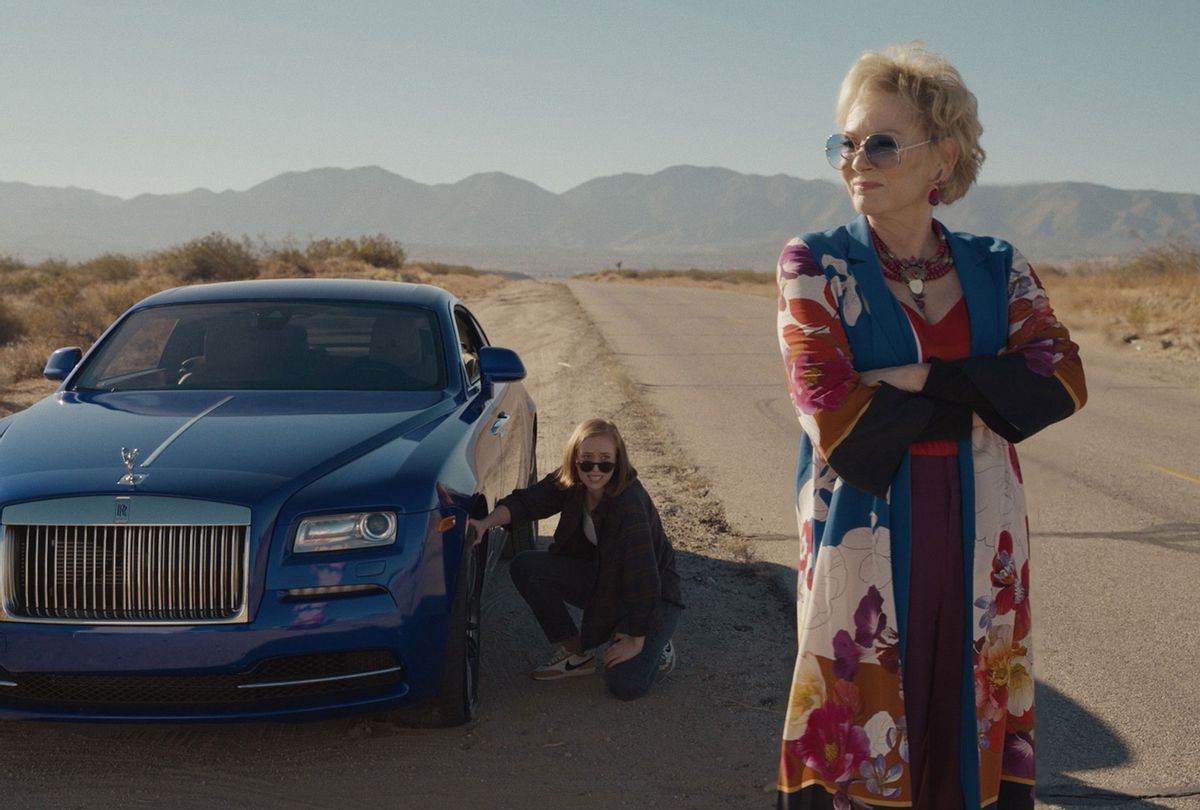 In "Hacks," the dynamic driving Jean Smart's veteran stand-up comedian Deborah Vance and Hannah Einbinder's struggling newcomer Ava is familiar to women or, really, anyone who knows the plot of "The Devil Wears Prada" and recognizes a boss they've survived, former or present, in Meryl Streep's Miranda Priestly.

Smart's Deborah is a relentless professional, always moving, building, never too proud to take whatever opportunities come her way. Ava lands on Deborah's doorstep because she doesn't have anywhere else to go, undone by one bad tweet directed at a right-wing hypocrite that leads to the cancellation of her writing deal and the doors of Los Angeles' comedy clubs closing to her.

Ava is designed to be ungrateful because she is, and to everyone. Her peers detest her because she treated them poorly when her career was going well for her and therefore aren't inclined to reach out a hand to pull her up off the floor. Deborah does, even though she doesn't want to, and immediately begins pounding away at the younger woman's inflated ego. Nothing is off limits. When Deborah flat-out asks Ava if she's a lesbian, the younger woman feigns horror at such a personal question. Then she theatrically breaks down her kink proclivities in detail before concluding, with attitudinal flourish, that she is bisexual.

Ever the expert on timing, a nonplussed Deborah pauses before blurting the punchline. "Jesus Christ! I was just wondering why you were dressed like Rachel Maddow's mechanic."

"Hacks" opens as an intergenerational comedy built on misunderstanding and grievance. Ava views Deborah as a has-been. Deborah sees the new-school comedian as an ungrateful little twerp who never paid her dues, doesn't comprehend joke structure and views Deborah as "the QVC muumuu lady."

Resentment humor is an old sitcom standby that wears out its welcome unless something pulses underneath it, waiting to break out. Maybe that commodity translates as affection. Frequently it's nested in stronger stuff.

Throughout the first four episodes of "Hacks" creators Lucia Aniello, Paul W. Downs and Jen Statsky plant hints as to why Deborah rides Ava so hard, and why she refuses to retire despite having so much cash that she can drop $10,000 on a pepper shaker without batting a lash. But the show's fifth and sixth installments, which debuted this week, are where the answers start to sprout.

In the first of the two new episodes Deborah sets up Marty, the owner of the Palmetto Casino (Christopher McDonald) where the 2,500 shows she's performed on the weekend main stage made her Vegas superstar. Marty is determined to push Deborah aside but underestimates her willingness to fight dirty.

Ava, meanwhile, stumbles into an unforgettable coke- and molly-propelled evening with a handsome stranger who boosts her self-regard, assuring her that she really is as talented and sexy as she believes herself to be. In the throes of their chemical and sexual high she leaves Deborah a voicemail she regrets as soon as she sobers up. That isn't even the worst morning after surprise waiting for her.

From there "Hacks" crosses the bridge from great comedy to a potential classic by demonstrating how behavior that initially looks like spite is, in fact, the rocky foundation from which a respectful, mutually beneficial relationship between youth and experience can rise.

Ava's mistake necessitates her accompanying Deborah on a supposed writing retreat that's actually a weekend stay at a medical spa for wealthy people receiving cosmetic surgery. This time they end up getting stoned on cannabis gummies through which, at long last, they arrive at an accord that has long eluded them.

Deborah loosens up, drops her guard and shares stories she's never told anyone, from #MeToo moments to the truth behind a career-defining crazy story. By the end of their anti-aging getaway Ava persuades Deborah that maybe engaging in her own version of raw honesty is her pathway to a lucrative next chapter. Deborah, however, hails from a generation taught to grin and bear their pain. "Nobody wants to hear me complain about the past," Deborah says, "Also, I told you, nobody believed me," adding that none of her war stories are funny.

Ava's insistent response is where their relationship turns. "You can make it funny," she said. "You can make anything funny."  With these words a new dawn glimmers for this pair, one defined not by resentment but a dedication to understanding each other's worthiness.

Through Deborah and Ava "Hacks" plays out how the transition between youth and maturity creeps up on a person and how often popular culture plays a role in that. That's a nasty little secret nobody broadcasts, probably because one can't predict what form that cruel awakening will take.

Maybe you're minding your own business one day, only to open up your social media feed and discover that you are no longer in your 36-to-41-year-old prime but are now considered a "geriatric millennial."

Here's a related scenario. You pay your dues, maybe sacrificing a slice of happiness in order to make progress, until something terrible happens that you couldn't have foreseen.  We're talking recession, divorce, illness, anything that upends your plans and efforts. Joan Rivers, upon whom Deborah is partly based, was knocked down and got back up despite so many setbacks, including her husband's suicide.

In many cases such reversals mean starting over, and for women it means a narrower range of choices as we age. Aside from a few extraordinary exceptions, most of us will never fully recover, financially speaking. So we take comfort in advice columns urging us to count our blessings, dream big but maybe a little smaller than before. Younger women take our place. Eventually many of them will join us at the back of the cave unless we decide to keep on swinging.

We see this early on when Ava hollowly tries to butter up Deborah by calling her a legend, to which Deborah rolls her eyes and says, "Wow . . . a legend," indicating that at a certain age such compliments transform into insults. Legends are history – as in, done. Over.

Stars, on the other hand, draw crowds, sell tickets and foot spas and cosmetics. They work and therefore, make money. They matter.

Deborah's undoing is at the hands of her husband and former sitcom co-star. He leaves her for her sister; she gets a shot at becoming TV's first woman to host a late-night show. This enrages him. When the house they once shared burns down, he spreads the rumor that a vengeful Deborah lit the match. Suddenly her moment to make history vanishes save for the memory of it, which becomes a suppurating wound bleeding anew when she thinks about what could have been.

But that defamatory myth also helps define her next chapter and eventually makes her the queen of Las Vegas. That never would have happened if ageism and gender discrimination hadn't destroyed what she had at Ava's age. This is not a triumphant observation.

Comedy is cruel, and fame is especially fickle toward female comedians. Ava finds this out when the L.A. stand-up scene spits her out early.

Earlier in "Hacks" Deborah tells Ava that the kid comic doesn't know what "hard" is, and we know what she means because we've already seen a few things Ava hasn't. Like the lunch where Marty first tries to smooth talk Deborah into ceding the stage to make way for a younger, flashier act. Marty is set to die rich regardless of what he does, while Deborah knows that kind of demotion marks the beginning of the end of everything she's struggled to gain.

"I've been playing defense my entire career, thanks to a**holes like you!" she yells, speaking for virtually every woman over 40 who isn't Marissa Mayer, Anne-Marie Slaughter or Sheryl Sanders – women who leaned in, way in, only to realize they could no longer breathe.

So when Deborah tells Ava, "You have to be so much more than good. And even if you're great and lucky, you still have to work really f**king hard. And even that is not enough! " she's doing her a favor.  Millennials, both geriatric and younger, along with the Boomers nobody thinks are OK and the Gen X-ers, are scratching and clawing and realizing, as Deborah says, that "it never f**king ends. And it doesn't get better. It just gets harder." It's nice to hear somebody acknowledge that.

As such, when Deborah follows this by taking off in a helicopter, leaving Ava in the middle of the desert to deal with her broken-down Rolls Royce, there's no question that she deserves that moment as much as Ava does.

The fact that Deborah strong-armed her way back into the saddle is a miracle, and in that luxurious recovery suite the women share, Ava finally appreciates that.

"Hacks" knows all of us start out as some version of Ava but start to identify with Deborah when ageism slaps us in the face, which is around the same time that your hard-earned longevity in the workforce shows up on your resume not as an asset but a liability. Younger women like Ava pulling up on your bumper can feel like a threat, especially when you start competing for the same jobs and more often than not, they win.

Despite all of this, Deborah isn't a vindictive boss by any definition. "Hacks" presents Deborah as a type of mentor offering her example of unrelenting drive, humility and an aggressive defense as the secrets to successful and survival – if Ava can recognize it. Following her desert storm she tasks Ava with organizing mountains of documentation high as the Sierra Nevadas, a treasure trove of Deborah's jokes and accomplishments captured on video and paper.

Some so-called "geriatrics" may recognize this exercise for what it is: Wax on, wax off. Paint the fence. Sand the floor. "It's all material, honey," Deborah deadpans.

Every show or movie built to hold up over the years contains some kind of lens through which we're meant to see ourselves as we are or as we could grow to be. At some point the teens or 20somethings who cheered on Anne Hathaway's "Devil Wears Prada" character might return to it years later and be shocked to discover they relate, to some degree, to Streep's terrible boss.

They should know that TV has more positive woman boss, woman employee relationships  viewing generational differences as beneficial, from the supportive editor on Freeform's "The Bold Type" to the friendship between a 20something professional and the subordinate she doesn't realize is much older than she appears to be on "Younger." Marsai Martin's film "Little"  transforms the unforgiving boss/trod-upon employee dynamic at the end by having the boss admit to her unappreciated, long-battered assistant that she saw the younger woman as a threat.

But from the start "Hacks" shields Deborah from such comparisons by showing her respecting those who give respect and fending off all those who don't. After her most recent skirmish Deborah celebrates her victory, won by fighting filthy, by getting wasted on dirty martinis, after which she stumbles upon high-flying Ava who is, to Deborah's shock, wearing a dress for once. "When I was doing a stand-up at your age, I had to wear a dress and heels," Deborah slurs.

"OK well, I'm sorry I don't have to," Ava seethes before asking, in a serious tone, "Are you, like, mad at me for that?"

Deborah drunkenly casts her gaze upward, searching the ceiling tiles for an answer before stating the obvious: "Yes."

Fair enough. But that doesn't have to stop these two women from teaming up in a battle better fought together than alone . . . and against each other.

New episodes of "Hacks" premiere every Thursday on HBO Max.