Joan Rivers gets her (scary) close-up

Can a new documentary make the groundbreaking female comic -- and avatar of self-hatred -- a star one more time? 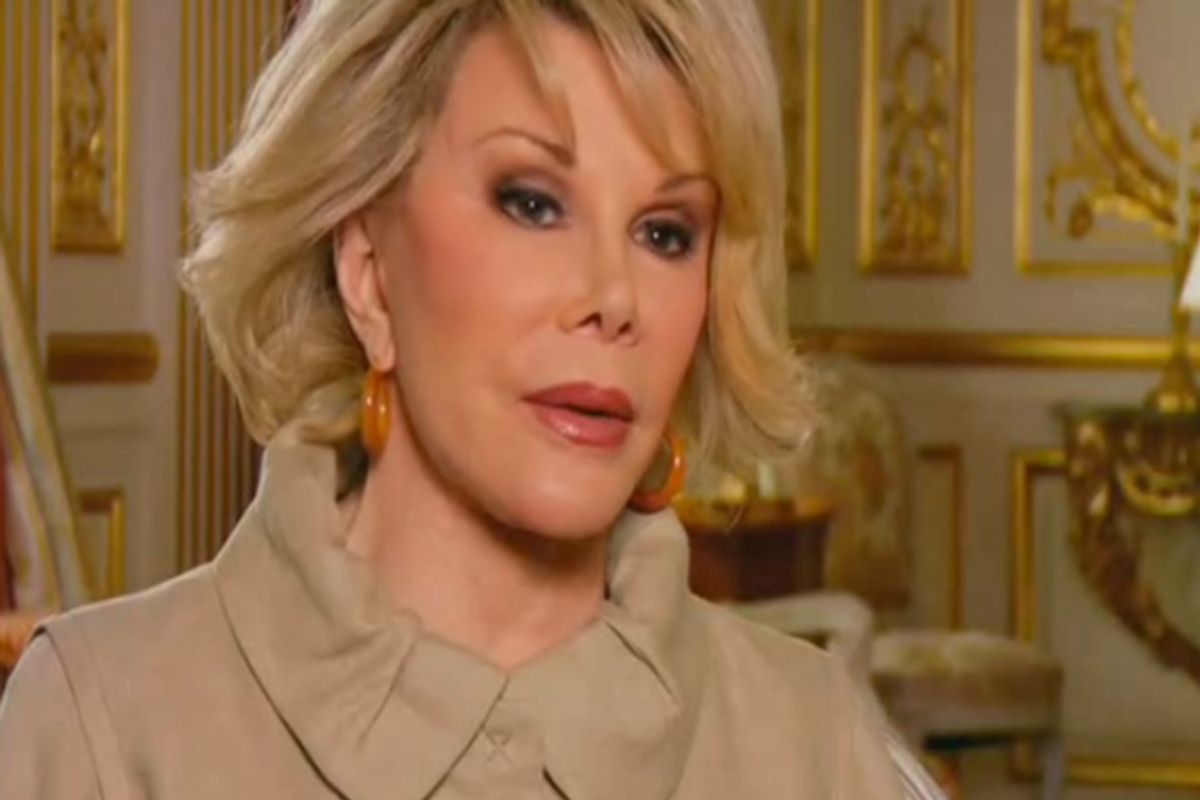 Crushed by the hostile London reviews of what at first looked like a hit show -- her autobiographical play, "Joan Rivers: A Work in Progress by a Life in Progress" -- the veteran comedian takes a moment to explain something to the documentary filmmakers who've been following her around. Say what you like about her comedy, she says; she doesn't care. (This is Rivers-rhetoric and as such completely not true, but never mind.) But if you say she's no good as an actress, you have wounded her. "My whole career is an actress' career," she says in that distinctive Brooklyn-Jewish growl. "I'm an actress who plays a comedian."

It's a revealing remark and staged as such, but like so much in Ricki Stern and Annie Sundberg's riveting documentary, "Joan Rivers: A Piece of Work," it raises more questions than it answers. Because Rivers the actress -- born 77 years ago this week as Joan Alexandra Molinsky, the daughter of Russian immigrants -- isn't just playing any comedian. She's playing Joan Rivers, an undigested, gristly lump of misanthropy and female self-hatred who has built a career out of shamelessness, uncensored bad taste and a strange combination of starfucking and utter contempt. (Also, just to be clear, out of her exquisite comic timing and her mental agility.) If this is just a role, it's the performance of a lifetime, and more convincing than Olivier playing Hamlet.

Late in the movie, when Rivers is struggling to find gigs, she suggests to her manager that she'd knock out her own teeth in order to do a denture-cream commercial, and if she's kidding it's not by much. She's a relentless and obsessive showbiz professional and self-salesperson who once appeared, along with her daughter Melissa, in a third-rate TV movie that dramatized her own husband's real-life suicide and its aftermath. (Acting out the trauma on camera helped her and Melissa "move forward," she tells Stern and Sundberg, and I think she's being utterly sincere.) After the apocalypse, when the rest of us are ashes, Rivers will crawl into an empty concrete culvert somewhere and find an audience of beetles and cockroaches. They're used to being abused.

With the release of Stern and Sundberg's film, which has been a year-long sensation on the festival circuit, I guess Rivers is ready for her close-up, and you can't say she hasn't earned it. (Let's just skip over the plastic surgery joke suggested by that last sentence, shall we?) There's no doubt Rivers was and is a female showbiz pioneer, beginning with her late-1950s emergence as a skinny, awkward stand-up comic with a grating accent and a dubious blond dye job, who ventured into subject matter most of her male peers wouldn't touch. She told jokes about abortions ("appendectomies," she'd say on TV) when they were widely illegal, and used to close monologues by explaining that Hollywood success was all about the casting couch: "My name is Joan Rivers, and I put out."

Rivers became a constant foil for Johnny Carson, who loved to play Midwestern straight man to her risqué city-girl gags, and by the early '80s was institutionalized as official "guest host" of Carson's "Tonight Show." In 1986, the then-new Fox network lured Rivers away to host her own late-night show opposite Carson, a move that proved personally and professionally disastrous. The show was plagued with problems from the outset, and Fox canned Rivers after she refused to fire her husband and producer, Edgar Rosenberg, who killed himself the following year. Carson never spoke to her again, and by Rivers' possibly exaggerated account, got her blackballed by NBC for more than 20 years.

When Rivers talks about Rosenberg's death and the loss of her mentor relationship with Carson, it's obvious that the pain is still with her. Stern and Sundberg definitely fulfill the Prime Directive of every celebrity documentary, which is making a famous person -- especially one the audience "knows" and has strong feelings about -- seem recognizably human. Rivers can be an intelligent and even reflective person offstage, and in that sense the practiced shock-shtick of her stand-up act -- wherein she calls her own daughter a "stupid fucking cunt" for refusing to pose nude in Playboy, or discusses her own fondness for anal sex ("You can do other things! You can click on e-mail! You can read a magazine!") -- is just an act.

But as that TV movie about Edgar's suicide ("Tears and Laughter: The Joan and Melissa Rivers Story") indicates, there are no real lines of demarcation, in Rivers' world, between private life and her showbiz career. Perceived rejection by her parents, by men, by Carson, by NBC, by Fox, by New York (after the failure of her Broadway show "Fun City" in 1972), by the entire entertainment industry -- it's all fuel for the aggrieved, über-bitch Rivers stage persona. She agreed to do this film, a cinéma-vérité "year in the life" that follows her from the London stage to a stint on Donald Trump's "Celebrity Apprentice" to a heckler-plagued gig at an Indian casino in northern Wisconsin, fully understanding that she might not look that great. But even more than that, she understands that the only currency of celebrity is visibility.

Stern and Sundberg are not celebrity chasers; their previous films include "The Devil Came on Horseback," about the massacres in Darfur, and "The Trials of Darryl Hunt," about a man wrongfully incarcerated for rape and murder. They're making a case here for Rivers' importance, kind of, but they don't shy away from her most embarrassing moments, as when she suggests a Michelle Obama joke to her crew of writers: "In the '70s we had Jackie O. Now we have Blackie O!"

One supposedly key moment in the film occurs in that Wisconsin casino, when a man in the audience challenges her about a mean-spirited Helen Keller joke: "It's not funny if you have a deaf son!" Rivers is quick on her feet and eloquently shouts him down, arguing that comedy is about making us able to face the most painful and awful aspects of life. She's right about that, which momentarily makes you forget that she's yelling at some poor bastard out in Podunk over a Helen Keller joke, which would have seemed tired, small-minded and painfully unfunny if Rivers had used it on "The Mike Douglas Show" in 1966.

I came away from "Joan Rivers: A Piece of Work" feeling that, yeah, Rivers is an undeniably impressive and important phenomenon, a tenacious survivor and one of the last links to a bygone era. You could say the same thing about a living Tyrannosaurus rex, and I still wouldn't want to meet it. Rivers has prospered in comedy as a human Rorschach blot who embodies the most toxic forms of female self-loathing, an unfortunately familiar formula for successful women. She's the Maggie Thatcher of stand-up.

I understand that there's something gratifying and therapeutic about expressing forbidden thoughts, and Rivers clearly has a unique ability to reach female audiences with her funniest material. She says she misses the childbirth era of yore, when women were knocked out and woke up only to smoke cigarettes, drink martinis and ask the doctor questions: "Is the baby normal? OK, good." (Drink, smoke, repeat.) "Is he white? OK, good. The marriage goes on."

The other side of that coin, however, is watching a 70-something grandma with a scary mask-face sitting on the floor of an amazingly vulgar New York apartment ("It's how Marie Antoinette would have lived if she'd had money") trying to write a gag that involves the phrase "vaginal farts." Maybe Joan Rivers is a high-powered engine of self-debasement who will go lower than anyone else for a laugh and a dollar, and maybe she's a skilled actress who has spent her whole life playing one. Either way, yes, she's quite something. And I'd rather appreciate her from a distance.