The Tulsa Massacre, race and America: I finally understand my personal stake in writing this history

My work to help restore the history of the Tulsa Massacre is closely connected to my friendship with Mr. Rogers 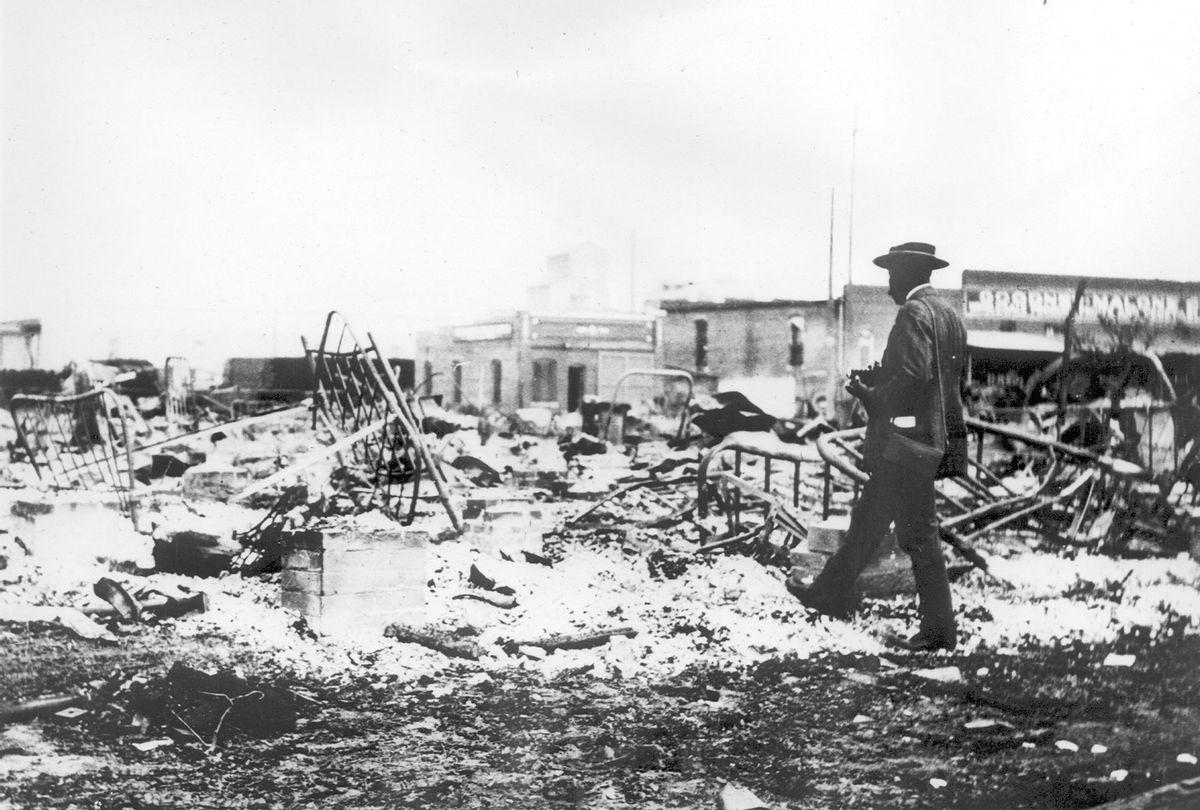 An African-American man with a camera looking at the skeletons of iron beds which rise above the ashes of a burned-out block after the Tulsa Race Massacre, Tulsa, Oklahoma, June 1921. (Oklahoma Historical Society/Getty Images)
--

At first glance, two of the dominant narratives of my personal and professional life would have little in common. The first is my close friendship with Fred Rogers, the icon of children's television, that began in 1995 and lasted until his death eight years later. The second is my work as a writer over the last 20 years to help restore the Tulsa Race Massacre of 1921 to history.

But in recent weeks, as the centennial anniversary of the Tulsa tragedy approaches, I've realized that there is an important nexus between the two stories. Allow me to briefly explain.

I met Fred in the fall of 1995 when I was profiling him for my Texas newspaper. He and I became close friends then, and in a letter to him the following summer, I laid out the details of what was a very difficult period of deep depression. At the heart of it all, I told Fred, was this sense that all my life I had been trying to get my father to be proud of me, but had always felt I had come up short. So I asked Mister Rogers this somewhat desperate question, "Would you be proud of me?" Fred's answer was one for the ages. (He said, "Yes," of course, and much more.)

But not long after that healing exchange, Fred wrote to ask me about my dad. What was his childhood was like? I told my friend that I didn't really know because I had never really inquired. Then I started to, and what I learned about my dad's early years broke my heart — it was a time of deprivation and neglect. I also understood for the first time that he had given me so much more than his father had given him.

The point here is that learning my dad's story fundamentally changed the way I looked at him. For the first time I saw my father as a person, as another suffering human being, not as the godlike figure of my youth. In addition to his shortcomings, I came to appreciate his kindness, devotion, integrity and so much more. When he died of Alzheimer's disease a decade ago, all I felt was the most pure and profound sorrow.

Which brings me to Tulsa. I was raised in a small town in the Upper Midwest where there were no African American residents. I grew up oblivious to our country's racial history, perhaps willfully so. That continued to be true after I moved to Texas and started to live and work around people of other ethnic backgrounds. Race just wasn't relevant to me, I thought.

Then, in early 2000, I first learned of the Tulsa Massacre, when a white mob numbering in the thousands obliterated one of America's most prosperous African American communities, leaving hundreds dead, thousands homeless, and emotional and economic scars that linger today. I first wrote a newspaper story about the massacre, then a book called "The Burning," learning then that what happened in Tulsa was not some horrible one-off, but completely consistent with that time in the United States.

Similar atrocities had been perpetrated in cities and towns across the United States, albeit not quite on that scale. In some American communities, lynching was a spectator sport. African American veterans of World War I were strung up in their uniforms. The nation's first movie blockbuster, "Birth of a Nation," was a celebration of the Ku Klux Klan, invoking the most odious racial stereotypes. The 1915 movie by filmmaker D.W. Griffith was endorsed by President Woodrow Wilson and the chief justice of the U.S. Supreme Court. Not to mention the only slightly more subtle and dehumanizing back-of-the bus aspects of the Jim Crow era, separate drinking fountains, restrooms, movie theaters and on and on.

I was initially horrified by what I learned. But as my education continued, I noticed that something else was occurring inside of me, this previously oblivious white boy from northern Minnesota. I was beginning to look at people different than myself in a new way, with greater curiosity and compassion. What was it like to grow up in families and communities that had suffered that way? I also came to appreciate that a terrible wound existed just below the surface of our society, one that was largely unaddressed, and I became committed to do what I could to help in the healing.

Yet it wasn't until recently that I more deeply understood my own feelings. It wasn't until I made the connection between Fred Rogers, my dad, and my feelings about race. I realized what had occurred in both instances was that through learning the history, I allowed the humanity of others to be revealed. I also discovered a deeper humanity in myself.

I've long had this theory—that the hearts of millions of other white Americans like me, people of good will, will be changed, as mine was, when they learn the true nature of racial history in the United States. Too many remain unaware.

Today there is much talk about how to confront systemic racism in the United States. That is as it should be. But when it comes to racial healing and reconciliation, I think we are missing a necessary step. It is so important that Americans, particularly white Americans, take it upon themselves to learn the real story of race in our nation.

It is not an easy or pleasant task, given that history's painful nature. But neither need it be an exercise of guilt or blame or white shame. Fred Rogers famously said that it's much easier to love someone when you know their story. It occurs to me now that's why he asked me about my dad. He wanted me to learn the story. I hear his voice now, in this moment in our history, regarding race.

I think we owe it to ourselves to learn. And only good things can come from a journey to discover a common humanity. I'm convinced that it is in that journey that true solutions will be found.

Tim Madigan is the author of "I’m Proud of You: My Friendship with Fred Rogers" and "The Burning: The Tulsa Race Massacre of 1921." A new edition of "The Burning" and an edition for young adults are out now.