Amazon, Facebook and other tech giants paid almost $100B less in taxes than they claimed: analysis 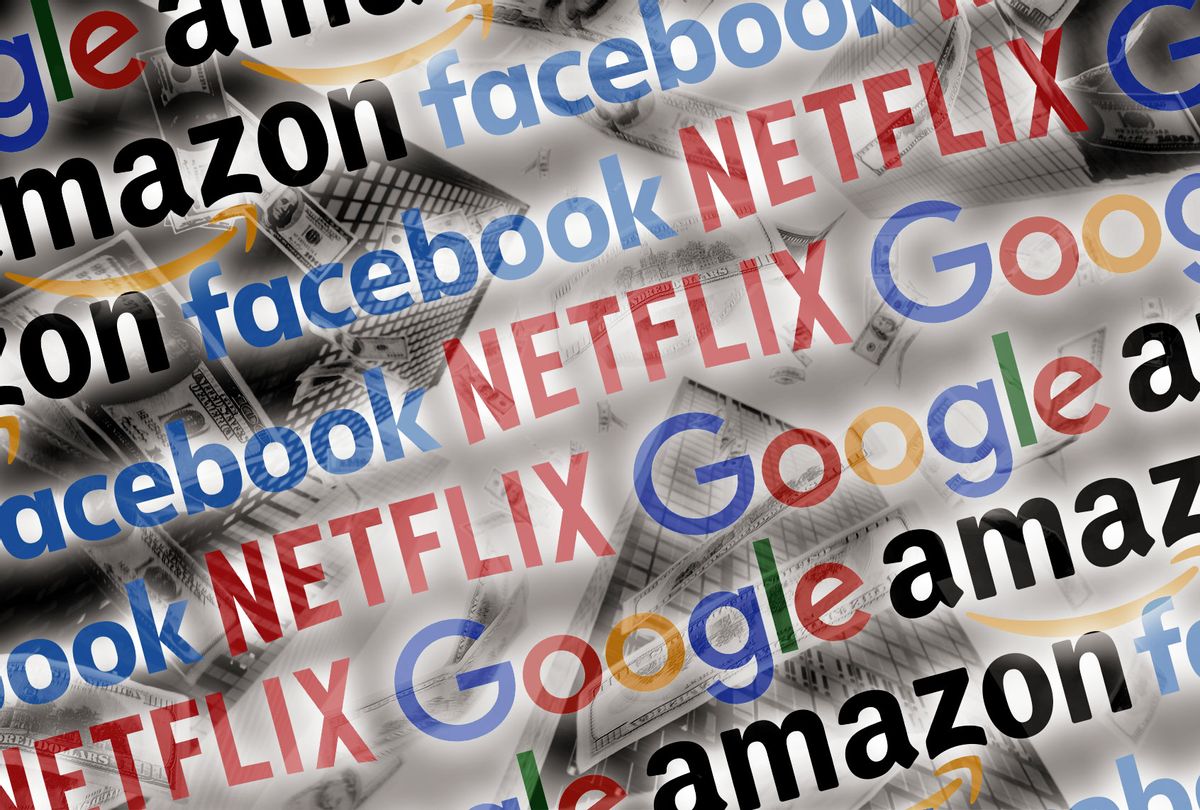 Bolstering demands for a global minimum tax to rein in corporations' evasive tactics, a new analysis released Monday showed that a half dozen Big Tech companies based in the United States paid almost $100 billion less in taxes over the past decade than stated in their annual reports.

Between 2011 and 2020, Amazon, Facebook, Alphabet (the owner of Google), Netflix, Apple and Microsoft — known as the "Silicon Six" — paid roughly $219 billion in income taxes, which amounts to just 3.6% of their $6 trillion-plus in total revenue, according to the Fair Tax Foundation. Income tax is paid on profits, not total revenue, and researchers said these tech giants are adept at reducing their tax liabilities by shifting profits to offshore tax havens.

Had the "Silicon Six" paid the prevailing tax rates in the countries where they operate, they would have given global tax authorities over $149 billion more than they did over the past decade, researchers said. Moreover, not only did these corporate behemoths fork over nearly $150 billion less than would be expected under a stronger international taxation regime, but they also inflated the value of the tax payments they did make.

According to the Fair Tax Foundation, these six companies reported paying approximately $315 billion in income taxes between 2011 and 2020, which is 23.2% on nearly $1.4 trillion in profits. That's significantly higher than the 16.1% rate the companies actually paid over the past decade, however, resulting in a gap of more than $96 billion between tax figures cited in annual financial reports and real contributions to public revenues.

Paul Monaghan, chief executive of the U.K.-based nonprofit, said the study provided "solid evidence that substantive tax avoidance is still embedded within many large multinationals and nothing less than a root-and-branch reform of international tax rules will remedy the situation."

None of the six corporations "is an exemplar of responsible tax conduct," the report noted. "However, the degree of irresponsibility and the relative tax contribution made does vary. Amazon has paid just $5.9 billion in income taxes this decade, whilst Apple has paid $100.6 billion and Microsoft has paid $55.3 billion."

The Fair Tax Foundation identified Amazon and Facebook as the worst offenders, prompting responses from the two tech giants.

As The Guardian reported:

An Amazon spokesperson disputed the calculations as "extremely misleading."

"Amazon is primarily a retailer where profit margins are low, so comparisons to technology companies with operating profit margins of closer to 50% is not rational," the company said. "Governments write the tax laws and Amazon is doing the very thing they encourage companies to do — paying all taxes due while also investing many billions in creating jobs and infrastructure. Coupled with low margins, this investment will naturally result in a lower cash tax rate." ...

A Facebook spokesman said: "All companies pay tax on their profits, not revenues. Last year we paid $4.23 billion in corporate income taxes globally, and our average effective tax rate over the last 10 years was 20.71%, which is roughly in line with the OECD average."

In response to the corporations' complaints, the Fair Tax Foundation said that the majority of Amazon's profits in the last three years were derived not from retail but from cloud services, where profit margins are between 25 and 30%. The Fair Tax Foundation also noted that over the past decade, Facebook paid an income tax rate of just 12.7%, resulting in substantially lower contributions than would be expected according to prevailing corporate tax rates as well as the company's effective tax rate.

The Fair Tax Foundation's new analysis comes just weeks after IRS Commissioner Charles Rettig admitted that tax dodging is depriving the U.S. government of as much as $1 trillion or more per year.

Monaghan said that Treasury Secretary Janet Yellen's recent push for a global minimum tax on corporations "[lit] a fire beneath the multilateral discussions that have been slowly progressing under the auspices of the OECD."

According to Monaghan, the Biden administration's proposals for global tax reform "would see many of the incentives underpinning profit-shifting to tax havens removed, and would see the very largest multinationals taxed not just on where subsidiary profits are booked, but where real economic value is derived."

"This would have a seismic impact on the likes of Amazon, Apple, Facebook, Google and Microsoft (who have tax dodging hard-wired into their organizational structure), with billions of additional taxes paid across the world," Monaghan continued.

"We could be on the cusp of a once-in-a-generation moment," he added, "but world leaders at the forthcoming G7 and G20 world leader summits need to grasp the nettle, step up and engage with the agenda much more positively — the benefit to public services across the world could be immense."