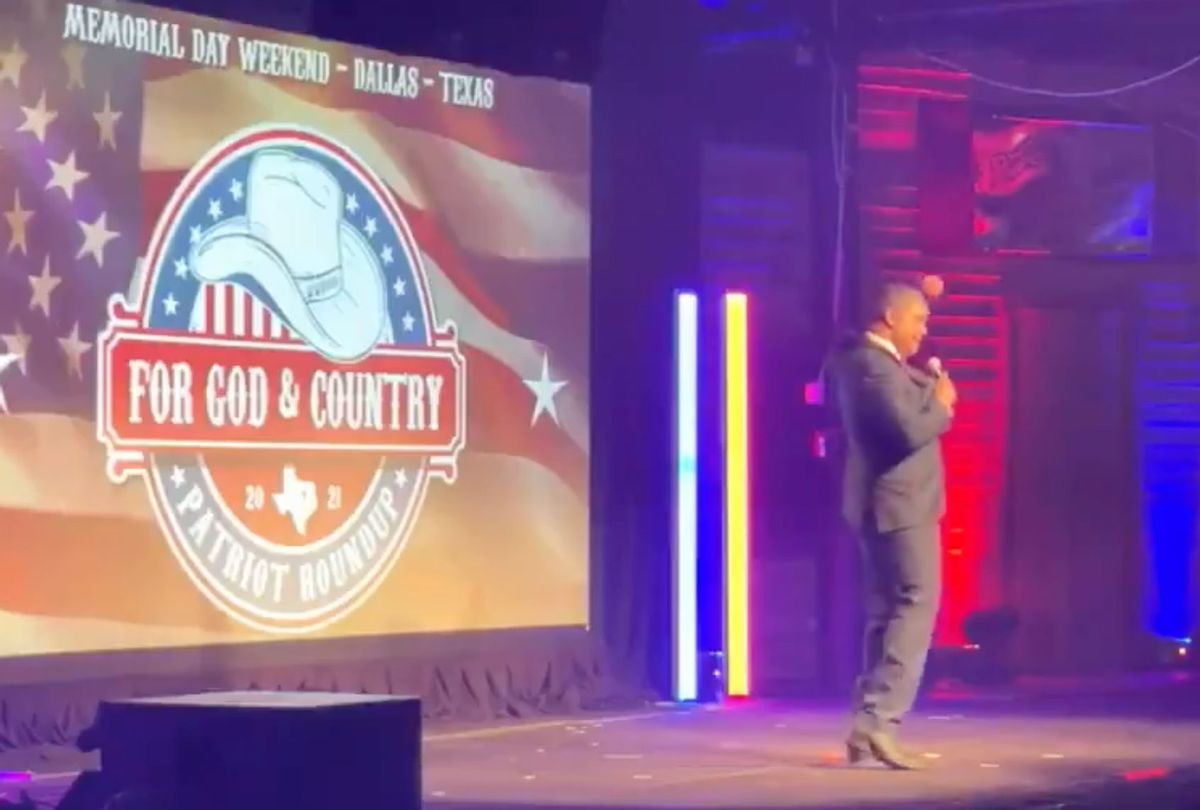 Screengrab of Jason Sullivan, Roger Stone’s social media advisor, making a noose gesture in reference to Hilary Clinton and getting applause from the Dallas Patriot Round Up attendees. (Twitter/@MC_Hyperbole)
--

Jason Sullivan, a self-proclaimed social media expert and former associate of longtime Republican operative Roger Stone, hinted during a far-right conference over the weekend that Hillary Clinton should be hanged.

During his speech on Saturday, Sullivan called Clinton a "godawful woman who shall not be named," then made a noose in the air around his neck, seemingly referring to the killing of Clinton.

Upon the completion of the gesture, the crowd jeered in delight.

Here is Jason Sullivan, Roger Stone's social media advisor, making a noose gesture in reference to Hilary Clinton and getting applause from the Dallas Patriot Round Up attendees. pic.twitter.com/JknaK9PLbj

When contacted by Salon regarding the remarks made by Sullivan, Stone claimed on Tuesday afternoon that "Jason Sullivan is not and has never been my social media adviser," before admitting he had hired Sullivan.

"He was hired by my company to utilize what he claimed were proprietary programs on Twitter which in fact violated Twitter's rules and resulted in the deletion of everyone I was following on Twitter at the time," Stone said. "He was terminated after 30 days. I am not responsible for anything Jason Sullivan says. Report otherwise, and I'll see you in court."

In a 2018 report, the Independent described Sullivan as "a social media consultant who advised Mr. [Roger] Stone on his pro-Trump political action committee during the [2016] election."

The Dallas event where Sullivan was speaking, dubbed the "For God & Country Patriot Roundup," featured a cast of headliners from the right-wing fringe, including Trump's former national security adviser, Michael Flynn, and onetime Trump lawyer Sidney Powell, who repeatedly failed to release the "Kraken" in a series of election-fraud lawsuits.

During the four-day gathering, Flynn made headlines of his own for suggesting that a military coup in the United States, might be a good idea. One attendee, referencing a recent coup in the Asian nation of Myanmar, asked Flynn, "I want to know why what happened in Myanmar can't happen here?" The former national security adviser replied, "No reason. I mean it, it should happen here."