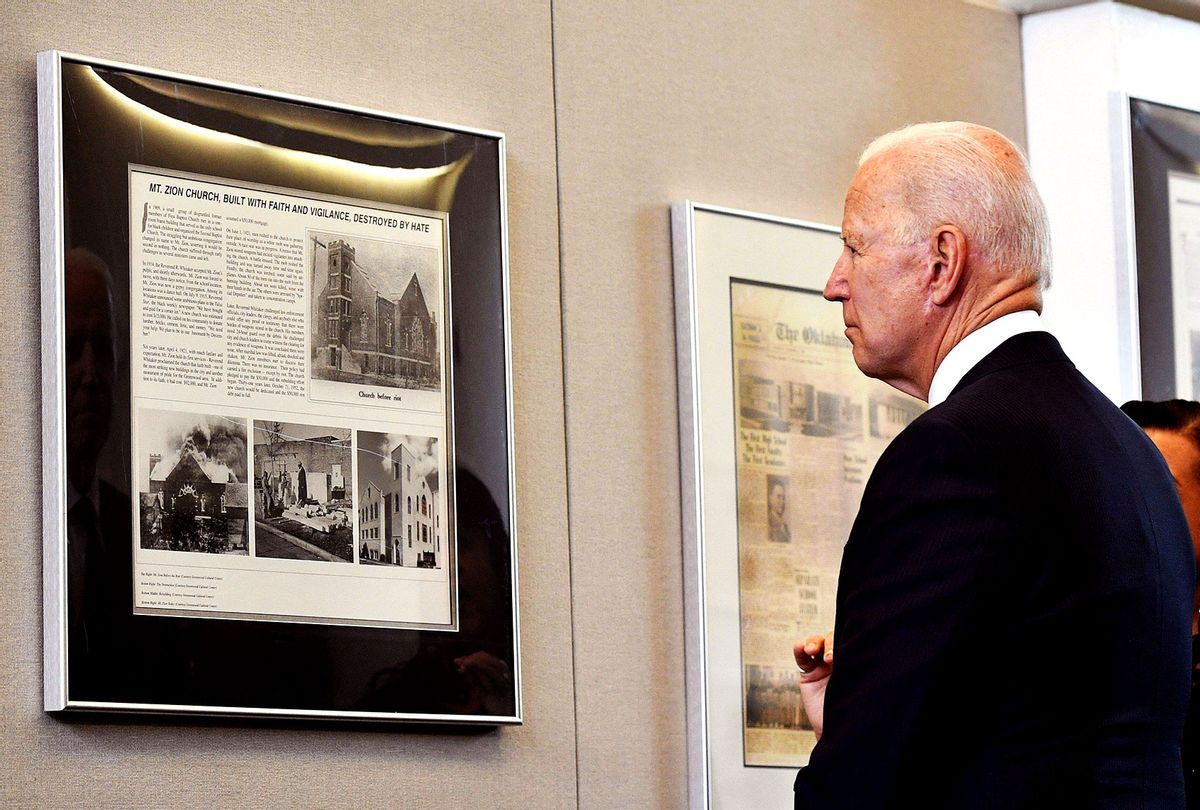 US President Joe Biden tours the Greenwood Cultural Center in Tulsa, Oklahoma on June 1, 2021. - US President Joe Biden traveled Tuesday to Oklahoma to honor the victims of a 1921 racial massacre in the city of Tulsa, where African American residents are hoping he will hear their call for financial reparations 100 years on. (MANDEL NGAN/AFP via Getty Images)
--

The Biden administration rolled out a plan to address America's startling racial wealth disparities ahead of the president's trip to Tulsa to observe the centennial of the white supremacist massacre in that city. But racial justice advocates say it's missing a key component: student debt forgiveness.

Biden is expected to lay out his plan on Tuesday, when he will become the first president to visit Tulsa to commemorate the attack on the community of Greenwood, a prosperous neighborhood known as Black Wall Street where white people slaughtered as many as 300 and destroyed more than 1,200 homes in 1921.

"The attack on Black families and Black wealth in Greenwood persisted across generations," Biden said in a statement on the anniversary of the attack Sunday. "The federal government must reckon with and acknowledge the role that it has played in stripping wealth and opportunity from Black communities."

The administration said Tuesday that the plans include a Housing and Urban Development rule intended to address discriminatory housing practices and racial inequities in home appraisals, according to CNN. Biden will also announce a plan to provide $100 billion in new federal contracts for "small, disadvantaged businesses," many of which are owned by Black people.

Black families on average have just one-tenth of the assets of typical white families, according to the Brookings Institution, in large part due to longstanding segregation and housing discrimination, since home value makes up the majority of most families' assets.

NAACP President Derrick Johnson criticized Biden's plans to address racial wealth disparities for not including any measures to tackle the student debt crisis.

"Until we address the student loan debt crisis, which disproportionately impacts African Americans, we can never get to the question of home ownership, therefore accumulating wealth," Johnson told Politico.

Senate Majority Leader Chuck Schumer, D-N.Y., and progressive Democrats have pushed Biden to forgive up to $50,000 in student debt with an executive order. Biden has said he supports legislation by Congress to eliminate up to $10,000 in student debt, but pushed back on arguments that he can do so himself. The administration promised an Education Department review to determine Biden's legal authority on the matter but months later there is no word when the review may be completed. Biden did not include student debt forgiveness in his $6 trillion budget proposal.

Black students are more likely to have to borrow for college than white students, according to the Federal Reserve Bank of New York, and Black college graduates owe an average of $25,000 more in student loan debt than white graduates, according to data from the National Center for Education Statistics.

"The American Families Plan, which is included in the president's budget, includes a historic $46 billion of investments in HBCUs, tribal colleges and universities and minority-serving institutions," she said Tuesday. "These institutions are critical to helping underrepresented students move to the top of the income ladder. President Biden is calling for a historic investment in affordability through subsidized tuition and expanding institutional grants."

The White House also said that Biden would not support reparations for the descendants of the Tulsa massacre, which the last living survivors, along with many racial justice advocates, have called for. The city still has no official death toll from the massacre and has resumed excavation efforts to find reported mass graves. Thousands of Black residents were displaced, often to other states. But the Tulsa Race Massacre Commission, which was authorized by the Oklahoma state legislature in 1997, concluded that Black Tulsans lost the equivalent of $27 million in the attack and called for direct reparations of up to $150,000 per family. No reparations have been paid.

Viola Fletcher, 107; her brother Hughes Van Ellis, 100; and Lessie Benningfield Randle, 106, three of the remaining survivors of the massacre, are leading a lawsuit against the city, county and state of Oklahoma seeking reparations, arguing that city police and the county sheriff "deputized and armed white Tulsans to murder," and the state National Guard "participated with this angry white mob in killing and looting and destroying the property of Black residents of Greenwood."

All three appeared before the House Judiciary Subcommittee on the Constitution, Civil Rights and Civil Liberties earlier this month to push for federal reparations and recognition of the massacre, which has largely been scrubbed from American history books.

"I have lived through the massacre every day,"  Fletcher told lawmakers. "Our country may forget this history, but I cannot. I will not. And other survivors do not. And our descendants do not."

"Please do not let me leave this earth without justice," added Ellis, a World War II veteran, "like all the other massacre survivors."