"I'm not tough": Jennifer Jason Leigh on her career playing challenging roles nothing like herself

The actress spoke to Salon about her new horror series, "Lisey's Story," an adaptation of Stephen King's novel 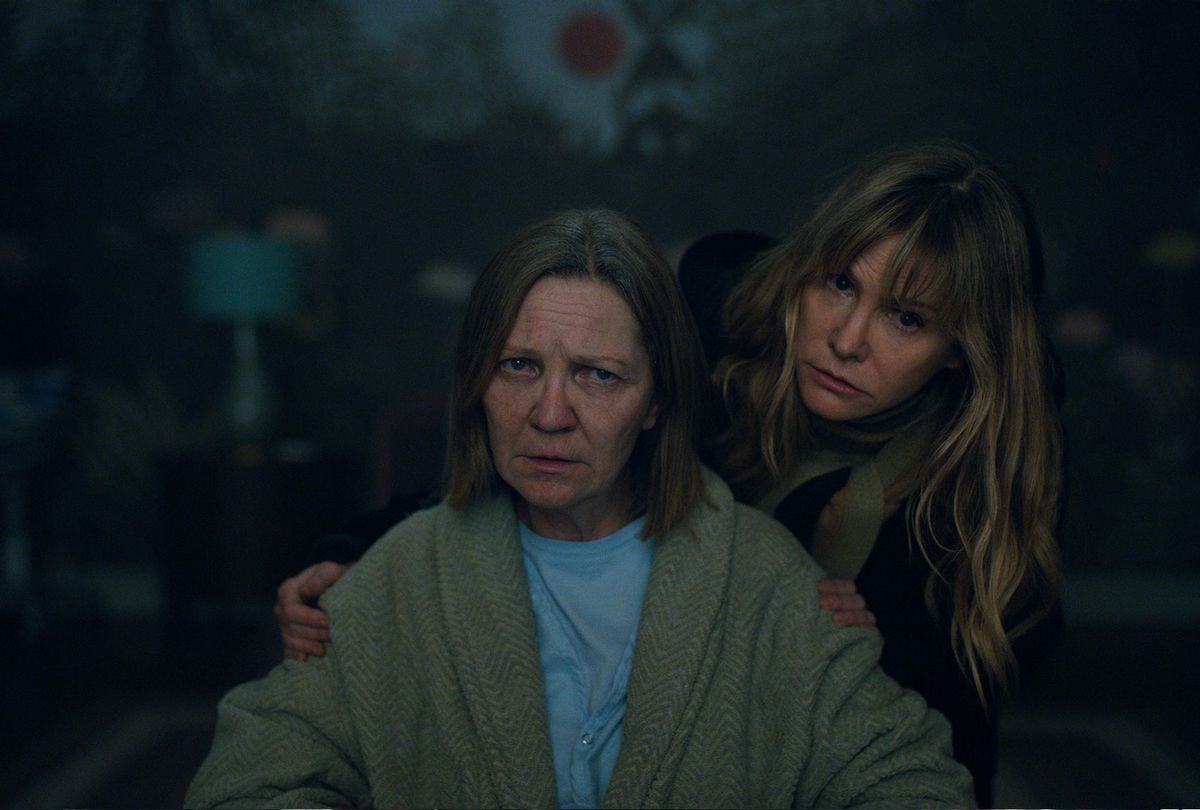 Jennifer Jason Leigh is a tough cookie as Darla, the sister of the title character in "Lisey's Story," a new AppleTV+ series written by Stephen King (adapted from his novel) and directed by Pablo Larrain ("Neruda").

Darla is supportive and fiercely protective of Lisey (Julianne Moore), the widow of Scott Landon (Clive Owen), a successful novelist who, as the series opens, has been dead for two years. Lisey is being threatened by an obsessed fan (Dane DeHaan). Meanwhile, Darla's other sister, Amanda (Joan Allen), is self-harming and catatonic; she is soon hospitalized. How Darla navigates her relationships with each sibling provides Leigh with several opportunities to express Darla's palpable emotions.

Since her breakout role in "Fast Times at Ridgemont High," Leigh has commanded viewers' attention with the characters she plays, from Tralala, the sex worker in "Last Exit to Brooklyn," and Hedra Carlson, the roommate from hell in "Single White Female," to her Dorothy Parker in "Mrs. Parker and the Vicious Circle" and her Oscar-nominated turn in "The Hateful Eight."

Leigh's talent, and what makes her so captivating on screen, is her steely determination. Her Darla is no-nonsense, and a scene of her raging at the hospital staff shows the extreme frustration she feels. But she also provides moments of sarcasm and deadpan humor in the series. Leigh chatted with Salon about "Lisey's Story" and how she is unlike most of the characters she plays.

This is the second Stephen King adaptation you've done, following "Dolores Claiborne." What appeals to you about his work in general and his characters in particular?

I think his characters are always flawed and complicated and very interesting — you are really drawn in. And the worlds are so surreal and horrific or thrilling. And he's incredibly prolific; it just boggles the mind. I started reading his books when I was a young teen, and they had a big impact on me — as they did for so many people. It was really nice to be a part of this one because I know it's very personal for him. He loves his stories so much. That had a certain pressure to it.

He was on set, I understand. Did you talk with him about your character?

He did talk about Darla with me. He was open and enthusiastic, and easy to talk to. And nice! I think you're just intimidated when you meet someone that you have been reading their books and looking at the movie adaptations of their novels for most of your life.

I got the impression that Darla is jealous of her sisters. How do you see her? What do you think motivates her?

I think there are petty rivalries and jealousies with her sisters. I see Darla as — it's a bad metaphor — when you go to a birthday store and buy balloons, she's the rock that holds the balloons down so they don't fly off. She doesn't get all the attention. There is nothing magical or special or beautiful about her, but she's not going to fly off. She's going to keep everyone grounded as best she can because that's her job. And along with that, does come some resentment. She's been doing this for so long. They are not little girls anymore, but their childhood still influences who they are as women, and the ties they have to one another.

Yes, we all have dealt with difficult people and you have that feeling, "life's too short." But the only way to get through it is to rise above. You can't engage in a certain way because — how can you with some people? It's just impossible, and it's not going to get you anywhere.

The series features many scenes of what the characters call "magical surrealism." Darla seems pretty grounded in reality. What are your thoughts about parallel or alternate worlds?

Darla doesn't believe in any of that. I would love it to be true. I love those movies. I love science fiction and all of those theories — and perhaps it is. Do I personally think . . . nah! But what do I know?

Darla is the practical sister. What can you say about developing your relationship with your onscreen sisters?

Pablo just made us feel like sisters right away. I don't know exactly how he did it, but there was something about giving us the feeling that he believed in all of us and accepted all of us for who we were. He really wanted this to be so real and, without judgment, have all those different feelings at play all the time — which is what it is with sisters. There are so many deep feelings.

Pablo encourages how people are. Darla is pragmatic, but she also desperately wants to connect to her sister without all that history that's there and some of it's not pleasant and not good. And that lion thing that comes out when someone you care for isn't being protected in a place you sent them for protection. All that stuff is fun to play and makes it a much richer character and experience.

There is a line in the series, "By the work you shall know them," referring to Scott Landon's output. What do you think folks would know about you given the films and TV series you've made?

You don't think the projects you choose reflect who you are?

No, not really. I am so different than the characters I play usually. I feel like I'm straightforward, I'm introverted. I don't like drama in my life, I like it in movies. If people are just looking at my movies, they might get a very different sense of who I am as a person. I mean, what would you say? I'm curious.

I think you're brave and fearless because you take a lot of challenging parts. You're fascinated by characters who are a little on the edge. In "Single White Female," you embodied that character. Dorothy Parker was perfect casting for you. You have that acerbic wit. Tralala in "Last Exit to Brooklyn," was a stunning performance.

I'm actually a lot closer to Lisa in "Anomalisa" though. Or Susie in "Miami Blues." Those characters are more . . . I'm not tough at all. I'm very no-nonsense, but in real life, I'm vulnerable. I can play tough because I didn't get to be tough. I saw a lot of tough around me. It's fun for me to play extroverted and all these people that I'm not like in my real life. I'm observant.

You have long been an indie film darling, and have worked with some amazing filmmakers, from Robert Altman, the Coen Brothers and David Cronenberg to Todd Solondz, and Jane Campion and Charlie Kaufman. Did you work at having such a deliberate or "idiosyncratic" career?

Pablo is incredible and an amazing director. He's so sensitive and deep and kind and open and yet incredibly specific. You just want to talk with him forever. You realize you are really talking to an artist and someone who cares so much, and his vision is very unique.

Given the plot of the series, can I ask if you have any memorable encounters with fans?

Not really. I had the weird experience of someone coming up to me saying "Hi, how are you?"  And I didn't recognize him. And he said, "We worked together on 'Last Exit to Brooklyn,' I was one of the guys on the dock [one of the rapists]. That was a long night, so I didn't remember. That was kind of awkward. And he meant it in a nice way, of course. He was acting too.