11 best apples for apple pies (and tarts and galettes) 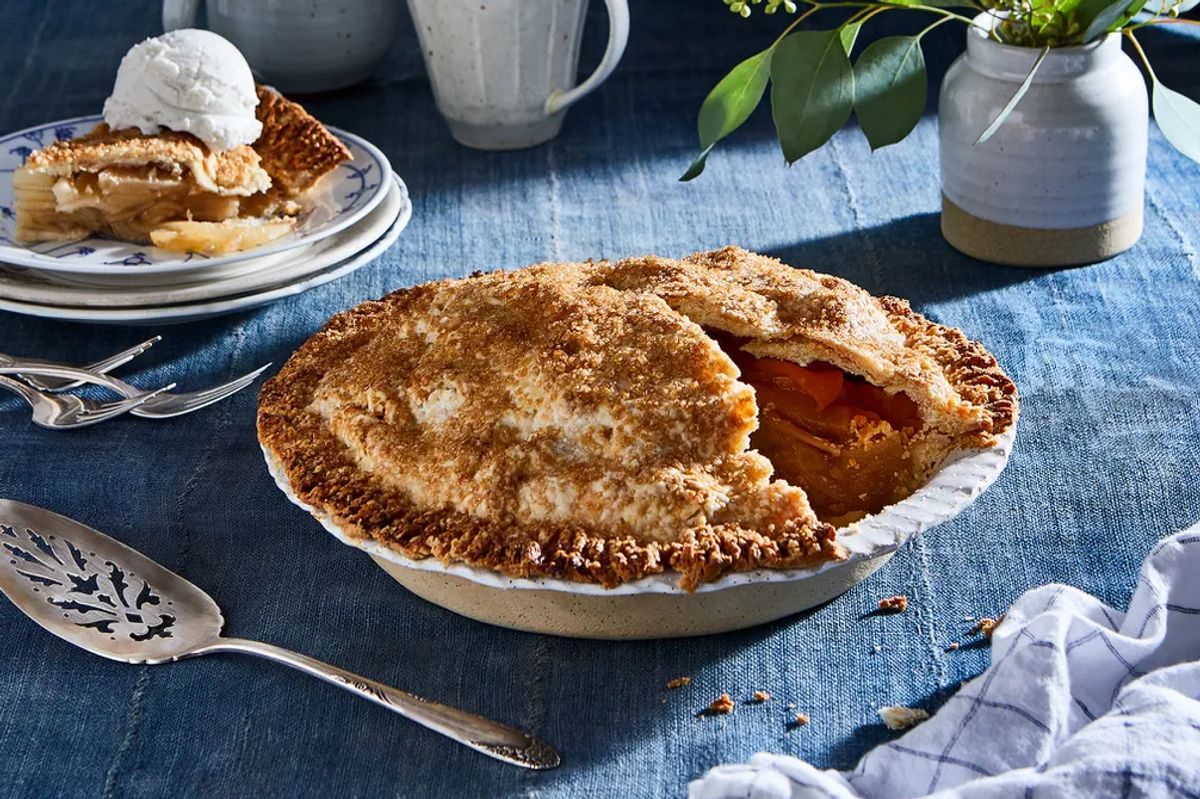 So you want to make apple pie. But which apples are the pie-friendliest? Here, Rowan Jacobsen — a James Beard Award-winner and the author of Apples of Uncommon Character — breaks down the best varieties. Better pies, right this way.

Lucky us. We are in the Second Golden Age of the Apple, with more great new varieties appearing in markets than we've seen in decades. But lost amid the snap-crackle-pop of the produce aisle is a sad little secret: Not all apples are cut out for baking.

For that, we have to hearken back to the First Golden Age of the Apple, the 1700s and 1800s, when more than 7,000 varieties graced American farms, many of them selected specifically for their pie prowess. Although these varieties are hard to find in supermarkets, they are increasingly common at farmers markets, farmstands, and pick-your-own orchards. Combine them with some tricks our ancestors knew well (use several varieties for maximum interest; mix sweet and tart, firm and goopy; and work some leaf lard into the crust), and prepare for pie perfection.

Here are 11 of the best apples for apple pie.

1. Esopus Spitzenberg
"Who would put into a pie any apple but Spitzenberg, that had that?" wrote the famed minister Henry Ward Beecher in 1862. A century and a half later, the question stands. Widely considered the most flavorful apple America has ever produced, the pride of New York's Hudson Valley pushes both sweetness and tartness to an extreme, and infuses your pie with notes of lychee and roses.

2. Bramley's Seedling
Too often Americans make their pies with nothing but overly hard apples, which slide away from each other as soon as your fork strikes. The Brits have long understood that you need some glue to hold the thing together, and for more than 200 years their go-to glue has been Bramley's Seedling. The huge, green, very tart apples look like unripe grapefruits in the tree, but when cooked they melt into a thick pulp that works wonders when combined with a firmer apple. (Honorable Mention: McIntosh or Cortland.)

3. Gravenstein
Love it or leave it. Some people think this treasure of Sonoma County (where you can still find the Gravenstein Apple Fair every August) is too soft for pie, but others believe its unmistakable berry-apple fragrance is the very harbinger of fall. Pick them early for pie.

More: Here are the tools you'll need to bake the perfect apple pie.

4. Belle de Boskoop
This tart and snappy Dutch belle is plump and rustic, with a hint of acidity that mellows in the oven. It will win you over in pies, crisps, and strudel, where the firmness is divine and the zippy edge keeps things lively. (Honorable Mention: Any starchy russet, such as Golden Russet, Roxbury Russet, Ashmead's Kernel, or Zabergau Reinette.)

5. Northern Spy
Your grandmother may well have insisted on Northern Spy for her pies. And she was right. This early-1800s star is one of the few apples that can stand alone in pies. Bright and lively, firm yet tender-skinned, it's experiencing a well-deserved resurgence as a new generation of bakers discovers that no other apple can match its bag of tricks.

6. Pink Lady
Not all modern apples fall flat in pies. Pink Lady is super-crisp when eaten fresh and nearly as crisp in pies, where its rosy hue and sweet-tart balance work wonders. No peeling, please.

7. Granny Smith
Green-skinned Granny Smith apples are juicy and firm, with a puckery-tart taste. Because they're available year-round, they're a reliable back-pocket baking apple for the contemporary home cook. (Worth noting: They make a fantastic apple cake, too.)

8. Golden Delicious
Golden Delicious apples have a sunny, nearly-neon color and a balanced flavor, wonderful for baking. Note: They do tend to soften more than sturdier varieties, like a Pink Lady or Granny Smith, but this makes them great for mixing and matching with other apples.

9. Honeycrisp
This 20th-century apple variety is super sweet and super crisp (hence the name). Food52's Baking Consultant at Large Erin McDowell loves using Honeycrisp apples in her Cider Caramel Apple Pie because they "hold up very well in baking, resulting in a filling that's tender but still has a little bite."

10. Jonagold
Another 20th-century apple variety. This one is a mix of Jonathan and Golden Delicious apples, with a sweet-tart flavor and buttery-yellow flesh. It stands up well when baked — and not just in pie, either. Food52 co-founder Merrill Stubbs loves using Jonagolds for homemade Apple Chips.

11. Braeburn
Braeburn apples look like a sunset, with orange-yellow tie-dye skin. Their intense citrusy-spicy flavor makes them perfect for pairing with other apple varieties or using in big-personality recipes — like Brown Butter & Chedder Apple Pie, or this stunner from Alice Medrich where apples are steeped in a cardamom-lime syrup.

Now, let's get baking. Here are three stellar pie recipes to get started:

While most apple pies use white or brown sugar, this one goes one step further: Start with a quart of apple cider and cook it down into a syrupy caramel sauce.

Not all apple pies have to be sweet. This savory recipe, with pork sausage and a cheddar cheese crust, is perfect for dinner.

Half the crust, twice the fun. If lattice-work worries you, then look no further. This open-faced pie lets the apples get roasty, toasty, and concentrated in flavor.

Additional ideas from the editors:

While you'd expect ingredients like brown butter and cheddar to pull focus from the apples, in this pie they only work to enhance. Both bring a nuttiness that complements the apples' sweetness, and without the distraction of the typical cinnamon-nutmeg-ginger spicing, the apples are able to shine.

Can't decide between a pie and a tart? Call this dessert Hannah Montana, because it brings the best of both worlds. All jokes aside, this tart features a buttery cinnamon-tinged crust full of a gooey, brandy-spiked apple pie filling and is absolutely delicious.

In this recipe you're encouraged to mix and match with apple varieties, so run wild with your newfound fruit knowledge. Toasted hazelnuts, oats, and cinnamon make the crust more akin to a spiced oatmeal cookie than a butter-crust (sign us up!). Paired with tender baked apples and maple-kissed whipped cream, this pie is all we need to round out an evening.

This deep-dish apple pie is as American as, well, you know the saying. We love this recipe because it's got all our favorite apple pie elements in one: a walnut and warm spice-based crumble topping and a buttery, flaky crust. It's also dialed back in terms of sweetness, which lets the apple flavors and nutty undertones really come through.

If baking is not your area of expertise but you still find yourself craving apple pie, galettes should be your go-to. They're freeform, single-crust, and the goal is "rustic," which we all know really just means it doesn't have to look pretty. This recipe is as simple as it gets, and as easy as pie — nay, galette!

For more apple facts, apple recipes, and great writing, pick up a copy of Rowan's book, Apples of Uncommon Character.