Democrats choose failure: Can the filibuster survive a summer of threats?

Whatever happens, Democrats have a more fundamental problem to deal with than the filibuster 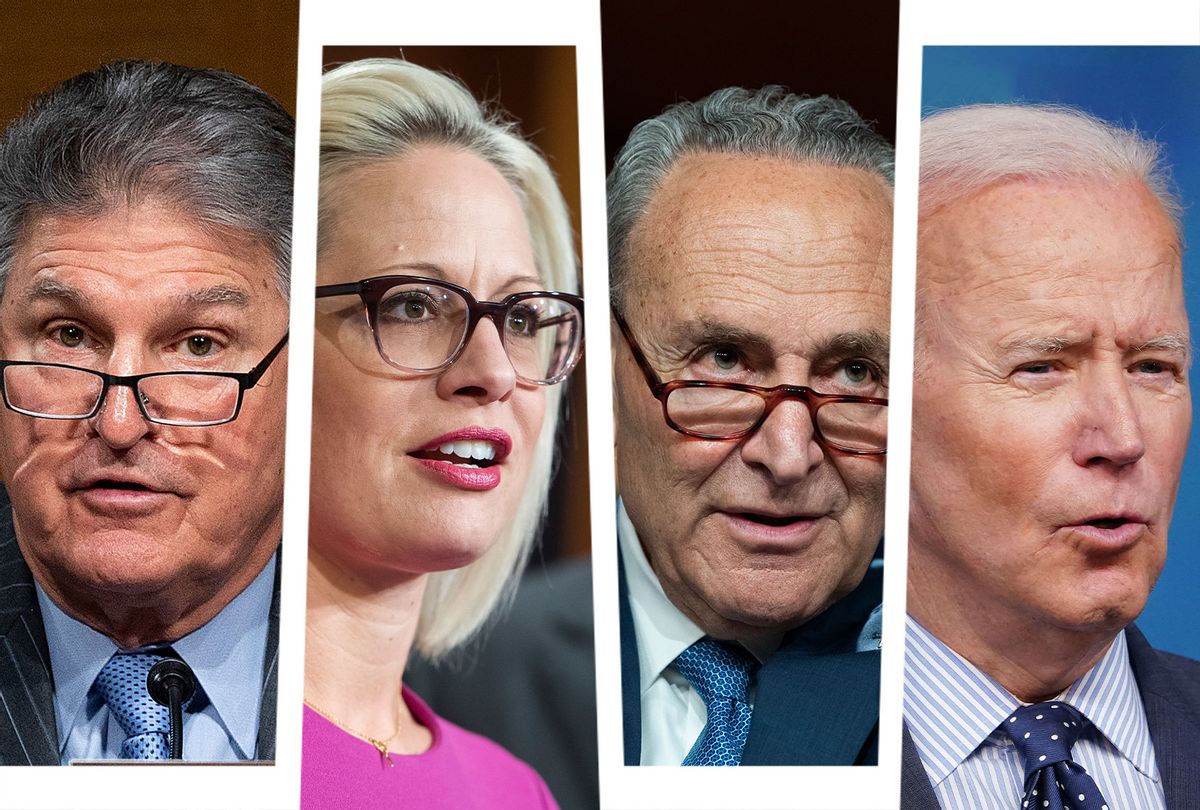 I think we all knew on some level that the grand plans of the new Democratic administration and Congress were going to be tough sledding. After all, the Democrats' congressional majority is about as slim as it can be and the Republican Party has dissolved into mass hysteria and cynical obstructionism. It is not a recipe for easy legislative accomplishment. Considering all of that, it was a good sign that the Democrats were able to get the COVID relief package done quickly and money flowing into the deeply distressed economy on party-line votes. But Senate Minority Leader Mitch McConnell, R-Ky., has now pulled his caucus together and any slim hope of bipartisan cooperation has evaporated.

This is not Donald Trump's doing. He has certainly turned the GOP into a cult organized around his Big Lie, but obstructing Democratic initiatives, even those that they previously championed, has been standard Republican policy for decades now. Ever since the 90s, at least, they have operated under a rule that to allow Democrats even a very slight claim to bipartisanship is to be avoided at all costs. Jacob S. Hacker and Paul Pierson's 2005 book "Off Center: The Republican Revolution and the Erosion of American Democracy" skillfully deconstructed how they managed to accomplish this. Republicans have been at this for a while — and the Democrats have never successfully countered it unless they had a huge majority. (Even then, Democrats go to extreme lengths to avoid the filibuster, as we saw with the tortured passage of Obamacare.)

In fact, there have always been a few Democrats in both chambers of Congress, but most crucially in the Senate, who actually enabled this obstruction by arguing that they were above petty partisanship and would ensure the integrity of the system by being personally independent of all this unpleasant party politicking. Some of you may recall the painful process of trying to pass legislation back in the '90s when you had diva Democrats like David Boren, D-OK, and Bob Kerrey, D-NE, whom you could always count on to be "wavering" over some detail that could blow up the bill. Later, during the Obama years, we had similarly annoying grandstanders like Ben Nelson, D-NE, and Blanche Lincoln, D-AR, gumming up the works over and over again. In the end, they were always pawns of the cunning Republicans who understand the utility of raw partisan power and aren't afraid to use it.

But you will notice that the four I mentioned all came from red states that sometimes were willing to send a certain kind of Democrat to Washington — the conservative kind. This was happening as the old order, which had previously produced northeastern liberal Republicans and Southern conservative Democrats, was breaking down rather dramatically. As the long process of realignment of the two parties finally settled when the old guard leftovers from the 1960s and 70s finally retired, the fundamental problem with the U.S. Senate became clear: There are simply more rural, conservative, small population states than there are urban, liberal large population states and under the rules that govern that chamber, they essentially have veto power over everything. And that is often true even when the liberal, urban, large state party has a majority because the only way they can get one is if some of those conservative states elect conservative Democrats to the Senate.

Today, there are fewer of those than there used to be. And with shifting politics in places like Georgia and Virginia, Democrats have managed to change the dynamic and vote less flamboyantly "maverick" senators into office. But that doesn't mean they don't exist anymore, as we are currently observing with the intense focus on West Virginia Senator Joe Manchin and Arizona's Kyrsten Sinema, who are playing that familiar role in the current Congress.

But today, the stakes are much higher than they've ever been.

Republicans have completely lost even the small attachment they may have once had to our Constitution and our democratic system and are engaged in what can only be described as a slow-moving insurrection, one which I would say actually began in November of 2016. They are leveraging the power Donald Trump's Big Lie has over the GOP base to institutionalize their minority rule through undemocratic subversion of the electoral system and nullification of Democratic votes. Unless the current Democratic Divas agree to eliminate the filibuster, an archaic relic of Jim Crow that was never contemplated by the Constitution, they are very likely to get away with it.

Democratic Party leadership, including President Biden, seem to finally have understood this and they appear to be attempting to cajole and pressure these holdouts. Biden subtly called out Manchin and Sinema in a speech this week and is "negotiating" with Shelly Moore Capito, the Republican senator from Manchin's state, over the infrastructure bill which he almost certainly realizes by now will not garner the 10 GOP votes necessary to kill the filibuster. This indicates that it's really kabuki theatre at this point and he's really negotiating with Manchin to get him to agree to vote for the bill through reconciliation, which only takes 50 votes. (As of Thursday night, Manchin still says no-go to reconciliation.)

Beyond that, the Daily Beast reported on Thursday that Majority Leader Chuck Schumer, D-N.Y., is planning to bring up a slew of bills during the month of June —including S1, the For The People voting rights bill — all of which will fail due to GOP filibusters. Democrats openly admit they are trying to illustrate in living color that the Republicans are intent upon blocking all legislation which they hope will lead the stubborn holdouts to agree to some kind of filibuster reform.

But let's not kid ourselves. It's also possible they want to clear the decks of legislation that more than few Democratic senators don't really want to pass but also don't want to have to vote against, which would not be all that surprising. It's clear that some of the bills they plan to bring up on topics such as LGBTQ rights and gun safety are already non-starters with Manchin so they may not even get to 50. This wouldn't be the first time the Democrats ostentatiously showed off their impotence in a vain attempt to gain conservative votes and please big-money donors.

Whatever happens, I think we have to agree that we have a fundamental, probably insoluble problem and it goes beyond the filibuster.

Our federalist system that gives Wyoming the same number of senators as California simply doesn't work in an age of partisan polarization, particularly when one of the parties is batshit insane and its party establishment is willing to win by any means necessary. Getting rid of the filibuster is absolutely necessary for the survival of our democracy. But it isn't a panacea and I don't see any way to fix the rest of it unless the Republicans come to their senses. What are the odds of that happening?