"States are refusing billions ... that could be spent in local groceries, restaurants, and retail shops." 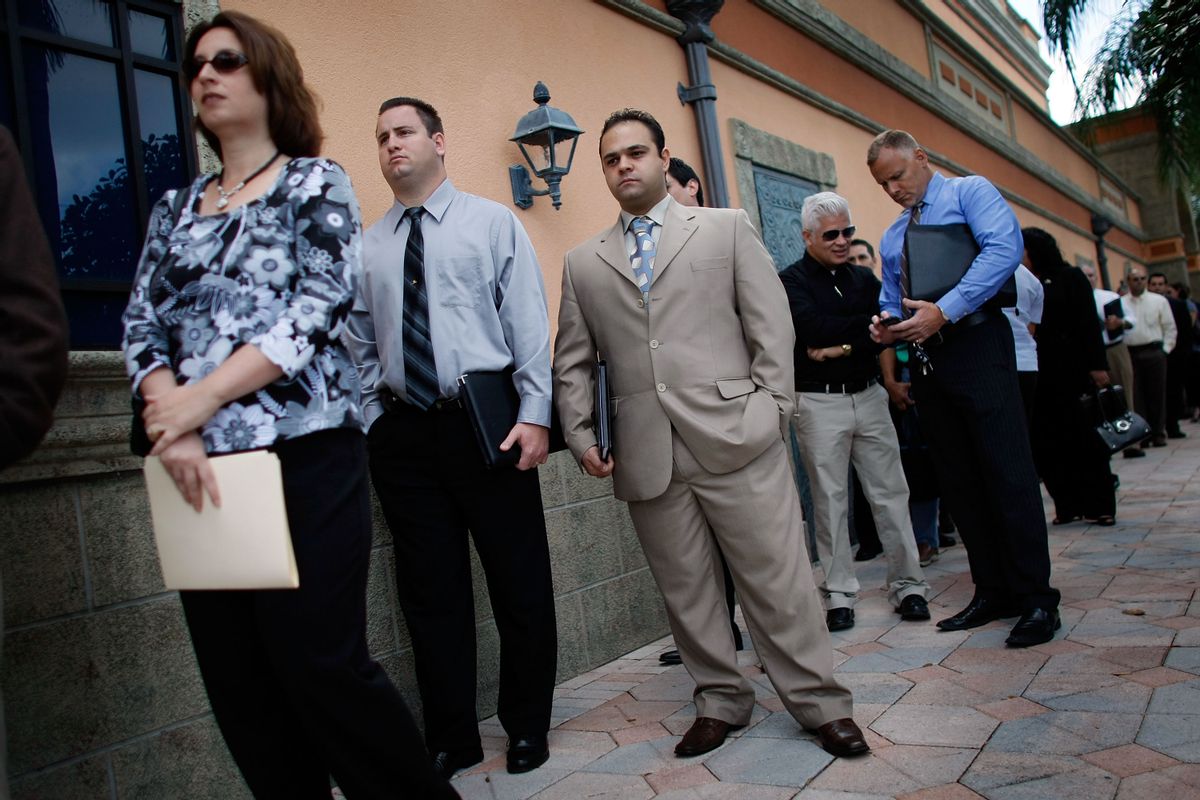 Dawn Dennan, left, Steven Oster, center, and Samer Eleid stand in line with hundreds of other job seekers as they look for jobs at the South Florida Diversity Job Expo in Davie, Florida. (Getty Images)
--

In addition to stripping a key lifeline from millions of jobless workers across the country, Republican governors' plans to prematurely cut off emergency unemployment benefits could cost local economies an estimated $12 billion as previously covered individuals and families lose the extra $300 in weekly federal aid they were using to buy groceries and other necessities.

According to a report (pdf) released Wednesday by the Joint Economic Committee, a congressional panel chaired by Rep. Don Beyer (D-Va.), the decision by dozens of Republican governors to cut off the $300-per-week boost to unemployment insurance "will take over $755 million from UI beneficiaries and their families on average."

"These numbers, while rough estimates, nonetheless probably understate the extent of the economic loss caused by this decision," the report reads. "By ending these programs early, states are refusing billions of already appropriated federal dollars that could be spent in local groceries, restaurants, and retail shops."

The JEC's cost estimate does not include Maryland, which earlier this week became the 25th Republican-led state to announce it will end its participation in the $300 weekly unemployment boost—formally known as Federal Pandemic Unemployment Compensation (FPUC)—that supplemented notoriously low state benefits.

Maryland, along with 20 other GOP-led states, is also opting out of Pandemic Unemployment Assistance (PUA) and Pandemic Emergency Unemployment Compensation (PEUC), federal programs designed to provide aid to jobless gig workers and those who have exhausted their eligibility for state-level benefits. Depending on when the state submitted a notice of withdrawal to the Biden administration, the benefits will officially end between June 12 and July 13.

Originally approved in March 2020 under the CARES Act and extended in subsequent relief packages, the emergency unemployment programs aren't set to expire nationwide until early September.

The JEC warns in its new analysis that "the earlier that states prematurely cut off FPUC, the more money their local economies stand to lose."

"Estimates of the multiplier effect of UI find every $1 in UI generates $1.61 in local spending," the report notes. "Based on this multiplier, localities around the country will miss out on more than $12 billion flowing back into their economies from FPUC-related spending from June 19 to September 5. This estimate does not include the amounts lost to early cancellation of PUA/PEUC, underscoring that the loss to local economies as a result of early termination will far exceed the $12 billion estimate."

In a statement, Beyer said that the unemployment benefits approved at the start of the coronavirus pandemic last year "ensured that tens of millions of Americans were still able to put food on the table, prescriptions in the medicine cabinet, and keep the lights on during one of the worst economic recessions in our nation's history."

"Many of those Americans still remain deeply uncertain about their economic futures as we still remain more than eight million jobs short of where we were pre-pandemic," Beyer added, rejecting Republican governors' widely disputed claim that enhanced unemployment benefits are dissuading people from returning to the workforce.

"There is little evidence that enhanced UI is holding back employment," said Beyer. "In fact, ending it could cost local economies more than $12 billion. If states proceed with their plans to end these critical programs, they will be ripping the rug out from under millions of Americans and further hindering our economic recovery."

The National Employment Law Project and Sen. Bernie Sanders (I-Vt.) argued last month that under the specific terms of the CARES Act, the Biden administration has a legal obligation to continue providing the emergency jobless benefits regardless of Republican governors' actions.

But administration officials have told media outlets in recent days that they believe they are powerless to stop Republican-led states from withdrawing from the aid programs, despite the devastating impact the moves could have on millions of workers and the economic recovery.

"States are canceling federal UI because of a faux panic over the rate of re-hiring—but the economy is already improving, thanks to the money injected by these programs," Andrew Stettner, a senior fellow at the Century Foundation, argued Thursday. "There are surely going to be more ups and downs in our recovery, possibly reflected in tomorrow's jobs report. We must recognize that this economic progress is happening in part because of—not in spite of—federal unemployment aid."

"Total initial claims are still 2.5 times what they were before Covid," Heidi Shierholz of the Economic Policy Institute wrote in a series of tweets responding to the new data. "Many Republican-led states are preparing to cancel pandemic UI benefits. This will not just hurt workers who can't find work or can't work right now, it will hurt the economy in these states, because those benefits are supporting spending. It's terrible economics."