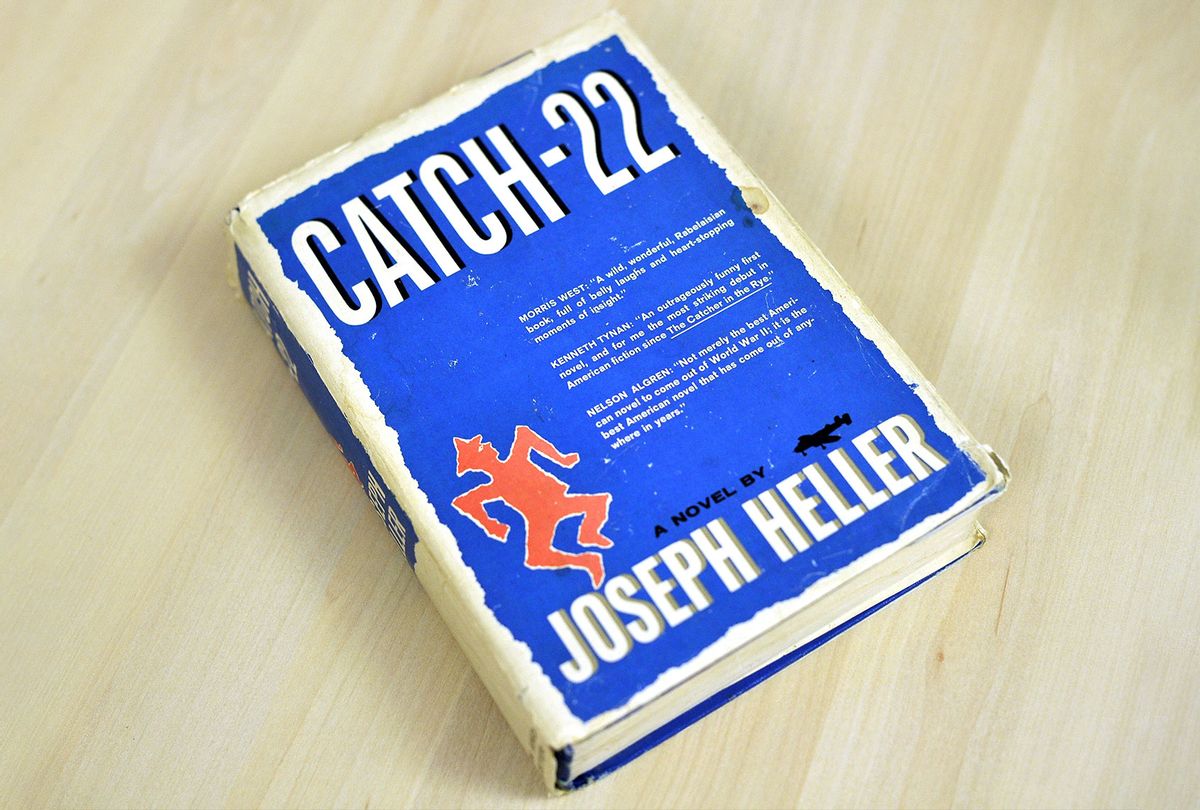 Joseph Heller's 1961 war comedy "Catch-22" is one of the most beloved novels of the 20th century, not to mention one of the funniest. Here are a few interesting bits of information about both how Heller's story came to be and the legacy that it left behind.

1. Joseph Heller sketched out "Catch-22"'s concept and characters in about 90 minutes.

Heller recalled the birth of his most famous novel as if it were a classic movie scene. While lying in bed in his apartment on the West Side of Manhattan in the early 1950s, Heller was struck with what would become the iconic opening line of the story: "It was love at first sight. The first time he saw the chaplain, 'Someone' fell madly in love with him," with "he" and "someone" holding the place for Heller's protagonist's eventual name, Yossarian. Over the course of an hour and a half, he developed the basic plot and collection of characters that he'd ultimately pour into his novel.

2. Joseph Heller wrote the first chapter of "Catch-22" at work the following day.

Heller was an advertising copywriter when he had the idea for the novel. He spent the workday following his creative epiphany, writing out the entire first chapter of what would become "Catch-22" by hand. He submitted the chapter to "New World Writing" magazine by way of a literary agent, and a full year passed before he completed a second chapter.

3. Joseph Heller went through four numbers for the book's title before landing on 22.

The original title of the story, as published in "New World Writing," was "Catch-18." Acquiescing to his publisher's qualms about confusion with the WWII novel Mila 18, Heller dragged his title through a sequence of changes: "Catch-11" (which was deemed too similar to the contemporary film "Ocean's 11"), possibly followed by "Catch-17" (which posed the same problem with Billy Wilder's war movie "Stalag 17"), and then "Catch-14" (which Heller's editor thought just didn't sound funny enough). Finally, everyone landed on "Catch-22".

4. Many of "Catch-22"'s characters were based on Joseph Heller's friends.

Heller was a veteran of World War II, and he based a number of"Catch-22"'s characters on his army buddies. Yossarian's name came from fellow WWII veteran Francis Yohannan. Additionally, the sociopathic Milo Minderbinder was designed with Heller's childhood friend, Marvin "Beansy" Winkler of Coney Island, in mind.

5. Joseph Heller was frequently asked about Yossarian's ethnicity and religion.

The protagonist's ethnic background has been cause for debate since the book's publication. In "Catch-22", Heller introduces Yossarian as Assyrian, despite the fact that his surname suggests otherwise. In response to readers' curiosity, Heller amended Yossarian's heritage in "Catch-22"'s 1994 sequel "Closing Time." In the second book, Yossarian was declared Armenian.

However, the most common question Heller received regarding Yossarian's background concerned his religion, as many readers sought confirmation that the character shared Heller's Jewish faith. In 1972, Heller responded to these quandaries in a letter to Northeastern University professor James Nagel, stating, "Yossarian isn't Jewish and was not intended to be. On the other hand, no effort was expended to make him anything else."

As Nagel writes in a section of "Biographies of Books: The Compositional Histories of Notable American Writings" devoted to "Catch-22," "The early drafts of the novel, particularly the sketches and notecards, have a somewhat more 'Jewish' emphasis than does the published novel. In Judaism, 'eighteen' [the original titular numeric] is a significant number in that the eighteenth letter of the Hebrew alphabet, 'chai,' means 'living' or 'life.' . . .  Thematically, the title 'Catch-18' would thus contain a subtle reference to the injunction in the "Torah" to choose life, a principle endorsed by Yossarian at the end of the novel when he deserts."

7. "Catch-22"was initially only popular on the East Coast.

While "Catch-22"stands today as a universally appreciated political satire, it proved unsurprisingly polarizing in the heated climate of the 1960s. High school and college students, particularly those who lived on the East Coast, were early fans of the novel. As Heller told George Plimpton of "The Paris Review" in 1974, by 1962 sales were dwindling: "'Catch-22' was not making much money. It was selling steadily (eight hundred to two thousand copies a week)—mostly by word of mouth—but it had never come close to the New York Times best-seller list."

A second review from The New York Times called the book "repetitive and monotonous," as well as, curiously, "too short" to properly flesh out its character ensemble. Similarly, The New Yorker accused Heller's prose of "giv[ing] the impression of having been shouted onto paper," adding, "what remains is a debris of sour jokes."

9. Joseph Heller was principally inspired by one novel.

While Heller recognized a number of influences on his writing, including novelists Louis-Ferdinand Céline, Evelyn Waugh, and Vladimir Nabakov, the author once identified a single work that convinced him to write "Catch-22": the dark World War I comedy "The Good Soldier Švejk" by Czech author Jaroslav Hašek.

10. Joseph Heller was accused of plagiarism.

Thirty-seven years after the publication of "Catch-22," the book came under fire for similarities to the 1950 war novel "Face of a Hero." Londoner Lewis Pollock made the connection in 1998 and contacted "The Sunday Times" to condemn "Catch-22" as a rip-off of the obscure Louis Falstein story.

From there, the accusation gained international traction and eventually reached Heller himself. The author rejected Pollock's claims, insisting that he had never read "Face of a Hero" prior to the controversy. Furthermore, his editor combated the theory by asking his interrogators why Falstein, who had only passed away in 1995, would never have broadcast any such concerns if they had borne any weight.

Also defending Heller this time around? The New York Times. Mel Gussow wrote in the paper, "An examination of the two books leads this reader to conclude that the similarities between the two can easily be attributed to the shared wartime experiences of the authors."

One of Heller's more absurd characters is Major Major Major Major, cursed with his unfortunate handle and unfavorable likeness to Henry Fonda. Originally, Heller planned to delve into Major's past in the States. He had written Major Major as a former English teacher from Vermont with a distaste for Henry James.

12. One "Catch-22"​​​​​​​character provides the namesake of a Marvel Comics institution.

The Marvel Comics superhero Isaiah Bradley undergoes a series of experiments during World War II to turn him into a "Black Captain America" at the military base Camp Cathcart, named for "Catch-22"'s rank-climbing soldier, Col. Chuck Cathcart.

After the novel was published in 1961, Heller donated his original manuscript to Brandeis University. The Massachusetts school preserves the document today, and honored the collected works of its author in 2009 on the 10-year anniversary of his death.

While director Mike Nichols' 1970 feature film adaptation of "Catch-22" didn't find huge critical or commercial success, it was hardly as big a failure as the small screen endeavor inspired by Heller's book. In 1973, ABC produced and broadcast a "Catch-22" sitcom pilot starring Richard Dreyfuss as Yossarian. The series never got a second episode. Hulu had greater success, turning the book into a miniseries in 2019.

Journalist John Chancellor, known best as a host and correspondent on NBC Nightly News for 23 years, played host of NBC's "Today" show between 1961 and '62. During his tenure on the daytime program, Chancellor — a fan of Heller's newly published novel — had personalized stickers reading "Yossarian Lives" printed, and pioneered a practical joke of placing them (discreetly) all over the hallways, offices, and bathrooms of NBC's headquarters. He revealed his secret to Heller over a round of drinks following the author's guest appearance on "Today."

For more fascinating facts and stories about your favorite authors and their works, check out Mental Floss's new book, "The Curious Reader: A Literary Miscellany of Novels and Novelists," out May 25!