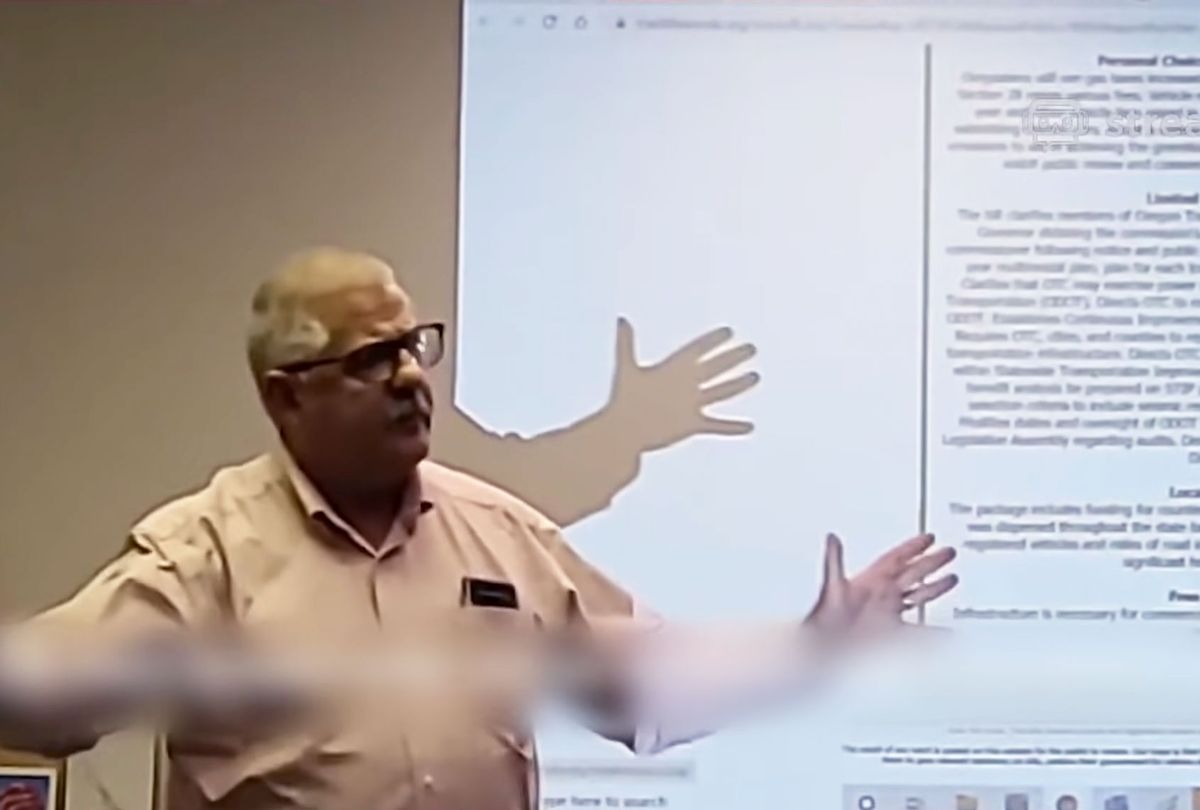 Just days before an angry horde of Trump supporters stormed the Oregon capitol building last year, where they physically accosted law enforcement in an armed standoff, Republican state Rep. Mike Nearman – the lawmaker accused last month of surreptitiously letting the protesters inside – put on a closed-door presentation for his constituents feeding them detailed instructions on how to breach the building. Now his Republican colleagues are calling for his resignation.

But the event takes a strange turn when the conversation shifts to the capitol building's COVID-19 restrictions, which at the time prevented Oregon residents from entering. Nearman then launches straight into an apparently pre-planned list of guidelines on how to forcibly enter the edifice while disavowing each bit of advice.

"We are talking about setting up Operation Hall Pass, which I don't know anything about; and if you accuse me of knowing something about it, I'll deny it," Nearman explained carefully. "But there would be some person's cell phone which might be…but that is just random numbers that I spewed out; that's not anybody's actual cell phone."

The legislator added: "And if you say, 'I'm at the west entrance' during the session and text to that number there, that somebody might exit that door while you're standing there. But I don't know anything about that, I don't have anything to do with that, and if I did I wouldn't say that I did. But anyways that number that I didn't say was…So don't text that number but a number like that."

One man in the audience specifically asks Nearman what time of day would be best to show up. "So if people were to show up at the Capitol," Nearman answered, "you know hypothetically speaking, would it be better to do it during the week or on the weekends because I notice a lot of rallies and things like that happen on the weekends when no one is working?

He concluded: "Wednesday at 10 o'clock in the morning. That's when I am working at the Capitol theoretically if there's a session going on."

Operation Hall Pass would ultimately pan out with relative success nearly a week later on December 21, when a violent throng of protesters brandishing pro-Trump flags breached the building through a door that Nearman exited minutes before their entrance. The demonstrators, who made their way into the vestibule, confronted various law enforcement, chanting threatening the officers and chanting slogans like "enemies of the state." Police alleged that the protesters sprayed chemical irritants at them and threw a smoke-emitting device toward them.

Last month, Nearman was charged with first-degree official misconduct and second-degree criminal trespass for "unlawfully and knowingly perform(ing) an act which constituted an unauthorized exercise of his official duties, with intent to obtain a benefit or to harm another."

Nearman said in a January statement that he doesn't condone violence, though he has not directly talked about the charges made against him.

Nearman, who now faces the threat of expulsion from the body, has since received sharp condemnations from his colleagues in the legislature.

Oregon House Majority Leader Barbara Smith Warner, a Democrat, said that Nearman's actions "are a stain on this state."

"He put the lives of staff members, legislators and Oregon State Police officers in jeopardy," Smith continued. "He is an embarrassment to this institution. He must be held to account."

On Monday, Republicans joined Democrats in calling for Nearman's resignation. "We have to hold ourselves to a higher standard in elected life and his actions do not meet that standard," House Republican Leader Christine Drazan, R-Canby, said in a statement.

Just prior to Nearman's presentation, the Oregon legislator joined a dozen other lawmakers encouraging the state attorney general to back a lawsuit that sought to reverse the results of the 2020 general election.